Get This Book
Visit NAP.edu/10766 to get more information about this book, to buy it in print, or to download it as a free PDF.
« Previous: Kenneth D. Nicholas
Page 188 Share Cite
Suggested Citation:"Franklin F. Offner." National Academy of Engineering. 2002. Memorial Tributes: Volume 10. Washington, DC: The National Academies Press. doi: 10.17226/10403.
× 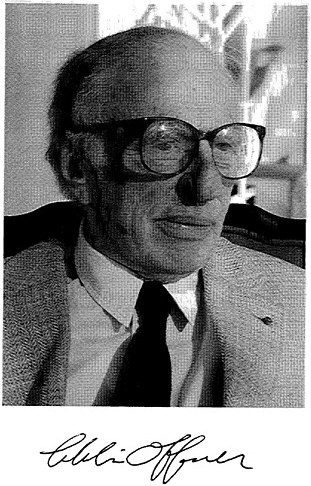 FRANK OFFNER was our colleague, collaborator, and friend. He was also a bona fide genius. It is usually straightforward to give a eulogy. One addresses scientific achievements, honors, and accomplishments and then says what a nice person the departed was. Our task is not so simple—which Frank Offner shall we talk about? Frank the scientist, the inventor, the industrialist, the teacher, or the artist?

Frank was fond of telling stories about his childhood, which according to all accounts, was a happy one. Frank was born in 1911. As a youngster, he was mostly interested in things mechanical, and he guarded the carpenter tools he received at age seven until his sons appropriated them much later. He turned to electronics at age eleven, when he received his first crystal radio. The early infatuation with radios lasted through his teen years, but it was interspersed with a developing fondness for chemistry and near misses of blowing up his home chemistry laboratory. He had excellent science teachers at Milwaukee University School, and they encouraged his obvious talent and native curiosity.

He studied chemistry at Cornell University, but he apparently spent more time on ham radio than in chemistry labs. To understand more about radios, Frank started to concentrate on physics. He also moonlighted in various physics labs, where he began his career as an electronic instrument designer. He graduated

from Cornell University in 1933 with a bachelor’s degree in chemistry and went on to Caltech, where he obtained a master’s degree in 1934 in physical chemistry under Linus Pauling. As Frank was fond of telling, the Caltech education was spectacular and set him up for life with a basic background in physics, upon which much of his later success was built. He excelled among his fellows, passing his qualifying exams with the highest grade and impressing Pauling with his ingenious solution to his master’s thesis problem.

Frank wanted to continue toward a doctorate in theoretical chemistry, but could not financially afford to stay at Caltech. Instead, he secured a small stipend in the physics Ph. D. program at the University of Chicago. While taking courses, he also developed a reputation as the resident electronics expert, and people came to him with problems to solve from all over campus. Eventually he was offered a technician’s job in the laboratory of Ralph Gerard, an early pioneer of bioelectricity Frank designed and built amplifiers, which allowed them to view on primitive oscilloscopes action potentials in the frog’s sciatic nerve. As Frank told it later: viewing these nerve spikes changed his life’s work. He would unravel the mystery of the action potential. That is when he decided to become a biophysicist. Gerard wanted to study the then newly discovered electroencephalogram. To understand this complex signal, it was insufficient simply to view it on the oscilloscope. One needed a permanent record. Frank constructed the world’s first direct-writing oscillograph, using a piezo-crystal to move the pen and thereby achieving excellent frequency response. Soon after this, to enable the recording of EEGs from several electrodes, he constructed the world’s first differential amplifier. The direct-writing oscillograph, equipped with differential amplifiers, was the forerunner of virtually all contemporary EEG and EKG machines. Frank built many of these and eventually licensed his invention of the portable EKG machine to a commercial company for manufacturing.

Meanwhile, there was also thesis work to do. Under the direction of Carl Eckart, in collaboration with Alvin Weinberg and Gale Young, Frank developed a mathematical model of nerve conduction. The model assumed that an electrical resistance

change should accompany the nerve impulse. Such was actually measured in the squid axon by Cole and Curtis in the same year. The theory was published in 1940 and was a starting point for the most influential theory and model in all neuroscience, the Hodgkin/Huxley model of the nerve impulse.

After receiving a Ph. D. in 1938, Frank, with some encouragement from potential customers and with the sum of $500, started Offner Electronics. One of his first projects was the design of an EKG machine to monitor and transmit cardiac electric signals from a free-falling parachutist to ground observers. This was probably the first telemetered biological data. By this time World War II was in full force and Frank wanted to offer his talents to the war effort. He established a long and successful relationship with Hamilton Standard, where he solved the problem of measuring vibrations of propellers. This was necessary to help compensate for these vibrations, and the results hugely advanced propeller design and the success of our aircraft in World War II. Among the many war projects for which he was responsible are infrared missile guidance systems and heat-homing glide bombs, electronic fuel controls for jet engines, and the phase synchronizer for multipropeller planes. Offner Electronics also built many of the scalers, or Geiger counter circuits, used in the Manhattan Project.

After the war, Offner and Offner Electronics returned to the manufacture of EEG recorders. After the invention of the transistor in 1952, Frank was among the first to see its extraordinary potential in electronic circuits, and by 1956 the first transistorized EEG machine was on the market. This, the Type R Dynograph, became the world standard. That year was actually the most important in Frank’s life, for on a business trip to Europe he met and later married his wife, Janine. In 1961 Offner Electronics merged with Beckman Instruments, and Frank began working for the combined outfit. The working styles of Arnold Beckman and Frank Offner were too different for the partnership to last, and in 1963 Frank left industry. He became a professor of biophysics at Northwestern University in the Electrical Engineering Department, where, until he achieved emeritus status some twenty-five years later, he was paid $1 a year.

At Northwestern, Frank continued his exploration of membrane biophysics, publishing a number of models for bioelectric membrane processes; all based on his exquisite understanding of physics and chemistry. Because of the highly mathematical and complex nature of his work, Frank often encountered difficulties with journal reviewers and editors. All of us had occasion to listen to him rail about some poor, stupid soul who couldn’t solve a differential equation if his life depended on it, yet stood in judgment over Frank’s latest intellectual offspring. During the last few years of his active career, he became interested in the auditory system, and one of us worked on several projects together with him.

While there were some difficulties in disseminating his written work, there were also signs of recognition of his extraordinary contributions. Among these were fellowship in the Institute of Electrical and Electronics Engineers and the receipt of the Institute’s Centennial Medal. He was also a Laureate in Technology of the Lincoln Academy of Illinois, a recipient of the Professional Achievement Citation from the Alumni Association of the University of Chicago, and a member of the National Academy of Engineering. And with more than sixty patents, many papers and books, and fresh ideas daily, Frank influenced those of us lucky enough to interact with him. But his influence extends to many others—there is hardly a research lab or hospital lab in the world that does not make use of equipment that can be traced to Offner. Every time you fly on a jet plane, it is the successors of his controllers that keep the engines humming. When you are on a multiengine prop plane, it is his synchronizers that allow the plane to fly smoothly. We hope you don’t fire any heat-seeking missiles, but if you do…remember Frank.

Next: John R. Philip »
Memorial Tributes: Volume 10 Get This Book
×