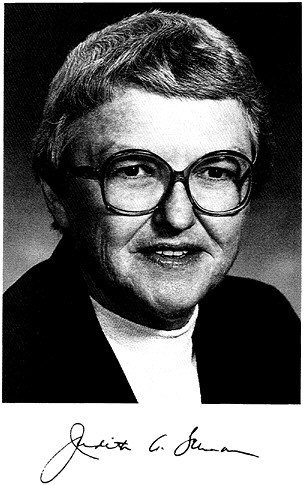 JUDITH A. SCHWAN, for thirty-seven years a driving force in the development of new photographic products and an early example for her colleagues of how much women could contribute to the engineering profession and to the management of technology, died on March 19, 1996, at the age of seventy. Her entire working career was spent at Eastman Kodak Company, where she retired in 1987 as assistant director of the worldwide Kodak Research and Development Laboratories.

Judy was born in Middleport, New York, on April 16, 1925. After graduating from high school, she worked for a year as a billing clerk long enough to know she wanted a greater challenge. She wanted to attend college—she had an early interest in science and said she might have become a high school science teacher. However, World War II changed the landscape. Engineering schools were looking for female students to fill the places normally occupied by men. In 1943 she enrolled in the five-year chemical engineering program at the University of Cincinnati. Upon graduating, she was admitted to the graduate college at Cornell University. By that time, many veterans were returning from the war and resuming their chemical engineering education, and there was a paucity of openings in the engineering school. So Judy majored in chemistry, receiving her master’s degree in physical chemistry in 1950. Even though her advanced

degree was in chemistry, she had taken mostly chemical engineering courses. She said she favored engineering because she liked to make things work and to see how they came out.

Judy joined the Kodak Research Laboratories in 1950 as a research chemist; she began in the Emulsion Research Division, which was the inner sanctum of Kodak research at that time. There was still a lot of “art” in adapting photographic science to the creation of new products, and she quickly made her mark applying engineering thinking to this task. She was awarded more than twenty-one patents from her personal research efforts. These research contributions included improvement in color reproduction by extending the spectral sensitivity of color film; stabilizers and accelerators for color processing; increased light-recording sensitivity of silver halide emulsion; and better signal-to-noise performance in color films. But her major impact came from her leadership in developing new products such as Kodachrome II, Kodachrome 64, Kodacolor II, Kodacolor 400, Ektachrome 400, and Eastman color motion picture products. For her contributions to the movies, she was awarded the Herbert T. Kalmus Memorial Award by the Society of Motion Picture Engineers in 1979.

As a research manager she set an example for hard work, rarely arriving at the labs later than 6:15 A. M. Still she had time to become an excellent golfer. She was decisive, tough (some said blunt), but always fair and good-humored. As a woman in a corporate engineering environment, she earned her promotions in the more difficult days before the gender barriers began to come down for women at Kodak. She was a role model and mentor, an effective but nonstrident feminist, and a career counselor for both men and women.

She was elected to the National Academy of Engineering in 1982. Among her other honors was the Distinguished Alumnus Award of the College of Engineering of the University of Cincinnati, and the Athena Award of the Rochester, New York, Chamber of Commerce.

She served for many years on the board of trustees of St. John Fisher College and was a member of the executive committee of that board. She was elected to the council of the Industrial Research Institute and served from 1979 to 1981. She was a member of the Society of Motion Picture and Television Engineers, the American Chemical Society, and the Society of Photographic Scientists and Engineers. Judy’s church was an important part of her life, and she served her Catholic parish and diocese in a number of lay positions.

She is survived by two sisters, Jane Hirschbeck and Rosemary Trump, and is fondly remembered by her friends and colleagues.

Next: Joseph F. Shea »
Memorial Tributes: Volume 10 Get This Book
×