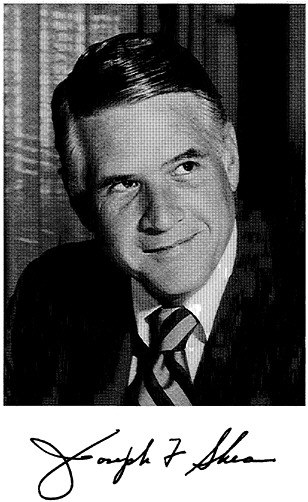 JOSEPH F. SHEA, senior vice-president for engineering at Raytheon Company, and former manager of the Apollo Spacecraft Program Office at the National Aeronautics and Space Administration, died at his home in Weston, Massachusetts, on February 14, 1999.

Joe was one of the great systems engineers of our time and one of my personal heroes. He was a brilliant engineer, a great leader, an outstanding manager, an inspired speaker, and a great intellect. One of his many contributions to Apollo was the decision to base the mission on rendezvousing in lunar orbit. This decision was central to a successful lunar landing in the decade, and it is a tribute to Joe’s logic and leadership that he was able to build a consensus among the three space centers, Marshall Space Flight Center, Cape Canaveral, and Johnson Space Center, at a time when they never agreed on anything.

Joe was born in the Bronx, New York, on September 5, 1926. He served in the U. S. Navy from 1944 to 1947 and was commissioned an ensign in 1946. He was a graduate of the University of Michigan, where he earned bachelor’s degrees in engineering and mathematics, and a master’s degree and a doctorate in engineering mechanics. He also taught at the university from 1949 to 1950 and again from 1953 to 1955.

From 1955 through 1959, Joe was a military development engineer at Bell Telephone Labs in Whippany, New Jersey. In that position he was intimately involved in direction of the project that led to the development of the extremely accurate radio-inertial guidance system employed in the Titan I intercontinental ballistic missile. He contributed a considerable amount of engineering innovation and project management skill and was directly responsible for the successful development of this pioneering guidance system.

From 1959 through 1961 as director of advanced research and development and program manager of the inertial guidance system development project for the Titan II ICMB, Joe was responsible for a number of significant engineering achievements, in particular the introduction of then-new technology relating to the design and development of solid-state power generation systems in long-life operational guidance equipment. This feature was a major factor in the reliability and continuing readiness of the still-operational Titan II ballistic missile weapon system, which is a major element of the current strategic deterrent missile force in the United States.

In 1962 Joe joined NASA and at first had the systems responsibility for Apollo and later became the project manager at the Manned Spacecraft Center for both the capsule and the lunar module. He was responsible for the definition of the basic design concept for the Apollo lunar landing mission, including the Apollo spacecraft command and service modules and the lunar module. He was the chief engineer of the design and development effort for lunar spacecraft, and directed the extensive spacecraft test and evaluation program. Joe directed the initial Apollo conceptual studies, which established the technical feasibility and advantages of the Lunar Orbit Rendezvous technique, which had a major impact on the ability to achieve the Apollo objectives on-schedule and with minimum development and mission risk. He directed the spacecraft development

program through the most critical development phases. He contributed personally and directly by making key decisions regarding engineering and scientific applications, and actively directed the critical system tradeoffs and integration among spacecraft development, flight crew operations, and overall Apollo flight operations.

At NASA, Joe made outstanding contributions to the establishment of the basic Apollo lunar mission concept, and he directed the initial design, development, and test of the Apollo spacecraft command and service modules. His technical skills and managerial abilities contributed in a significant way to the final successful achievement of our national goal of landing men on the Moon and return them safely to Earth before the end of the decade of the 1960s.

Joe continued his public service activities after having entered the private sector. He chaired a task force established by NASA Administrator Daniel S. Goldin in 1993 to review plans for the Hubble Space Telescope servicing mission and the Defense Science Board Task Force on Countermeasures and Defense Suppression and served as a member of the Division on Engineering and Physical Sciences Aeronautics and Space Engineering Board of the National Research Council. In 1964 Joe received the Arthur S. Flemming Award as one of the ten outstanding young men in government for directing the studies that led to the selection of lunar orbit rendezvous as the mission mode for the Apollo moon landings. The Massachusetts Institute of Technology named Joe the 1989 Jerome C. Hunsaker Visiting Professor of Aeronautics and Astronautics.

Next: Robert S. Silver »
Memorial Tributes: Volume 10 Get This Book
×