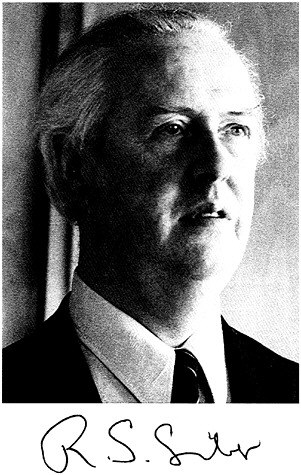 Bob was born in 1913 in Montrose, where his family had a laundry business. He studied natural philosophy at Glasgow University, where he received his M. A. and B. Sc. degrees (1st Class Honors). He continued his studies for the Ph. D. , specializing in gaseous combustion.

During World War II his major work at G. & J. Weir Ltd. was with the Admiralty, improving warship pumps, boilers, and the small onboard immersed-tube desalinators. He had a long career in research and development, working for the Gas Research Board, Imperial Chemical Industries. He worked for the Federated Foundries Ltd. in 1948, the John Brown Land Boilers Ltd. in 1954, and then returned to the G. & J. Weir Company. He returned to academia, after a successful career in industry, to become a professor of mechanical engineering at the Heriot-Watt University in Edinburgh and later to become the James Watt Chair at Glasgow University, from which he retired in 1979.

Immediately after the war, he turned his attention to the redesign of the ubiquitous coal-burning fireplaces, which were used in homes and offices all over the United Kingdom. His analysis

of the heat balance of these fireplaces resulted in redesigns that saved tons of coal and helped reduce air pollution.

From 1956 to 1962, while working at the G. & J. Weir Company, he invented the Multistage Flash (MSF) Distillation System. This invention resulted from a careful analysis of the sources of entropy in various systems for water purification. Today the method of analysis he used is called “Second Law Analysis,” but when he applied it to seawater demineralization, it was a novel idea. The first MSF plant was sold in Saudia Arabia, and Bob worked tirelessly to bring it on line, oftentimes at great risk to his health. It was dangerous to be inside the large flash chambers in the blazing Mideast sun. That plant established the commercial viability of the MSF process and its design was duplicated in many places. Multistage flash distillation represented an improvement in thermal efficiency of about two and one-half times. It also made practical the design of very large plants, upwards of millions of gallons per day of freshwater production. A one-million-gallon-per-day plant, based on the same principle, was built in San Diego as a demonstration plant by the U. S. Office of Saline Water, in the early 1950s. That plant was later dismantled and shipped to Guantanamo Bay, where it is still in use. It was always a source of bitterness for Bob Silver that because the G. & J. Weir Company failed to patent the design, many plants were built that did not have his care and attention, and, consequently, did not reach the efficiency and economy that was possible.

In 1962 he retired from the G. & J. Weir Company to become a professor of mechanical engineering at the Heriot-Watt University in Edinburgh. This was a difficult decision for him, as he had a great love for education and at the same time wanted to remain active in seawater demineralization. He wrote fundamental papers on the theory of condensation of pure liquids, on combustion, and on explosives.

In 1967 he returned to Glasgow University to become the James Watt Professor of Engineering. There he established a research program in seawater demineralization, to which students came from all over the world. Even after his retirement and passing, students still come to the center.

In 1971 he published a treatise on thermodynamics, developing the subject in a novel way, reflecting his many years of design experience.

He received many honors and awards, of which the following is a partial list:

Bob Silver had a great love of things Scottish. He was an avid fisherman and spent many hours on the Island of Mull, where he and his wife, Jean, had a summer home.

corporating two new scenes and other additions written for the Edinburgh Festival production of 1991. His play The Picture was staged in London and is still popular among many amateur companies.

A copy of his book Conflict and Contexts, published by Chapman, lies on my desk as I write. Among other things, it contains poems dedicated to his wife, Jean. They were married in 1937 and remained together for fifty-one years. I lift the first two and last two lines from this poem, dedicated to her after her death in 1989:

From Curacao I talked to you in Mull

And touched you thus. I cannot touch you now.

My personal memory of Bob is that of a great conversationalist, whose wit and humor made each meeting too short. He could discourse intelligently on topics from theoretical physics and engineering to politics, economics, and religion. He was a stimulating and steadfast friend.

Bob is survived by his two sons, Colin and Alasdair, and his grandchildren Robbie and Catriona.

Next: Werner Stumm »
Memorial Tributes: Volume 10 Get This Book
×