Get This Book
Visit NAP.edu/10766 to get more information about this book, to buy it in print, or to download it as a free PDF.
« Previous: Werner Stumm
Page 228 Share Cite
Suggested Citation:"Victor G. Szebehely." National Academy of Engineering. 2002. Memorial Tributes: Volume 10. Washington, DC: The National Academies Press. doi: 10.17226/10403.
× 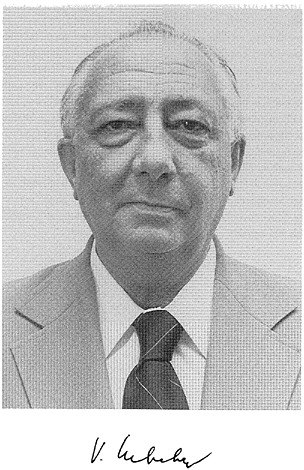 VICTOR G. SZEBEHELY, professor of aerospace engineering and engineering mechanics at the University of Texas at Austin, died on September 13, 1997, at the age of seventy-six. Victor was admired and respected throughout the celestial mechanics and aerospace community. His contributions were both fundamental and extensive. His unassuming manner, which concealed a giant intellect, endeared him to all his colleagues and students.

Victor was born in Budapest, Hungary, in 1921. He managed to survive the Nazi occupation as a student and professor at the Technical University of Budapest. He received his M. S. degree in mechanical engineering in 1943 and his doctor of science degree in 1945 with a dissertation on the “three-body problem. ” (It would be almost twenty years before he would return to this most favored topic. ) He was an assistant professor during the last years of the war, teaching mathematics and writing five books. between 1944 and 1947: Calculus for Engineers (two volumes with two editions), Exercise in Analysis (two volumes), and Graphical Methods in Applied Mathematics. Then he immigrated to Canada— one of a generation of scientists who emigrated from Europe after World War II. (I don’t remember Victor ever talking about life in Hungary in the war years, but he did keep in touch with many colleagues there throughout his life. )

Victor spent a year in Canada as a lecturer at McGill University in Montreal and then moved to the United States as a research assistant at Pennsylvania State University. In 1948 he went to the Virginia Polytechnic Institute and spent three years as an associate professor teaching fluid mechanics and dynamics.

Then began a six-year period from 1951 to 1957, during which he had three major responsibilities: lecturer at the University of Maryland, professorial lecturer at George Washington University, and manager of ship dynamics research at the David Taylor Model Basin. In 1954 he became a citizen of the United States. Two years later in 1956, a dimensionless number used in time-dependent unsteady flows was named “Szebehely’s number,” and in 1957 he was knighted by Queen Julianna of the Netherlands.

The year 1957 was also the year of the Russian Sputnik and the advent of the space age. Victor returned to his first love, orbital mechanics. He was appointed manager of space dynamics research at the General Electric Company Space Sciences Laboratory in Philadelphia, Pennsylvania. He also was a summer institute lecturer at Yale University. Then, in 1963, he went back to the academic world for good—first, as a visiting and then an associate professor at Yale University. He concentrated his teaching and research on celestial mechanics, with particular emphasis on the three-body problem and produced a wealth of contributions for which he will always be remembered.

His final move was to join the faculty of the University of Texas at Austin in 1968. He served as chairman of the Department of Aerospace Engineering and Engineering Mechanics from July 1977 to September 1981 and held the Richard B. Curran Centennial Chair of Engineering.

Victor was recognized for his many outstanding achievements by the American Astronautical Society (AAS) with the Dirk Brouwer Award in Celestial Mechanics and was named the first Brouwer Lecturer of the Dynamical Astronomy Division of the AAS at the 151st meeting of the Society in January 1978. Earlier in the September and October 1977 issues of the journal Celes tial Mechanics, volume 16, an equation used to determine the gravitational potential of the earth, planets, satellites and galaxies was named “Szebehely’s equation. ”

The proceedings of the Seventh International Conference on Mathematical Methods in Celestial Mechanics were dedicated to him on the occasion of his sixtieth birthday (1981). The next year he was elected to membership in the National Academy of Engineering, and in 1984 he was elected a fellow of the American Institute of Aeronautics and Astronautics.

An avalanche of honors followed: the Vanderlinden Award of the Belgian Royal Academy for scientific activities in 1987, and honorary doctor degree from Eötvös University of Budapest in 1991, election to membership in the European Academy in 1992, the Hocott Distinguished Centennial Engineering Award from the University of Texas in 1992, and the General Electric Senior Research Award from the American Society of Engineering Education in 1994.

Victor’s major opus, Theory of Orbits, was published by the Academic Press in 1967 and reprinted in 1977. There was also a Russian translation by Duboshin and Romashov. It was an advanced reference text on the restricted problem of three bodies with theories and applications concerning periodic orbits, space trajectories, stability, and dynamical astronomy. His last book was pleasant, enjoyable, and eminently readable with the intriguing title Adventures in Celestial Mechanics. A second and expanded edition was published in 1998 by Hans Mark, a friend and colleague, the year after Victor passed away.

I first meet Victor when the Summer Institute of Dynamical Astronomy was held at the Massachusetts Institute of Technology in 1968 and 1969. He had a marvelously droll sense of humor and was a truly delightful person to know. My wife, Marge, and I enjoyed a pleasant evening with Victor at a lobster cook-out on an island in Boston Harbor that summer in 1968. Later, when I told Victor that I was presenting a paper in Budapest at the 34th Congress of the International Astronautical Federation in October of 1983, he volunteered to write several of his Hungarian friends. Three of them contacted us during our stay in Budapest, and each gave us a private tour of his favorite haunts in and around the city. We remember fondly two wonderful evenings with Béla Balázs and his charming wife both in Budapest and in Vienna.

I recall with fondness a talk Victor gave during a plenary session at one of the astrodynamics conferences a few years ago. It concerned the chaos exhibited in the three-body problem that was a totally new phenomenon to me. I, together with the rest of the audience, was fascinated indeed. It was a pleasure to watch a real master make such a wonderful presentation.

I last saw Victor in Halifax, Nova Scotia, Canada, at an astrodynamics specialists meeting in August 1995. I learned of his death from one of my Massachusetts Institute of Technology students, who had done her undergraduate work with Victor the previous June at the University of Texas. It was sad news indeed.

Victor Szebehely was a wonderful friend, unpretentious, generous, and kind. It was a pleasure to know him, and he will be truly missed.