Get This Book
Visit NAP.edu/10766 to get more information about this book, to buy it in print, or to download it as a free PDF.
« Previous: Frank Whittle
Page 260 Share Cite
Suggested Citation:"F. Karl Willenbrock." National Academy of Engineering. 2002. Memorial Tributes: Volume 10. Washington, DC: The National Academies Press. doi: 10.17226/10403.
× 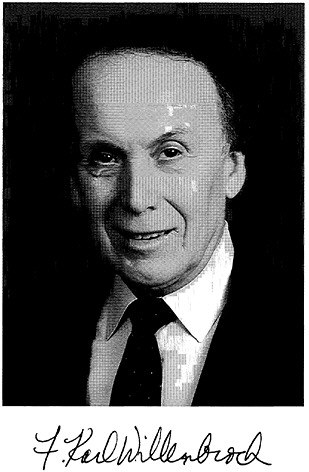 Karl was born in New York City and started his engineering career with the bachelor’s of science degree with highest honors at Brown University. He completed his formal education with the master’s and doctoral degrees in applied physics from Harvard University.

Karl remained at Harvard until 1967 as a research fellow, lecturer, laboratory director, and associate dean. During this period, he took responsibility for running the undergraduate and graduate engineering programs, while at the same time he was deeply involved in teaching.

In 1967 Karl moved for three years to the position of provost and professor of engineering and applied science at the State University of New York at Buffalo. Here, as one of the two leaders of engineering programs in SUNY, he brought a vision of the role of engineering at a public university—the important relations with statewide industry to complement the academic programs and the critical coordination of SUNY degree programs with the two-year colleges and the secondary schools. In addition, he led the expansion of the Buffalo program in the emerging information sciences.

Karl’s next position was as director of the Institute of Applied Technology at the National Bureau of Standards (NBS). Here he directed the NBS work in several critical areas at a time when engineering was just beginning its concern with sociotechnical problems.

This work included fire prevention and research, the applications of operations research to urban and municipal problems, and the development of basic specifications for manufacturing techniques in electronics.

These activities contributed to the evolution of a proactive role in the National Bureau of Standards and, more broadly, the Department of Commerce. Well after Karl’s departure, the NBS name was changed to the National Institute of Standards and Technology (NIST), and the agency mission was broadened to encompass many of the ideas that Karl first envisioned.

Karl continued the unusual combination of academic and government service with his 1976 move to the position of dean of engineering and Cecil and Ida Green Professor of Engineering at Southern Methodist University, where again the academic programs were closely allied with the work of regional industry.

In 1986 Karl left the university for a three-year stint as executive director of the American Society for Engineering Education, where he brought his vision of the central role of engineering education in the evolving information revolution in industry. This leadership role continued until his retirement with two years as National Science Foundation assistant director for scientific, technological, and international affairs, senior scientist in the Technology Administration at the Department of Commerce, and visiting professor of engineering and public policy at Carnegie Mellon University.

Throughout his career, Karl served frequently as a consultant to industrial and governmental organizations. He was a leader, as well, in professional societies—for example, as president of the Institute of Electrical and Electronics Engineers. He had a variety of committee responsibilities at the National Academy of Engineering, including membership on the Council of the NAE from 1980 to 1986.

For those of us who were among his many friends and admirers, Karl was always on the lookout for new directions in which the engineer’s approach and analysis opened the doors. His total commitment to his work led to his unwavering enthusiasm for new ideas. It was not unusual to receive a phone call from Karl on an early Sunday evening when he had thought of a novel way in which engineering might contribute to human welfare.

Next: Chia-Shun Yih »
Memorial Tributes: Volume 10 Get This Book
×