Get This Book
Visit NAP.edu/10766 to get more information about this book, to buy it in print, or to download it as a free PDF.
« Previous: Chia-Shun Yih
Page 276 Share Cite
Suggested Citation:"Charles A. Zraket." National Academy of Engineering. 2002. Memorial Tributes: Volume 10. Washington, DC: The National Academies Press. doi: 10.17226/10403.
× 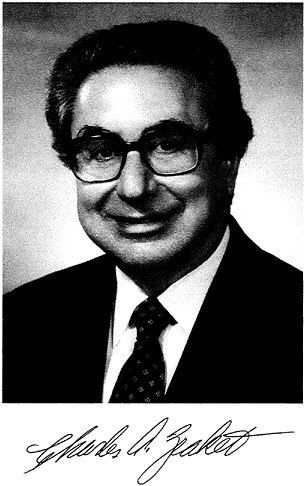 Charles A. Zraket is one of the pioneers in the field of information systems engineering who continued to expand his interests and contributions as the field developed and grew. Charlie was one of a small number of engineers working on the new digital computers in the early 1950s. In 1951, while still a student at MIT, Charlie joined the pioneering MIT Digital Computer Laboratory, beginning a career that spanned the revolutionary developments in digital computing hardware and software. As a member of the MIT group that built the Whirlwind computer (now in the Smithsonian Institution), he designed the hardware and software system that permitted the machine to accept real-time inputs, a truly groundbreaking effort at that time. When the MIT Lincoln Laboratory was formed, he served as a group leader in the Digital Computer Division until 1958. Without the operating systems common today, Charlie and his co

workers at MIT Lincoln Laboratory designed and tested the weapons direction and intercept guidance system for the prototype air defense system called the Cape Cod System. He led the group responsible for design of the planned operational air defense system (SAGE) and the formulation of the operational and mathematical specifications for the SAGE system. This experience contributed to the development of tools for software development and provided an important forerunner for the large software industry today.

In 1958 the development work at MIT Lincoln Laboratory had demonstrated the feasibility of an air defense system using the new technologies of digital computing, digital communications, and advanced radar in an integrated system, and the first centers of the SAGE system were declared operational. Charlie became one of the founding members of a new nonprofit company, named MITRE, spun off by MIT to carry on further developments in air defense and other computer-based military systems. At MITRE, Charlie’s work on SAGE led to his involvement in numerous other military systems employing communications, command, control, and intelligence (C3I). Always looking for new challenges, Charlie founded the Civil Systems Division of MITRE, which provided information systems engineering to civilian agencies such as the Federal Aviation Administration, the National Aeronautics and Space Administration, and the Environmental Protection Agency. He became president and chief executive officer of MITRE in 1986 and retired from MITRE in 1990.

Following his retirement, Charlie continued as a trustee of MITRE and became a scholar-in-residence at the Center for Science and International Affairs of the Kennedy School of Government, Harvard University, served on the boards of several not-for-profit and for-profit organizations, and was an active volunteer with the National Academy of Engineering and the National Research Council.

Charlie transferred his experiences and wisdom through numerous advisory activities, including service with the Defense Science Board; the Science, Technology, and Public Policy Program, Harvard University; the Center for Arms Control and In

ternational Security, Stanford University; the Center for Naval Analysis; and the Hudson Institute.

Charlie Zraket was elected to the National Academy of Engineering in 1991. His citation reads, “For significant engineering contributions related to information systems and national defense. ” Charlie was a fellow of the American Academy of Arts and Sciences, the American Association for the Advancement of Science, the American Institute of Aeronautics and Astronautics, and the Institute of Electrical and Electronics Engineers. Charlie was also a member of engineering honor societies Tau Beta Pi, Eta Kappa Nu, and Sigma Xi.

For the National Academy of Engineering, he served on the 1997 Nominating Committee, the Committee on Membership (1995 to 1997), and the Special Fields and Interdisciplinary Engineering Peer Committee (1993 to 1996). His service for the National Research Council preceded his election to the NAE and continued afterward. He was a member of the Commission on Physical Sciences, Mathematics, and Applications and served on many committees. One of special importance was the Panel to Review Earth Observation System Distribution (EOSDIS) Plans (1992 to 1993), which he chaired, combining his systems engineering talent and his interest in the environment.

Charlie was awarded an honorary doctorate of engineering by his alma mater, Northeastern University, in 1988. He received the MIT Distinguished Corporate Leadership Award in 1985 and was awarded the Department of Defense Medal for Distinguished Public Service. He has also been awarded the American Institute of Aeronautics and Astronautics Reed Aeronautics Award for 1993 and the Air Traffic Control Association Medallion Award for outstanding contributions to the science of air traffic control.

Charlie was a hard worker with many interests and gave his time and energy to many people and organizations. Charlie was a “doer,” one of his greatest characteristics. He was smart, street wise, energetic, and well organized. When he took responsibility for a job, and he took on many, the work was done well and promptly. As a result he was in great demand and had admirers around the world. He spoke and wrote often on both technical and policy matters and served on numerous boards, including

BankBoston, Emerson Hospital, the Computer Museum, and the Volvo advisory board. His many interests ranged from defense research and development through arms control to energy and environmental policy.

Despite his many public commitments, Charlie always had time for his wife and his four children as well as his extended family, which included his younger brothers and their families. Charlie was head of the clan and was never too busy to provide help and counsel. He enjoyed people and had many friends, ranging from Herman Kahn, the futurist, to Bob Berks, the sculptor. Kahn chose him for the board of his Hudson Institute while Berks presented him with a bronze likeness. Charlie enjoyed a lively debate with friends and coworkers, often over a dinner.

One of his great pleasures was golf, which he enjoyed wherever he happened to be. Charlie was a money player in golf as in life. He played best when the chips were down.

Only a few of his close friends knew all of his interests and accomplishments, but all of us will miss him and continue to regret that we did not know him better.

Next: Appendix »
Memorial Tributes: Volume 10 Get This Book
×