Get This Book
Visit NAP.edu/10766 to get more information about this book, to buy it in print, or to download it as a free PDF.
« Previous: J. Lewis Blackburn
Page 28 Share Cite
Suggested Citation:"J. Keith Brimacombe." National Academy of Engineering. 2002. Memorial Tributes: Volume 10. Washington, DC: The National Academies Press. doi: 10.17226/10403.
× 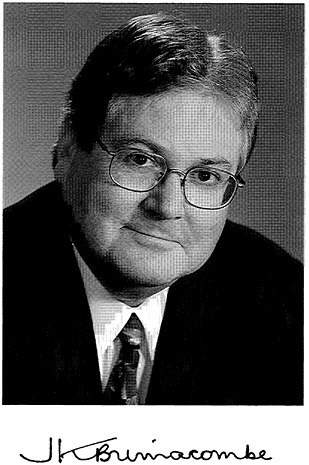 J. (JAMES) KEITH BRIMACOMBE (NAE foreign associate elected in 1997), died suddenly of a heart attack on December 16, 1997, at Vancouver, British Columbia, Canada, at age fifty-four. He was president and chief executive officer of the newly established Canadian Foundation for Innovation and was on leave from the University of British Columbia (UBC), where he was Alcan Chair of Process Engineering and founding director of the Centre for Metallurgical Process Engineering.

Professor Brimacombe was born in Windsor, Nova Scotia, on December 7, 1943. He received his B. A. Sc. degree (with honors) in metallurgical engineering from UBC in 1966, a Ph. D. degree from Imperial College, University of London in 1970, and an honorary doctorate from the Colorado School of Mines in 1994. He served as a visiting professor at the Massachusetts Institute of Technology from 1992 to 1993 and was a professional engineer in British Columbia.

cal, and Petroleum Engineers (AIME). He was also a member of the Association of Professional Engineers of British Columbia, the American Society for Metals (ASM) International, the Institute of Metals (Great Britain), the Iron and Steel Institute of Japan, the Society of Mining, Metallurgy, and Exploration (SME/ AIME), and Sigma Xi. He was a member of both the Canadian Academy of Engineering (fellow) and the U. S. National Academy of Engineering (foreign associate).

Dr. Brimacombe received twenty-eight major awards from Canadian, U. S. , and overseas professional groups and nineteen awards for best paper from professional engineering societies. Among the many awards and distinctions he received were the following:

His award of the prestigious Canada Gold Medal for Science and Engineering cited him as “one of the innovative giants of 20th century metallurgical process engineering and a role model for young Canadian scientists and engineers. ”

In his obituary, officers of the Iron and Steel Society noted that “Keith possessed a rare combination of intellect, energy and engaging personality, which made him extremely popular and

effective as a leader,” and “Keith’s untimely passing is tragic and has robbed the iron and steel industry of one of its most brilliant and dynamic champions. ” His work and his reputation crossed many borders, especially between Canada and the United States.

Professor Brimacombe, at the time of his death, was one of the world’s most outstanding process metallurgists. He excelled in teaching, educated more than sixty graduate students, and dedicated his career to developing the intellectual potential of those students he taught or whose research he directed. In his research he used mathematical models, together with laboratory and industrial measurements to understand complex process phenomena in both ferrous and nonferrous metallurgy. His studies led to world-recognized advances and cost savings in such diverse processes as the casting of metals and fused refractories, ladle refining of steel, calcination of limestone, roasting of ore concentrates, flash smelting of copper and zinc concentrates, and extrusion processes and microstructural development of steel and aluminum. The watchword of his research was the application of good science and engineering to the solution of practical problems, and he played an important role in building bridges between academia and industry. More than seventy-five metallurgical and allied firms sought out his advice, and his consulting activities allowed him to focus on real problems in need of a solution. He was a dynamic and visionary force in developing the outstanding materials processing program at UBC and founding the university’s superb $21 million advanced materials and process engineering laboratory. This facility is certainly one of the finest of its kind at a North American university. In addition to more than 300 publications, he also disseminated his research results through short courses at UBC, at professional society meetings worldwide, and at many industrial sites. His annual course on the continuous casting of steel would typically attract over a hundred participants.

Even before his election to the National Academy of Engineering, Brimacombe had made important contributions to the National Materials Advisory Board of the National Research Council (1992 to 1997). He was an excellent committee mem

her because his comments were always perceptive, well thought out, and based on reliable and timely information.

In a memorial to Keith Brimacombe, John Evans, chairman of the Canadian Foundation for Innovation noted that when Keith was approached to lead the newly established foundation, he offered to serve without hesitation, saying that he had received so much from Canada in his career that he welcomed the opportunity to give something back to help others. Evans also noted that Brimacombe cared deeply for those with whom he worked; to which we can add “Amen. ”

Since his death, the Brimacombe Foundation has been established in his honor at UBC to recognize young materials process engineers and to establish a Brimacombe Scholars Program for research in academia or in industry. In addition, a Brimacombe Memorial Symposium was held in Vancouver, on October 1–4, 2000, sponsored by those professional societies where he had previously served as president, MetSoc of CIM, ISS, and TMS. Nine foreign mining and metallurgical societies representing Australia, China (2), France, Germany, Great Britain, Hungary, Japan, and South Africa also served as conference cosponsors in tribute to Dr. Brimacombe.

Dr. Brimacombe is survived by his wife, Margaret; two daughters, Kathryn and Jane; his mother, Jean Scullion; and his sister, Margaret McKeowen.

Next: Gordon S. Brown »
Memorial Tributes: Volume 10 Get This Book
×