Get This Book
Visit NAP.edu/10766 to get more information about this book, to buy it in print, or to download it as a free PDF.
« Previous: J. Keith Brimacombe
Page 34 Share Cite
Suggested Citation:"Gordon S. Brown." National Academy of Engineering. 2002. Memorial Tributes: Volume 10. Washington, DC: The National Academies Press. doi: 10.17226/10403.
× 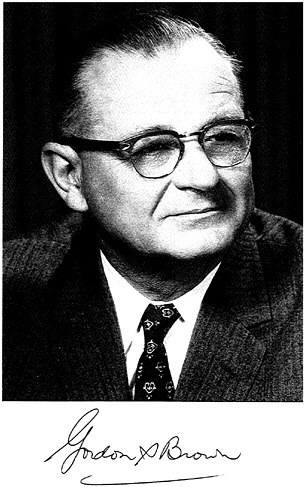 GORDON STANLEY BROWN ranks high among the great contributors to engineering and engineering education in the twentieth century. Born in Australia in 1907, he enrolled as a junior at the Massachusetts Institute of Technology in 1929 after having received diplomas in mechanical, electrical, and civil engineering at what is now the Royal Melbourne Technical College in his native country. He received the S. B. degree in electrical engineering at MIT in 1931 and the Sc. D. degree in 1938, after which he was appointed assistant professor of electrical engineering at MIT. He spent his entire career at the institute, rising through the professorial ranks to full professor in 1946. He was honored in 1973 by his appointment as Institute Professor, a title reserved for only a few of the institute’s most distinguished faculty members.

Dr. Brown’s early academic efforts included the development of a course on servomechanisms, a newly emerging discipline within electrical engineering and a technology that would play an important role in the design of automatic fire-control systems during World War II and beyond. His book Principles of Servomechanisms, coauthored with Donald P. Campbell and published in 1948, was an outgrowth of his classroom subject. It was a seminal piece of work on linear feedback control and a widely used textbook for several years following the war.

Recognizing the future of feedback control and computers and the need for research in these fields, he founded MIT’s Servomechanisms Laboratory in 1940. Through his leadership, several important projects emerged, including research on automatic fire-control systems, the Whirlwind computer project led by Professor Jay Forrester, the automatic control system for the Brookhaven nuclear reactor (the first peacetime nuclear reactor in the world), and the numerically controlled machine-tool project, a revolutionary technology that merged computers and servomechanisms with machine tools and redirected the future of the machine-tool industry. For his laboratory’s work on numerical control, Dr. Brown shared, with William Pease and James McDonough, the 1970 Joseph Marie Jacquard Award of the Numerical Control Society, a professional society that was the direct outgrowth of Servo Lab’s digital machine-tool research.

Dr. Brown will be remembered for his leadership in modernizing post World War II engineering education. When he became head of the electrical engineering department in 1952, major curriculum changes in his department’s programs were already being planned, changes that would recognize new technologies that had emerged from the war effort and would have a major impact on the future of the profession. Dr. Brown immediately turned plans into action. His vision of postwar under-graduate engineering education was that it should emphasize engineering principles and be based on a solid foundation of science and mathematics. Engineering science rather than state-of-the-art engineering practice was his model for post World War II engineering education. He believed students’ education should serve them in good stead for many years after graduation and an electrical science background was a prerequisite. Accordingly, he eliminated outmoded classroom subjects and replaced them with relevant ones; outdated academic laboratories were updated or eliminated if they no longer conformed to his model; and new textbooks were written not only to solidify internal changes but to assist other schools as they, too, began to cope with change.

Dr. Brown’s appointment as dean of engineering in 1959 enabled him to extend his visionary ideas to other engineering

disciplines both within and beyond MIT. The world was now his horizon. To expound his views, he published many papers on education, conferred with his friends in industry, and convened meetings of faculty members from other engineering schools to exchange ideas and to refine his thoughts. During the 1960s he catalyzed engineering-curriculum modernization abroad by establishing a faculty exchange program with the Technical University of Berlin and setting up interactions between MIT faculty members and faculty members at universities in India and Singapore.

Dr. Brown was a strong proponent of interdepartmental, interdisciplinary research that brings together faculty members from several departments and disciplines to work on problems of common interest in a research center. His success in developing several such centers at MIT was recognized to the extent that the concept of interdisciplinary research centers prevails at many research universities throughout the world.

By no means were Dr. Brown’s activities confined to the ivory tower of academia. His outside activities included service to governmental, educational, and industrial organizations. During the war years, he was a consultant to the National Defense Research Council and the War Department. For these services he was awarded the President’s Certificate of Merit and a certificate for Distinguished Service to Naval Ordnance Development. He was also a member of the board of overseers of Dartmouth College’s Thayer School and a director-at-large of the Institute of Electrical and Electronics Engineers (IEEE) and its predecessor organization the Institute of Radio Engineers. Over the years, he was also a member of the boards of directors of several large corporations.

After his election to the National Academy of Engineering in 1965, Dr. Brown served as a member of its Committee on Public Engineering Policy.

During his career, Dr. Brown received many living tributes to his accomplishments. The citations that accompanied his honors and awards were like steppingstones to greatness, as each sought to capture the essence of his achievements. Early recognition came in 1952 when he received the American Society of

Engineering Education’s (ASEE) George Westinghouse Award “for invaluable work in the development of the science of automatic control. ” Then came ASEE’s Benjamin Garver Lamme Award for “his untiring efforts to advance professional education in engineering,” and a similar citation for the Medal in Electrical Engineering Education from the American Institute of Electrical Engineers (AIEE). Accolades continued as the AIEE and the American Academy of Arts and Sciences elected him a fellow, and as he received honorary degrees from Purdue and Southern Methodist universities, Dartmouth College, Stevens Institute of Technology, and the Technical University of Denmark.

Dr. Brown’s style as a leader in research and education was invariant. For each undertaking, he would put together a team of bright young faculty members, staff, and students who were eager to tackle tough new problems. After ensuring that they understood what the goal was, he would give them free rein to do the job. Along the way, he would be their mentor, strong supporter, and constructive critic, but most important, upon completion of the job, he would give them full credit for a job well done. It is little wonder, then, that his coworkers had deep respect and strong admiration for him.

An eternal optimist, Dr. Brown always looked for the one positive reason why something could be done, while ignoring the ninety-nine reasons why it could not. He was impatient with those who resisted change; in his mind those who chose to stand still had already taken two steps backward. His hallmark expression was: “the only steady state is the steady state of change. ”

His penchant for change continued even into retirement. Upon taking up retirement residence in Tucson, Arizona, he and his colleague Professor Forrester worked with the local school system to introduce a new kind of thinking in grades K-12 education. Dr. Brown negotiated a gift of classroom computers and funding to train teaching staff and to carry out experiments in the application of feedback and systems dynamics to physical, natural, and social systems. Building on this initial demonstration, many schools are now pioneering further

advancements in system dynamics as a foundation for precollege education.

Gordon Brown died on August 23, 1996, a week short of his eighty-ninth birthday. He was a man who was deeply devoted to his family, to his wife, Jean, their son and daughter, and their grandchildren. He was their staunch supporter and wise counselor. They and all who knew Dr. Brown and were influenced by him will long remember him.

Next: John D. Caplan »
Memorial Tributes: Volume 10 Get This Book
×