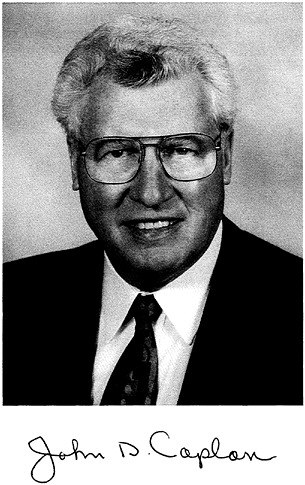 WRITTEN BY JOHN BRUS SUBMITTED BY THE NAE HOME SECRETARY

JOHN D. CAPLAN, the man who spearheaded the automotive industry’s efforts that led to a drastic reduction of automotive hydrocarbon and carbon monoxide emissions during the 1960s and 1970s, died on April 27, 1998, in Royal Oak, Michigan. He was seventy-two.

Caplan was born on March 5, 1926, in Wieser, Idaho. During World War II he was involved in operations in the Pacific. He had just received his B. S. degree in chemical engineering from Oregon State University when he joined General Motors Research Laboratories on July 1, 1949, as a member of the college-graduate-in-training program. In September 1949 he was permanently assigned to the Fuels and Lubricants Department.

When the automobile’s contribution to air pollution was recognized in the early 1950s, Caplan became involved in, and then directed, the technical programs that would define the problem and solve it. In just a few years, he became the leading expert in General Motors and the automotive industry on air pollution, and the principal influence in the formation of General Motors’ policy with regard to the problem.

In addition to his technical capability and judgment, Caplan’s leadership potential was recognized early, and he progressed rapidly through several promotions to become assistant department head in 1955. He completed requirements toward the M. S. de

gree in mechanical engineering, which Wayne State University awarded him in 1955. Later he attended the advanced management program in the Graduate School of Business Administration at Harvard University.

During the mid-to-late 1950s, Caplan directed GM’s program that developed control systems for crankcase blowby gases and evaporative emissions. The General Motors Research Laboratories program discovered that a significant portion of the hydrocarbon emissions from a vehicle came from the crankcase breather, prompting internal venting to eliminate this source of emissions. Positive crankcase ventilation became standard equipment nationwide in 1962 and provided the first major reduction in automotive emissions.

By 1963 Caplan was viewed as an international authority on problems of air pollution from automotive engines and, in addition, General Motors named him to head the research laboratories’ Fuels and Lubricants Department. In this position he guided research programs covering engine combustion, exhaust gas after-treatment and air pollution studies, and fuel studies. Related programs included the evaluation of engine oils, rear axle lubricants, refrigerator compressor oils, synthetic lubricants, transmission fluids, and chassis greases. The work involved research of a fundamental nature, as well as a program of product evaluation.

In this role, he directed the research program that elucidated the mechanism of photochemical smog, established the relationship of urban carbon monoxide concentrations to traffic density, and explained the sources of the various automotive pollutants. As part of this work, he supervised the design and installation of the automotive industry’s first smog chamber, which could duplicate atmospheric photochemical reactions such as those typical of Los Angeles. He guided the development of gas chromatographic techniques and equipment for detecting, separating, and measuring minute concentrations of hydrocarbons in automotive exhaust gases, evaporative emissions, and smog chamber samples. These developments made it possible to conduct parts-per-million and parts-per-billion exhaust gas analysis for the first time.

Caplan had a great influence on the progress of both the automotive and petroleum industries in their joint efforts to optimize engine-fuel and engine-lubricant relationships. Operating in a key liaison position between these two huge industries, he directed an aggressive program to compel improvements in petroleum products used in automotive applications and to find ways to better use those products by hardware design changes. A considerable portion of the progress made in the performance and durability of automotive fuel and lubricant systems during those years must be attributed to Caplan’s outstanding leadership. His direction helped ensure significant reductions in fuel system vapor lock, knock, and bearing and valve train wear problems.

In addition, Caplan negotiated with regulatory agencies of California and the federal government over emission standards and emission measuring procedures and techniques.

All these activities advanced General Motors’ and the auto industry’s cooperative work to progressively control automotive emissions. The collaborative effort began with 1961 model cars and resulted in an 80 percent reduction in hydrocarbons and 65 percent reduction in carbon monoxide by the time 1971 model cars rolled out. Caplan served as the automobile industry’s spokesman on air pollution problems in the United States, Canada, and Great Britain.

Much of his outstanding contribution in the field of automotive emissions was summarized in his 1963 paper “Causes and Control of Automotive Emissions. ” For this, he received Britain’s premier automobile engineering award in 1964, the Crompton-Lanchester Medal from the British Institution of Mechanical Engineers. Caplan also authored many other technical articles for engineering journals, including “Vapor-Locking Tendencies of Fuels—A Practical Approach” and “Smog Chemistry Points the Way to Rational Vehicle Emission Control. ”

In 1967, Caplan was appointed technical director, basic and applied sciences, for General Motors Research Laboratories. Just two years later, he was named executive director. He was interested and knowledgeable in a broad range of fields, which gave him the background necessary to direct a dozen research de

partments ranging from theoretical physics and transportation research to polymers and mechanical engineering. He demonstrated an ability to work well with technical and governmental leaders, a skill that served him well as chairman of the industry’s key emission group, the Vehicle Combustion Products Committee of the Automobile Manufacturers Association.

Caplan served on two advisory committees for the State of California Department of Health: the Automobile Emission Stan-dards Advisory Committee and the Motor Vehicle Pollution Control Board Advisory Committee on Criteria and Testing. He worked with the U. S. Public Health Service Exhaust Gas Research Task Group and National Conference on Air Pollution Steering Committee, and served on the city of Detroit advisory committee on motor fuels and lubricants.

Bill Agnew, a research executive who worked with him for many years, remembers him this way: “John had high respect for excellence and competence. On the other hand, he was a willful man who was intolerant of mediocre performance and aggres

sively attacked incompetence. As such, he was a leader who got things done, but was not universally appreciated. Both at work and in his personal life he wanted things right, and his ability to be right in his own decisions was almost uncanny. He was highly productive and had a stream of accomplishments, many of them carried forward through others, for which he often did not get credit. His editing of reports was sometimes cryptic with margin notes (e. g. , ‘nonsense’) that left the author with no clue as to what was wrong or how to fix it; questioning him would usually get only a smile.

“Away from work John was a true gentleman, a fascinating conversationalist, and a man of many interests. He played an electric organ at home, as an amateur and only for his own pleasure. He liked to socialize, and his sense of humor was subtle, sometimes to the point of being incomprehensible. He often left his sentences incomplete on the incorrect assumption that his audience knew where he was headed.

“John was a family man with great pride and love for his wife and children, and they had great love for him. They took many family vacations around the country, even when his children were grown. He appeared to be a dominant figure in the family, and that seemed to create great strength in the family ties. He was a big man in many respects. ”

Charles Amann, who joined the GM Research Laboratories the same year as Caplan and worked alongside him throughout his career, said, “John took on the field of automotive emissions when it was in its infancy. He had the inquisitive mind that marks a good researcher. Recognizing that there was more to that field than the chemistry in which he had been formally educated, he studied mechanical engineering nights at Wayne State University, earning an M. S. degree. He took a course on internal combustion engines from me, and when the topic of fuels came up, I was uneasy, feeling that he should be up front doing the lecture. Needless to say, he was a top student. John moved into management fairly early in his career, but he never lost his feel for research and was a champion of those he judged to be competent in their fields. ”

unfailingly accepted my invitations to guest lecture before the research engineers and scientists enrolled in my technical writing classes. Because of his insistence upon quality reporting of research projects, he always came in with useful information and advice aimed at helping them achieve this quality.

“He would devote about half of his visit to explaining precisely what he and other GM executives needed and expected to see in their technical reports. John was most emphatic about the need for an informative, rather than a descriptive, abstract. He also stressed the need to separate the details of experimental or test results from the conclusions that flowed from those results.

“John would devote the second half of his visit to answering questions. What impressed me most was his willingness—indeed, his eagerness—to remain in the classroom just as long as questions were being posed—never appearing rushed despite his demanding schedule. His great interest in nurturing quality reporting was not lost on anyone in that classroom. ”

After his retirement in 1987, Caplan continued to evaluate research proposals for the National Science Foundation and the U. S. Department of Commerce. He was a member of the Senior Men’s Club of Birmingham, Michigan, and his condominium association. He enjoyed travel, golf, and working on his computer. His wife, Loris; daughters Barbara Russell, Carole Dolohanty, and Nancy Howell; five grandchildren; and his sister, Christine Medinger, survive him.

Next: Wallace L. Chadwick »
Memorial Tributes: Volume 10 Get This Book
×