Fairness and Effectiveness in Policing: The Evidence (2004)

Visit NAP.edu/10766 to get more information about this book, to buy it in print, or to download it as a free PDF.
Page i Share Cite
Suggested Citation:"Front Matter." National Research Council. 2004. Fairness and Effectiveness in Policing: The Evidence. Washington, DC: The National Academies Press. doi: 10.17226/10419.
×

Committee to Review Research on Police Policy and Practices Wesley Skogan and Kathleen Frydl, editors Committee on Law and Justice Division of Behavioral and Social Sciences and Education

THE NATIONAL ACADEMIES PRESS · 500 Fifth Street, N.W. · Washington, DC 20001 NOTICE: The project that is the subject of this report was approved by the Govern- ing Board of the National Research Council, whose members are drawn from the councils of the National Academy of Sciences, the National Academy of Engineer- ing, and the Institute of Medicine. The members of the committee responsible for the report were chosen for their special competences and with regard for appropri- ate balance. This project was supported by Grant No. 2000-IJ-CX-0014 awarded by the Na- tional Institute of Justice, Office of Justice Programs, U.S. Department of Justice. Points of view in this document are those of the author and do not necessarily represent the official position or policies of the U.S. Department of Justice. Library of Congress Cataloging-in-Publication Data Fairness and effectiveness in policing : the evidence / Wesley Skogan and Kathleen Frydl, editors. p. cm. Includes bibliographical references and index. ISBN 0-309-08433-4 (hc) -- ISBN 0-309-52557-8 (PDF) 1. Police--United States. 2. Police administration--United States. 3. Law enforcement--United States. I. Skogan, Wesley G. II. Frydl, Kathleen. HV8138.F35 2003 363.230973--dc21 2003014400 Additional copies of this report are available from the National Academies Press, 500 Fifth Street, N.W., Lockbox 285, Washington, DC 20055; (800) 624-6242 or (202) 334-3313 (in the Washington metropolitan area); Internet, http:// www.nap.edu. Printed in the United States of America. Copyright 2004 by the National Academy of Sciences. All rights reserved. Suggested citation: National Research Council. (2004). Fairness and Effectiveness in Policing: The Evidence. Committee to Review Research on Police Policy and Practices. Wesley Skogan and Kathleen Frydl, editors. Committee on Law and Jus- tice, Division of Behavioral and Social Sciences and Education. Washington, DC: The National Academies Press.

Preface W hen the Committee to Review Research on Police Policies and Practice began its deliberations, crime rates were plunging, and the role of the police in this startling phenomenon was the sub- ject of vigorous public debate. At the same time, well-known police scan- dals linked to major U.S. police departments--including the Diallo and Louima cases in New York City and the Rampart scandal in Los Angeles-- were shaping the nation's dialogue on policing. By the time the committee concluded its deliberations, terrorists had attacked the nation. The committee attended to its charge to review policing research with these developments in mind. Consistent with the policies of the National Research Council (NRC), the committee confined its attention to social science research. When evidence was lacking concerning critical questions-- such as solutions to the challenges facing local law enforcement agencies in responding to terrorism--the committee includes them in its recommenda- tions for future research. On other subjects, such as the police role in pre- venting crime, there is a substantial body of cumulative research, and the committee makes recommendations for police policy and practice, as well as for research. In its deliberations, the committee returned again and again to the twin issues of fairness and effectiveness in policing. Many of the controversies and challenges facing today's police reflect a perception that these may be to a certain extent antithetical goals, but the committee con- cluded otherwise. These important concepts became the cornerstones of our report. vii

viii PREFACE Many people made generous contributions to the report's success. We thank the authors of the papers presented--Geoffrey Alpert, University of South Carolina; Ian Ayres, Yale Law School; Ron DeLord, Combined Law Enforcement Associations of Texas; Edward A. Flynn, Chief, Arlington County Police Department; Lorie Fridell, Police Executive Research Forum; James Fyfe, John Jay College of Criminal Justice; William King, Bowling Green University; Robert Langworthy, University of Alaska, Anchorage; James Lynch, American University; Gary Miller, Washington University in St. Louis; Joel Miller, Vera Institute of Justice; Craig Uchida, 21st Century Solutions; Carole Willis and Stella Yarrow, Producing and Reducing Crime Unit, Home Office, London, England. The committee would also like to acknowledge the hard work of the consultants for this report--Edward Maguire, George Mason University; Tom Tyler, New York University; and Alexander Weiss, Center for Public Safety. A special thank you goes to Joan Weiss, Executive Director of the Jus- tice Research and Statistics Association (JRSA), for agreeing to publish a thematic volume of the JRSA journal featuring the papers from our work- shop on improving data. This report has been reviewed in draft form by individuals chosen for their diverse perspectives and technical expertise, in accordance with proce- dures approved by the NRC's Report Review Committee. The purpose of this independent review is to provide candid and critical comments that will assist the institution in making its published report as sound as possible and to ensure that the report meets institutional standards for objectivity, evi- dence, and responsiveness to the study charge. The review comments and draft manuscript remain confidential to protect the integrity of the delibera- tive process. We thank the following individuals for their participation in the review of this report: Richard Berk, Department of Statistics, University of Califor- nia, Los Angeles; Brian Forst, Department of Justice, Law, and Society, American University; James J. Fyfe, Commission on Training, New York City Police Department; George L. Kelling, School of Criminal Justice, Rutgers University-Newark; David Kennedy, Kennedy School of Govern- ment, Harvard University; Gil Kerlikowske, Chief of Police, Seattle Police Department; Jerome H. Skolnick, School of Law, New York University; James Wilson, Anderson School, University of California, Los Angeles. Although the reviewers listed above have provided many constructive comments and suggestions, they were not asked to endorse the conclusions or recommendations nor did they see the final draft of the report before its release. The review of this report was overseen by Philip J. Cook, Depart- ment of Public Policy, Duke University, and Alfred Blumstein, H. John Heinz III School of Public Policy and Management, Carnegie Mellon Uni-

PREFACE ix versity. Appointed by the National Research Council, they were responsible for making certain that an independent examination of this report was car- ried out in accordance with institutional procedures and that all review comments were carefully considered. Responsibility for the final content of this report rests entirely with the authoring committee and the institution. Wesley G. Skogan, Chair Committee to Review Research on Police Policy and Practices

Next: Executive Summary »
Fairness and Effectiveness in Policing: The Evidence Get This Book
× 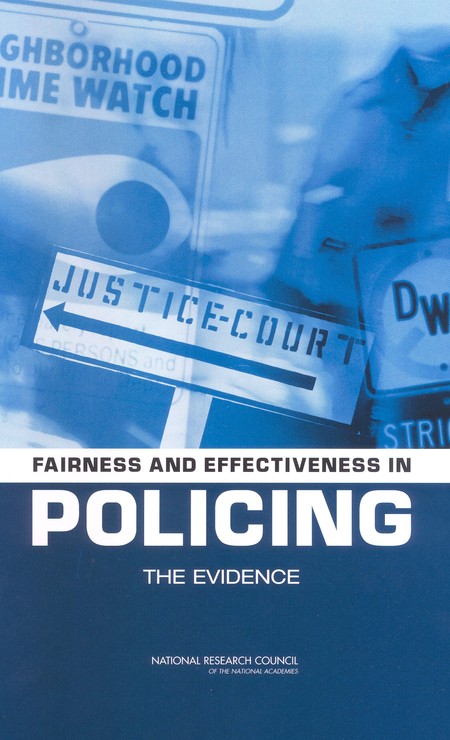 Because police are the most visible face of government power for most citizens, they are expected to deal effectively with crime and disorder and to be impartial. Producing justice through the fair, and restrained use of their authority. The standards by which the public judges police success have become more exacting and challenging.

Fairness and Effectiveness in Policing explores police work in the new century. It replaces myths with research findings and provides recommendations for updated policy and practices to guide it. The book provides answers to the most basic questions: What do police do? It reviews how police work is organized, explores the expanding responsibilities of police, examines the increasing diversity among police employees, and discusses the complex interactions between officers and citizens. It also addresses such topics as community policing, use of force, racial profiling, and evaluates the success of common police techniques, such as focusing on crime “hot spots.” It goes on to look at the issue of legitimacy—how the public gets information about police work, and how police are viewed by different groups, and how police can gain community trust.

Fairness and Effectiveness in Policing will be important to anyone concerned about police work: policy makers, administrators, educators, police supervisors and officers, journalists, and interested citizens.