The Polygraph and Lie Detection (2003)

Chapter:Appendix A: Polygraph Questioning and Techniques

Get This Book
Visit NAP.edu/10766 to get more information about this book, to buy it in print, or to download it as a free PDF.
« Previous: References
Page 253 Share Cite
Suggested Citation:"Appendix A: Polygraph Questioning and Techniques." National Research Council. 2003. The Polygraph and Lie Detection. Washington, DC: The National Academies Press. doi: 10.17226/10420.
×

All polygraph testing techniques normally begin with a pretest interview. The examinee and examiner discuss the test, test procedure, examinee’s medical history, and details of the test issues. The examiner also observes the behavior of the examinee and, in test formats that allow for discretion in question design, may gather information to be used in choosing comparison questions for the test. Depending on the complexity of the case, examiner-examinee interactions, and testing technique, the pretest interview may last from 30 minutes to 2 hours or longer (Krapohl and Sturm, 2001).

The relevant-irrelevant test format was the first widely used polygraph testing format and was long the dominant format. The format was originally used in criminal testing. Currently, it is also used in multiple-issue screening applications, for example, at the U.S. National Security Agency.

Relevant-irrelevant polygraph tests are not normally standardized for question selection or for interpretation. Examiners typically interpret the test results globally by inspecting the charts to see whether or not there is a pattern of stronger responses to relevant questions. The lack of standard procedures for administration and scoring makes the relevant-irrelevant test unsuitable for scientific evaluation. It is not possible to support general conclusions about its accuracy because the procedure can vary uncontrollably across examiners and examinations. Polygraph researchers generally consider the test outmoded. For example, Raskin and Honts (2002:5) conclude that the relevant-irrelevant test “does not satisfy the basic requirements of a psychophysiological test and should not be used.”

ever stolen anything?” In probable-lie comparison question tests, the instructions are designed to induce innocent people to answer in the negative, even though most are lying. Innocent examinees are expected to experience concern about these answers that shows in their physiological responses. In directed-lie tests, examinees are instructed to respond negatively and untruthfully to comparison questions (e.g., “During the first 20 years of your life, did you ever tell even one lie?”). In both forms of test, the expectation is that innocent examinees will react more strongly to the comparison questions, and guilty examinees will react more strongly to relevant questions.

The zone comparison test, which was developed by Backster (1963), is named for the three “zones” or blocks of time during the test: the relevant questions (called the red zone), the probable-lie comparison questions (the green zone), and other questions (the black zone). Black zone questions are included to uncover examinee concerns about an issue outside of the scope of the red and green zones, such as involvement in another crime. Each zone is presumed to be threatening to someone; however, depending on the examinee’s mental set, it is anticipated that one particular zone is more threatening than are the other two (information from Donald Krapohl, U.S. Department of Defense Polygraph Institute, private communication, October 5, 2001). This was the first comparison question test to incorporate a numerical scoring system. It used a seven-point

rating scale applied to each physiological measure for each relevant question on the test.

The Utah probable-lie test, developed by Raskin and colleagues (Raskin and Honts, 2002) is constructed with question modules, typically consisting of irrelevant, probable-lie comparison, and relevant questions. Examiners are instructed to conduct the test, including the pretest interview, in the low-key manner of a psychological interview rather than in the confrontational manner of an interrogation that is common in some other questioning formats: “It is critical that the examiner’s demeanor and behavior be professional and objective” (Raskin and Honts, 2002:18). Attention is paid to going over the questions with the examinee carefully during the pretest period. Charts are scored on a numerical scale that is a modification of the one developed for the zone comparison test. Computer interpretation programs have also been developed for this test.

The Utah directed-lie test was developed to address some problems that were associated with the Utah probable-lie test, including the perceived need for highly skilled examiners, problems of standardizing the questions, and the possibility that examinees may misunderstand the purpose of the probable-lie questions and therefore fail to respond as the theory presumes. The test is administered and scored like the probable-lie version. The comparison questions are like those in the Utah probable-lie test, except that the examinee is told that anyone who gives a negative answer would be lying and is then asked to give a negative answer.

Test of Espionage and Sabotage

The Test of Espionage and Sabotage is a directed-lie test that was developed at the U.S. Department of Defense Polygraph Institute and is used by some U.S. government agencies, including the U.S. Department of Energy, for security screening. A repeated series of relevant and di-rected-lie comparison questions is used to address multiple issues (espionage, sabotage, unauthorized foreign contacts, and unauthorized release of information). This test is scored by the conventional seven-position scoring system used in the Utah tests, with the total score being the sum across the three examination parameters for each question on all charts. Numerical thresholds are predefined for judging whether or not a test indicates a significant response that might indicate deception or is incon-

clusive. A judgment of a significant response is normally followed by further questioning and possibly further testing with single-issue format polygraph tests.

The stimulation test, sometimes called the stim test or acquaintance test, is used by examiners in some test formats either during the pretest or between charts. Examinees are presented with a question set of very similar items and directed to lie about one. The examinee may be asked to pick one of several playing cards (card test) or to pick a number between three and seven (numbers test), and then to deny having picked each of the cards or numbers while connected to the polygraph machine. The main purpose of the procedure is to induce or strengthen in examinees the expectation that the polygraph can accurately determine the truthfulness of their answers.

Concealed information tests (more often called guilty knowledge or concealed knowledge tests) present examinees with sets of very similar items, much in the manner of stimulation tests, except that the similar items include one true and several (usually, four) false details of some aspect of an incident under investigation that has not been publicized, so that the true answer would be known only to the investigators and to those present at the incident. In a burglary, examinees might be asked about several possible points of entry into the house, one of which the burglar actually used. (For more detail about question construction and administration of concealed information tests, see Nakayama [2002].) When an examinee is asked whether he or she used each of these routes, the answer is expected to be negative regardless of the examinee’s innocence or guilt. Guilty examinees are expected to reveal their concealed knowledge by responding more strongly to the true item than to the others.

Concealed information tests are applicable only under restricted conditions: when there is a specific incident, activity, or thing that can be the subject of questioning and when there are several relevant details that are known only to investigators and those present at the incident. Thus, these tests are not applicable in typical screening situations in which the only possible relevant questions concern generic events, such as unspecified acts of espionage that may or may not have occurred.

The peak-of-tension test is similar in format to concealed information tests, but is distinct because questions are asked in an easily recognized order (e.g., “Was the amount of stolen money $1,000? $2,000? $3,000?” etc.). A guilty examinee is expected to show a pattern of responsiveness that increases as the correct alternative approaches in the question sequence and decreases when it has passed. Stimulation tests often have this format. In a known-solution peak-of-tension test, the examiner knows which alternative is the one truly connected to the incident and evaluates the examinee’s pattern of responses for evidence of involvement in the incident. It is also possible to use the peak-of-tension test in a searching mode when the examiner does not know which answer is connected to the event but wants to use the test for help in an investigation. It is assumed that the pattern of a guilty person’s autonomic responses will reveal the correct answer.

Krapohl, D.J., and S.H. Sturm 2001 Terminology Reference for the Science of Psychophysiological Detection of Deception, updated from 1997 book by the American Polygraph Association.

Next: Appendix B: Use of Polygraph Screening in the U.S. Department of Energy and Other Federal Agencies »
The Polygraph and Lie Detection Get This Book
× 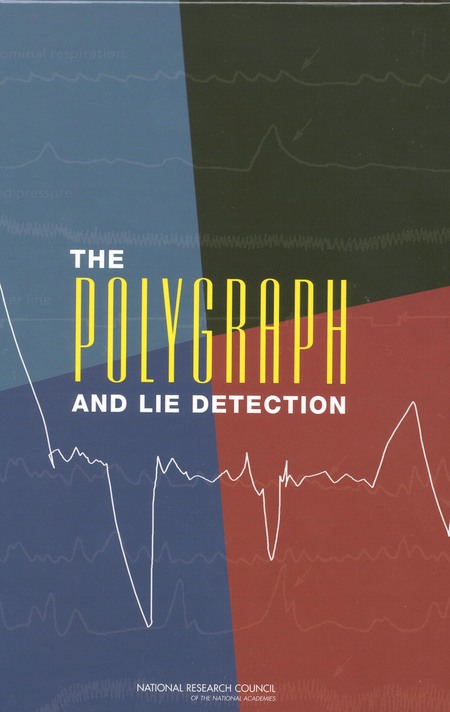 The polygraph, often portrayed as a magic mind-reading machine, is still controversial among experts, who continue heated debates about its validity as a lie-detecting device. As the nation takes a fresh look at ways to enhance its security, can the polygraph be considered a useful tool?

The Polygraph and Lie Detection puts the polygraph itself to the test, reviewing and analyzing data about its use in criminal investigation, employment screening, and counter-intelligence.

The book looks at:

The book addresses the difficulties of measuring polygraph accuracy, the usefulness of the technique for aiding interrogation and for deterrence, and includes potential alternatives—such as voice-stress analysis and brain measurement techniques.