Assessment of the Practicality of Pulsed Fast Neutron Analysis for Aviation Security: Summary (2002)

Get This Book
Visit NAP.edu/10766 to get more information about this book, to buy it in print, or to download it as a free PDF.
Page i Share Cite
Suggested Citation:"Front Matter." National Research Council. 2002. Assessment of the Practicality of Pulsed Fast Neutron Analysis for Aviation Security: Summary. Washington, DC: The National Academies Press. doi: 10.17226/10428.
×

Available in limited supply, with appropriate approvals, from:

The Institute of Medicine was established in 1970 by the National Academy of Sciences to secure the services of eminent members of appropriate professions in the examination of policy matters pertaining to the health of the public. The Institute acts under the responsibility given to the National Academy of Sciences by its congressional charter to be an advisor to the federal government and, upon its own initiative, to identify issues of medical care, research, and education. Dr. Harvey V. Fineberg is president of the Institute of Medicine.

CHARLES HACH, Program Officer (until May 2000)

Assessment of the Practicality of Pulsed Fast Neutron Analysis for Aviation Security sprang from a 1993 request by the Federal Aviation Administration (FAA) for the National Research Council (NRC) to assist in assessing its explosives-detection program. The resulting Committee on Commercial Aviation Security (CCAS) produced two interim reports on the subject.1 In the second report, the committee recommended that the FAA should not pursue accelerator-based nuclear detection technologies for the primary screening of checked baggage, nor should it fund any new, large, accelerator-based hardware development projects.

In 1997, the FAA funded Science Applications International Corporation (SAIC) with nearly $1 million to demonstrate the feasibility of using pulsed fast neutron analysis (PFNA) to search for small quantities of explosives in cargo containers. In conjunction with this pursuit, the FAA asked the NRC to independently evaluate the potential of PFNA. This evaluation would take into account both the earlier recommendations from the CCAS and technical developments since its previous reports.

The FAA has continued to pursue accelerator-based nuclear detection technologies that detect explosives and drugs by measuring the elemental composition of materials. These technologies exploit the high nitrogen and oxygen content found in most explosives and the high chlorine content and high carbon-to-oxygen ratio in certain drugs.2 PFNA uses a collimated, nanosecond-pulse-width beam of monoenergetic fast neutrons to excite the nuclei of common elements in bulk materials.3 PFNA identifies explosives and drugs by the specific material- and energy-dependent absorption and scattering cross sections of neutrons as they interact with the nuclei of different elements. Inelastic interaction of fast neutrons with nuclei generates gamma rays. From the characteristic gamma-ray spectrum of a material, PFNA can determine its carbon, nitrogen, and oxygen content. The relative amounts of these elements can be used to discriminate explosive from non-explosive materials.

PFNA can generate three-dimensional, characteristic gamma-ray maps and is able to detect explosives and drugs hidden in vehicles and in large cargo containers. However, it also has a number of practical limitations, including large size and weight, the need for radiation shielding, difficulty in penetrating hydrogenous materials, and regulatory and safety issues associated with nuclear-based technologies.4

In many ways, the activities undertaken and the technology assessed by the Panel on Assessment of the Practicality of Pulsed Fast Neutron Analysis for Aviation Security are similar to those of the Panel on the Assessment of Pulsed Fast Neutron Transmission Spectroscopy.5 Both technologies had strong congressional backing and both have similar advantages and disadvantages.

The specific statement of task as agreed upon by both the panel and the sponsor was to evaluate the potential of PFNA for screening cargo and passenger baggage for explosives and drugs, compared with the potential of current and projected x-ray–based computed tomography (CT) systems. The panel was charged to—

It is important to note what this statement of task did not encompass. Specifically, the panel did not address cargo threats in ports of entry other than airports. Further, the panel used the threat classes as they were presented by the FAA and did not evaluate their efficacy. The panel also restricted its focus to current implementations of the technology and thus did not evaluate applications that exist outside the arena of cargo screening, nor did it conduct an exhaustive review of concepts or technical papers. Within the existing implementations, the only working prototype has been developed by Ancore Corporation. For this reason, the bulk of the analysis centers on the Ancore technology.

The panel's expectation is that this report will be read and used as a reference on the subject. For this reason, it has endeavored to be as comprehensive and detailed as possible in both the analysis and the recommendations.

Although the reviewers listed above have provided many constructive comments and suggestions, they were not asked to endorse the conclusions or recommendations, nor did they see the final draft of the report before its release. The review of this report was overseen by Frank Stillinger, Princeton University. Appointed by the National Research Council, he was responsible for making certain that an independent examination of this report was carried out in accordance with institutional procedures and that all review comments were carefully considered. Responsibility for the final content of this report rests entirely with the authoring panel and the institution.

Next: Executive Summary »
Assessment of the Practicality of Pulsed Fast Neutron Analysis for Aviation Security: Summary Get This Book
× 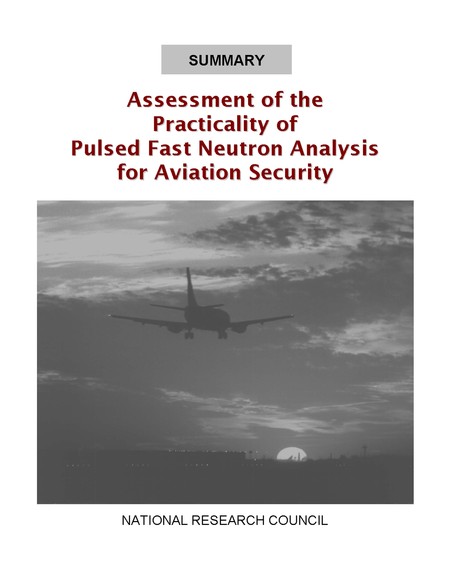 A major goal of the Federal Aviation Administration (FAA), and now the Transportation Security Administration (TSA), is the development of technologies for detecting explosives and illegal drugs in freight cargo and passenger luggage. One such technology is pulsed fast neutron analysis (PFNA). This technology is based on detection of signature radiation (gamma rays) induced in material scanned by a beam of neutrons. While PFNA may have the potential to meet TSA goals, it has many limitations. Because of these issues, the government asked the National Research Council to evaluate the potential of PFNA for airport use and compare it with current and future x-ray technology. The results of this survey are presented in "Assessment of the Practicality of Pulsed Fast Neutron Analysis for Aviation Security.”

A broad range of detection methods and test results are covered in this report. Tests conducted as of October 2000 showed that the PFNA system was unable to meet the stringent federal aviation requirements for explosive detection in air cargo containers. PFNA systems did, however, demonstrate some superior characteristics compared to existing x-ray systems in detecting explosives in cargo containers, though neither system performed entirely satisfactorily. Substantial improvements are needed in the PFNA detection algorithms to allow it to meet aviation detection standards for explosives in cargo and passenger baggage.

The PFNA system currently requires a long scan time (an average of 90 minutes per container in the prototype testing in October 2000), needs considerable radiation shielding, is significantly larger than current x-ray systems, and has high implementation costs. These factors are likely to limit installation at airports, even if the detection capability is improved. Nevertheless, because PFNA has the best potential of any known technology for detecting explosives in cargo and luggage, this book discusses how continued research to improve detection capabilities and system design can best be applied for the airport environment.