Visit NAP.edu/10766 to get more information about this book, to buy it in print, or to download it as a free PDF.
« Previous: 3 Trends Affecting the Base Level Automation Program
Page 39 Share Cite
Suggested Citation:"Appendix A: Air Force Planning Leading to Phase IV." National Research Council. 1981. Modernizing the U.S. Air Force Base Level Automation System. Washington, DC: The National Academies Press. doi: 10.17226/10450.
×

Appendix A AIR FORCE PLANNING LEADING TO PHASE IV The Air Force launched several independent studies, beginning in the early 1970's, to determine its future base level data automation requirements. These included STADOG (Study of the Automation of the Logistic System at Base Level), SADPR-85 (Support of Air Force Automatic Data Processing Requirements through the 1980's), and BASE-TOP (Base Automated Systems for Total Operations Program). In commissioning these studies, the Air Force was concerned with the growing obsolescence of the computers it used to support administrative operations on 115 air bases worldwide. The computers included the Univac U1050-II, a second-generation computer used by the Air Force since 1965, and the Burroughs B3500, in use since 1969. The Air Force was concerned that as the computers became older, their failure rates would increase and adversely affect Air Force operational effectiveness. Further, the government-owned components of the Univac computers could not be replaced by the supplier. Even where parts were replaceable, replacement prolonged the computers' original capabilities without taking advantage of rapid advances in data processing technology. STALOG The STALOG study, published in mid-1973, sought to determine how best to satisfy data automation requirements for logistics at each air base at minimum cost. The study analyzed five hardware alternatives for an integrated system concept that entailed large-scale development of functional software. The study recommended replacing the Univac and Burroughs computers with a single computer system at each air base as the most economical course, since it consolidated two separate computer systems into one. SADPR-85 The SADPR-85 study was initiated in October 1973. The Assistant Secretary of the Air Force (Financial Management) stressed the need to determine total ADP support at base level, beyond that examined in 39

40 STALOG. The two major alternatives considered in this study were: (1) an on-base computer system at each installation, and (2) regionalization. The study found that regionalization was the more economical plan, but also the one with the greater technical risk. In May 1974, the SADPR-85 steering committee at Air Force Headquarters adopted the on-base computer system strategy. BASE-TOP Meanwhile, the Office of the Secretary of Defense restricted future funding of STADOG development in December 1973 to the then current level until the Air Force developed a comprehensive plan to satisfy total base level ADP requirements. In response, the Air Force established BASE-TOP to prepare this plan and manage the acquisition of new base level systems to satisfy all requirements, including STALOG. During the fall of 1974, Air Force Headquarters recognized the risk of simultaneously implementing major changes to hardware, software, and information systems. As an alternative' a modular, incremental development plan was begun. This approach, however, raised significant hardware integration problems. Thus, this plan required significant amounts of new ADP equipment for short-term improvements before the aging Univac and Burroughs equipments were replaced. In addition, the plan posed serious technical problems In interfacing a second-generation computer with more modern equipment. DIRECTION FROM THE OFFICE OF THE SECRETARY OF DEFENSE In its October 1975 internal budget review, the Department of Defense (DOD) determined that the evolutionary approach being developed under BASE-TOP/STALOG raised significant problems related to hardware acquisition, software development, and system implementation. The department felt that these problems were not solvable prior to the start of fiscal year 1977. DOD also noted that the Air Force had not fully complied with the December 1973 directive to submit a plan satisfying total base level ADP requirements. As a result, the department limited fiscal year 1977 funds for computer hardware to the level of the previous year. The department also directed the Air Force to submit a plan satisfying all base operating functions through competitive selection of computer systems from a single manufacturer with modular, add-on capability to accommodate different workloads and mobility requirements. REDIRECTION OF THE BASE-TOP/STALOG PROGRAMS In December 1975, the Air Force logistics community reevaluated the automation requirements of the STALOG program, with the result that a large portion of the logistic automation requirements were removed. Functional requirements were also reviewed and significantly reduced.

41 INITIATION OF HE PHASE IV PROGRAM In the spring of 1976, the Air Force's Director of Data Automation won acceptance of the idea of discontinuing the BASE-TOP/STALOG programs in favor of a base-level program for capital replacement of the Univac and Burroughs equipment. This separated the development of application systems from acquisition of hardware to replace existing equipment. Thus was begun the planning for the capital replacement program known as Phase IV. A serious concern was the ability of the Univac equipment to support supply requirements until Phase IV could be implemented. An ADP acquisition team was established to determine how to implement Phase IV in the shortest time at the lowest risk. The team concluded that the "system contractor" approach was best. That approach involved: Contracting the transition of high-risk software to two competing contractors. Conducting a full range of testing, including a Qualification Operational Test and Evaluation conducted by the Air Force Test and Evaluation Center. Awarding a production contract to a single vendor. Implementing the computer systems in a phased conversion, replacing the Univac U1050 first and then the Burroughs B3500. REVIEW OF THE PHASE IV PROD The Phase IV Program underwent an extensive series of reviews both within the Air Force and in the Office of the Secretary of Defense. Other reviews were conducted by the Office of Management and Budget (OMB), the Office of Federal Procurement Policy, the Senate Committee on Appropriations, and the House Committees on Appropriations and on Government Operations. In March 1979, the chairman of the House Committee on Government Operations requested a General Accounting Office (GAO) review of the Phase IV program. On October 10-11, 1979, congressional hearings on the Phase IV program were held, with testimony by the GAO, the Air Force, the Department of Defense, and the General Services Administration (GSA). On October 26, 1979, the GAO released its formal report, recommending cancellation of the Phase IV program. On November 28, 1979, the Secretary of the Air Force replied to the GAO report, indicating that the recommendation was too drastic. On November 2, 1979, the General Services Administration suspended the Delegation of Procurement Authority for Phase IV pending its review of the program. Extensive discussions were held between Air Force and GSA officials, and senior members of the GSA staff visited several bases to review Air Force requirements and to assess the effect of canceling the Phase IV program. On March 28, 1980, the Secretary of the Air Force notified the Chairman of the House Committee on Government Operations that, after

42 coordination with the GSA, the Phase IV program had been redirected to resolve the concerns raised by GAO and the House Committee on Government Operations. GSA reinstated the Delegation of Procurement Authority for Phase IV on April 3, 1980. Contracts were awarded on December 1, 1980, to the Burroughs Corporation and to Sperry Univac for the initial software transition portion of the Phase IV program. Software transition and testing activity is under way as of mid-1981. The Air Force plans to select the final Phase IV vendor and to begin installation of new computers in February 1983.

Next: Appendix B: Glossary »
Modernizing the U.S. Air Force Base Level Automation System Get This Book
× 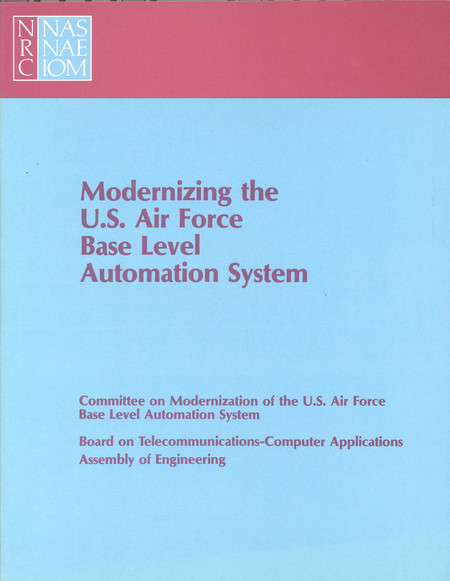