Get This Book
Visit NAP.edu/10766 to get more information about this book, to buy it in print, or to download it as a free PDF.
« Previous: 4. Research Opportunities in PTTI
Page 39 Share Cite
Suggested Citation:"5. Defense Needs for PTTI." National Research Council. 2002. An Assessment of Precision Time and Time Interval Science and Technology. Washington, DC: The National Academies Press. doi: 10.17226/10541.
×

Over the last two decades, U.S. warfighting capabilities have undergone a revolution enabled by a number of essential technologies. For example, advances in microelectronics have been applied to communications, signal processing, and computational power. Electro-optics technology has found application in sensors for detectors and imaging, laser range finders, target designators, inertial navigation systems, and communications. A less obvious but equally essential technology is PTTI. One need only consider the precision targeting resulting from GPS, enabled by PTTI, to appreciate its role. Much of the success of the U.S. armed forces in the last 15 years has depended on the synchronization and dissemination of precise time. The Navy, through NRL and USNO, has been the major force within DOD in turning laboratory demonstrations into operationally useful PTTI devices. Like many technologies, much of PTTI’s usefulness was foreseen only dimly, if at all.

THE ROLE OF PTTI IN MILITARY OPERATIONS

There are many particular examples of essential military operations that depend on PTTI and would benefit from improvements in clock technology. The committee again emphasizes that such improvements go beyond drift rate to considerations such as power, ruggedness, size, and other similar factors. The following areas are offered as a representative sample, with speculation on how improvements in PTTI would impact each.

Atomic clocks are flown on GPS satellites to maintain the phase accuracy of the transmitted GPS signal, which ensures an accurate one-way range measurement for the user. These clocks also serve as flywheels to maintain the synchronization of the GPS system if uploads of time signals from the GPS ground station to the satellite constellation are temporarily unavailable.

Recent improvements to GPS atomic clocks demonstrate the power of PTTI for the warfighter. Rubidium clocks flown on GPS Block IIR have much better stability than those flown on GPS

Block II/IIA. The ranging error with the improved clocks is almost halved. These ranging accuracy improvements allow a proportional improvement in positioning and time outputs from a GPS receiver.

Further improvements in stability and ruggedness of the atomic clocks flown on GPS satellites could do the following:

Advances in PTTI such as more accurate time dissemination and synchronization would provide better overall time coordination between distributed assets. For the warfighter, this could mean

GPS Antijamming and the Two-Satellite Solution

If enemy jamming is present, direct acquisition of GPS signal is necessary. Direct acquisition requires a search for the start of the code signal. If the user has accurate knowledge of time from his local clock, the time required for this search can be reduced. This can be critical in battle situations— for example, in a guided weapon that may have less than a minute to lock up, as in the current weapon system design for a joint direct-attack munition (JDAM). To maintain 100-microsecond acquisition time uncertainty over 12 hours requires a clock with stability of 2 × 10−9. Current receiver clocks, with typical stability of 1 × 10−6, drift this far in 100 seconds. While other solutions to this problem are possible, clocks better in all aspects would allow trade-offs when the system is being designed.

In other situations—for example, under jungle canopies or in urban canyons and mountainous terrain or in case of satellite failure—fewer than the normal four GPS satellites are in view. If the user has accurate time from his local clock and independent knowledge of altitude, a position fix can be obtained with only two satellites. Ranging accuracy goes approximately as (drift rate × time since update). If the last time update was 2 hours earlier and the equivalent ranging accuracy requirement was 200 meters, drift rates of less than about 10−10 would be required in a low-power, rugged, lightweight device. A solution to the two-satellite problem would be particularly useful to Marines and Army personnel.

Both GPS antijamming and the two-satellite problem could be addressed by better local clocks. Decreasing the size, weight, power requirements, and cost of devices to achieve higher-accuracy handheld clocks could affordably accomplish two things:

Internetted warfare (or, in Navy terms, network-centric operations) are military operations that exploit state-of-the-art information and networking technology to integrate widely dispersed human decision makers, situational and targeting sensors, and forces and weapons into a highly adaptive, comprehensive system to achieve unprecedented mission effectiveness.1 It involves the concept of electronically connecting all of the platforms in an area of operations, so that all assets can communicate digitally with all others in the area and even with out-of-area assets. Instead of individual platforms (ships, aircraft, etc.) being the centerpiece of Navy forces, each platform would be a node within a large architecture. These nodes, if effectively connected, could bring their warfighting assets or warfighting support to bear in a very short period of time, thus enhancing the warfighting capability of the naval force. Network-centric warfare seeks to allow naval forces such as ships, aircraft, ground stations, and satellites to communicate effectively with each other so that Navy forces can do the following:

Network-centric warfare is more than classical communications. It includes systems such as the Navy’s cooperative engagement capability (CEC). CEC enables battle-group ships and aircraft to integrate sensor and weapons system data into a single integrated architecture. With CEC, any ship can shoot at an enemy aircraft based on tactical displays developed on other ships. The CEC system depends, among other things, on the speed of communications that link the computers together and the accuracy of the grid systems for tracking Navy ships and enemy aircraft.

Basically, anything that makes communications faster and more effective will contribute to network-centric warfare. Multiple communications circuits will need reliability, security, and speed of synchronizing. An accurate grid system for tracking the positions of both friendly forces and adversaries is also essential to this network approach to warfighting. All these things are dependent upon PTTI and can be improved by PTTI advances. Improving the accuracy, precision, and stability of shipboard timing by reducing the cost and size of high-performance clocks and improving their ruggedness would, in turn, improve the following:

Military operations place stricter demands upon communication systems than civilian uses. Higher rates of data transmission are required, while maintaining high-quality service (low error rate and high reliability). Transmissions must be robust in the presence of jamming and secure, with a low probability of interception. Spread-spectrum approaches are typically used for secure communications. (Some commercial communications systems also rely on spread spectrum.) Several techniques are used to spread the bandwidth, including patterns of phase modulation and hopping among a set of frequencies. Typically, the specific patterns of the signal are defined by pseudo-random codes. In an attempt to provide improved security, encrypted codes are being employed that require an acquisition sequence similar to GPS. Accurate knowledge of time can speed up or enable acquisition.

Spread-spectrum and frequency-hopping techniques are central to communication systems such as Link-16, strategic applications of the MILSTAR satellite communications system, and the Navy’s Situational Beacon and Reply (SABER) system for battlefield and battle-group situational awareness. Time synchronization and precise frequency control are of fundamental importance to system function for all of these techniques. Further challenges arise from the necessity to maintain such systems in demanding tactical environments ranging from combatants on the ground to aircraft in stressed dynamical conditions. Precise, independent knowledge of time reduces user dependence on extracting time from transmitted signals. This is directly related to time required to acquire a spread-spectrum signal so that the user can begin communicating.

Figure 5.1 summarizes the current unclassified formal Navy requirements for PTTI, as determined from a list compiled by N70T. These requirements fall along a spectrum of required accuracy and come from a wide variety of the Navy’s programs; a notable number are high-accuracy requirements. As military utility has become more apparent, these requirements tend to become more stringent in all aspects (not just frequency and time stability). PTTI has been, is, and will continue to be a critical enabler in warfare. Advances in this technology will surely lead to more effective and productive armed forces.

New Paradigms for the Navy and DOD

The committee can envision relatively new and increasingly important drivers for PTTI advances, based on the changing nature of conflicts, including the following: 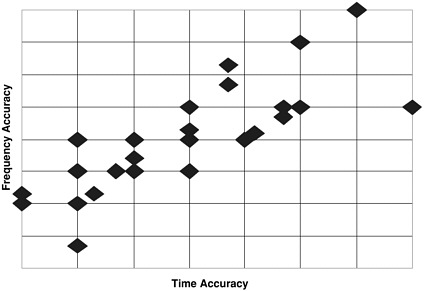 FIGURE 5.1 Current formal Navy requirements for PTTI, as compiled for the committee by N70T. Not included are the classified programs, some of which presumably are pushing the state of the art in PTTI. Forty-three programs are shown (some points overlap).

Next: 6. Findings and Recommendations »
An Assessment of Precision Time and Time Interval Science and Technology Get This Book
× 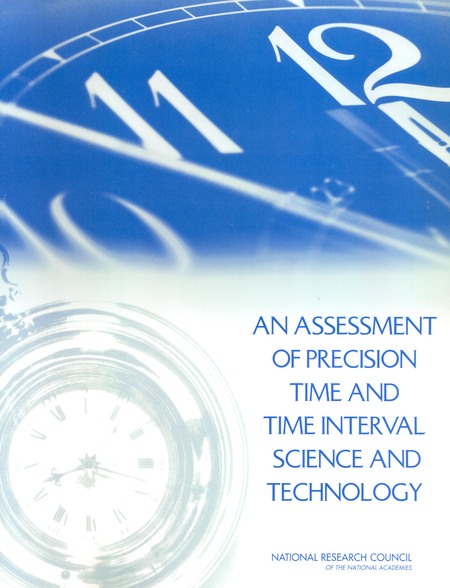 Knowledge of time is essential to precise knowledge of location, and for this reason the Navy, with its need to navigate on the high seas, has historically played an important role in the development and application of advanced time realization and dissemination technologies. Discoveries coming from basic research funded by the Office of Naval Research (ONR) lie at the heart of today's highest performance atomic clocks, Naval Research Laboratory (NRL) expertise played a role in developing the space-qualified atomic clocks that enable the Global Positioning System (GPS), and the U.S. Naval Observatory (USNO) maintains and disseminates the standard of time for all of the Department of Defense (DOD). The Navy has made major investments in most aspects of precision time and time interval (PTTI) science and technology, although specific PTTI-related research has also been funded by the Defense Advanced Research Projects Agency (DARPA) and non-DOD agencies such as the National Science Foundation (NSF), the National Aeronautics and Space Administration (NASA), and the Department of Commerce. Navy funding, largely through ONR, has a history of being an early enabler of key new developments. Judicious funding decisions by the Navy—particularly by ONR program officers—have underpinned most of the major advances in PTTI science and technology (S&T) in the last 50 years.

PTTI is important to modern naval needs, and indeed to all the armed Services, for use in both navigation and communications. Precise time synchronization is needed to efficiently determine the start of a code sequence in secure communications, to perform navigation, and to locate the position of signal emitters. Precise frequency control is required in communications for spectrum utilization and frequency-hopped spread-spectrum techniques. There are many examples of essential military operations that depend on PTTI and could benefit from improvements in PTTI technology. These include:

This report summarizes that reductions in the size, weight, and power requirements and increases in the ruggedness of PTTI devices without sacrificing performance would put more accurate and precise timekeeping in the hands of the warrior, improving capabilities in all of the above operations.