Get This Book
Visit NAP.edu/10766 to get more information about this book, to buy it in print, or to download it as a free PDF.
« Previous: Appendix B: Invited Speakers
Page 53 Share Cite
Suggested Citation:"Appendix C: Biographical Sketches of Committee Members." National Research Council. 2001. Theoretical Foundations for Decision Making in Engineering Design. Washington, DC: The National Academies Press. doi: 10.17226/10566.
×

Robert J.Eagan, chair, is vice president of the Energy, Information and Infrastructure Surety Division at Sandia National Laboratories. He joined Sandia in 1971 after receiving a Ph.D. in ceramic engineering from the University of Illinois. He currently serves on the NRC’s Board of Manufacturing and Engineering Design and on the Knowledge Management Committee of the Industrial Research Institute. He is a distinguished life member of the American Ceramics Society and its past president. He also is past president of the Federation of Materials Societies and a former member of the National Materials Advisory Board.

Beth E.Allen has been the Carlson Professor of Economics at the University of Minnesota since 1992. From 1978 to 1992 she was a faculty member at the University of Pennsylvania. She has expertise in game theory, utility theory, the economics of information, general equilibrium, probability, and mathematics. She earned her B.A. degree in chemistry and economics from Cornell University (1974) and her M.A. in mathematics (1976) and Ph.D. in economics (1978) from the University of California, Berkeley. She is a member of the editorial board for the Journal of Mathematical Economics and has served as associate editor for Econometrica and International Economic Review. Currently she is president of the Midwest Economics Association; she has served on and chaired major committees of the American Economic Association and the Econometric Society. She has published some 70 articles on rational expectations and information as a differentiated commodity, randomized pricing strategies for firms, the structure of aggregate demand and equilibria in smooth economies, information in cooperative game theory, technological diffusion, expected utility, social choice, and engineering design theory, She was elected a fellow of the Econometric Society in 1983.

Corbett D.Caudill is GE Aircraft Engines’ vice president and general manager for engineering. He heads an engineering organization of 4,000 persons to conduct research and design products for all engine programs for governmental, commercial, and industrial customers. He has been a design engineer on components across the total engine from turbine, compressors, and rotating structures to controls. From a systems perspective he provided technical leadership in qualifying the F101-GE engine for the B-1B aircraft and the GE90 for the Boeing 777 aircraft. He received a B.S. degree in mechanical engineering (1967) from the University of Cincinnati and an M.B.A. (1972) from Xavier University. He is an associate fellow of the American Institute of Aeronautics and Astronautics, the University Executive for GE at the University of Cincinnati, and an advisory board member for the School of Engineering, University of Cincinnati.

Ronald A.Howard is professor of engineering in the Department of Engineering-Economic Systems/Operation Research, Stanford University, where he has taught since 1965. He received his Sc.D. in electrical engineering (1958) from the Massachusetts Institute of Technology. He has published many articles on probabilistic modeling and decision analysis. His three books on dynamic programming and Markov processes serve as major textbooks and references for courses and research in these fields. As a consultant he is a founder and director of Strategic Decisions Group. In 1986 he received the Frank P.Ramsey Medal “for distinguished contributions in decision analysis” from the Operational Research Society (UK). He is a member of the National Academy of Engineering.

J.Stuart Hunter is a professor emeritus of the School of Engineering and Applied Science, Princeton University. His expertise covers industrial applications of statistics and experimental designs. He is the co-author of two books: Introduction to Engineering Statistics (1965) and Statistics for Experimenters (1978). He is the founder of Technometrics (1959). He has received numerous awards and honors: the Shewhart Medal (1970), the Youden Award (1977), the Ellis Ott Award (1978), the W. Edwards Deming Medal (1986), the S.S.Wilks Medal, U.S. Army (1987), the Outstanding Statistician of the Year Award (1987), and the Braumbaugh Award for best paper in the Journal of Quality Technology (twice). He is active as a consultant to industry and government and is a frequent lecturer.

Christopher L.Magee is the executive director of program and advanced engineering at Ford Motor Company. His global engineering organization of about 7,000 persons conducts various aspects of Ford’s product and advanced engineering programs. His areas of expertise include vehicle design, system engineering, and application of computer-aided engineering and computer-aided design. He received his Ph.D. in metallurgy and materials science (1966) from Carnegie Institute of Technology (now Carnegie Mellon University). He has been affiliated with the board of SAE, the editorial board of the International Journal of Vehicle Design, the Board of the American Society of Body Engineers, and the NRC’s Advisory Board on Automotive Materials. He is a member of the National Academy of Engineering. He has received many awards, including the Alfred Nobel Award in 1972.

Simon Ostrach is Wilbert J.Austin Distinguished Professor of Engineering in the Department of Mechanical and Aerospace Engineering, Case Western Reserve University, where he has taught since 1960. He is also the director of the National Center for Microgravity Research on Fluids and Combustion. His expertise covers mechanical engineering and applied mathematics. He received his Ph.D. in applied mathematics at Brown University (1950). He serves on the editorial boards of such journals as Manufacturing Review, Letters in Applied and Engineering Sciences, Mechanics, and Heat Transfer. He has received many awards such as the AIAA Space Processing Award (1994), ASME Heat Transfer Division 50th Anniversary Award (1988), and the ASME-AIChE Max Jacob Memorial Award (1983). He has published some 133 articles and papers in scientific and engineering journals and Volumes. He is home secretary of the National Academy of Engineering and a member of the Board of Governors of the National Research Council.

William B.Rouse is the chief executive officer of Enterprise Support Systems, a firm providing software solutions, consulting services, and training in the areas of strategic planning, market and product planning, and organizational change. Prior to his current position he was a professor at Tufts University, the University of Illinois, and Georgia Institute of Technology. He received his Ph.D. degree in engineering (1972) from the Massachusetts Institute of Technology. An expert in human decision making, human-computer interaction, and design of information systems, he is the author of numerous articles and has authored many books, including most recently Don’t Jump to Solutions (Jossey-Bass, 1998), Start Where You Are (Jossey-Bass, 1996), and Best Laid Plans (Prentice-Hall, 1994). He is co-editor of the Handbook of Systems Engineering and Management (Wiley, 1999). Among many advisory roles, he has served as chair of the Committee on Human Factors of the National Research Council and is currently a member of the U.S. Air Force Scientific Advisory Board. He is a member of the National Academy of Engineering.

Next: Appendix D: Committee Usage »
Theoretical Foundations for Decision Making in Engineering Design Get This Book
× 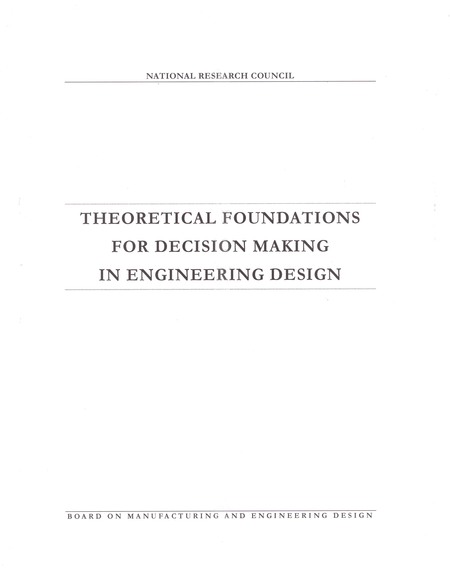