Terrorism: Perspectives from the Behavioral and Social Sciences (2002)

Get This Book
Visit NAP.edu/10766 to get more information about this book, to buy it in print, or to download it as a free PDF.
Page i Share Cite
Suggested Citation:"Front Matter." National Research Council. 2002. Terrorism: Perspectives from the Behavioral and Social Sciences. Washington, DC: The National Academies Press. doi: 10.17226/10570.
×

Perspectives from the Behavioral and Social Sciences

Committee on Science and Technology for Countering Terrorism

Center for Social and Economic Studies

Department of Political Science and the Technology and Development Program, Massachusetts Institute of Technology

Departments of Anthropology and Demography (emeritus), University of California, Berkeley

Department of Psychology, University of Maryland

Department of Sociology, University of California

To stress the salience and urgency ofthenational situation as dictated by contemporary terrorism and to underscore the need for behavioral and social science understandings of that situation are to pronounce the self-evident. Terrorism, already recognized by some as the looming form of international conflict in the late twentieth century, moved dramatically to center stage on September 11, 2001, and promises to occupy national attention for decades. It is also evident that while the scientific, technological, and military aspects are essential parts of understanding and containing terrorism, every aspect of that phenomenon yields human and social dimensions. This report has the objective of bringing behavioral and social science knowledge and understandings to bear on terrorism and the responses to it.

As part of its work the committee spun off eight panels on specialized aspects of terrorism, some of which are preparing their own reports. The group responsible for this report is one of these panels. Two of our panel members served as members of the main committee, and many parts of our report have been incorporated into the master report. However, the report con-

tained in these pages was prepared independently of the work of the larger committee.

In this report we focus first on the nature and determinants of terrorism itself and, second, on domestic responses to terrorist activity. Under the first heading we take up nettlesome definitional issues, and then—moving from remote to proximate determinants—consider the international, demographic, economic, political, and cultural determinants of terrorism, as well as its motivational and organizational aspects.

Under the second heading we bring knowledge about disaster behavior to bear on the topics of preparedness, warning, and short-term responses to terrorist attacks, calling attention to likely longer-term political, economic, and cultural processes of recovery. At the end we present our best sense of the priorities for behavioral and social science research on many aspects of terrorism.

The panel included scholars from the disciplines of anthropology, demography, economics, history, political science, psychology, and sociology. Its special areas of expertise include the history of Muslim societies, the contemporary Middle East, the politics of the state, revolutionary social movements, deterrence and game theory, the cognitive structure of beliefs, disaster studies, the politics of diplomacy and peacekeeping, and social change. The panel met twice in Washington, DC, on January 13-14 and February 24, 2002. Between the meetings the panel members undertook drafting assignments and exchanged materials and ideas by email. We pooled our general knowledge of relevant topics, read what we deemed as the best in the exploding literature on terrorism, and made use of the face-to-face meetings to synthesize as best we could the extremely diverse strands of knowledge at our disposal. The report that follows represents a solid consensus on the part of the panel.

The panel would like to thank the National Research Council staff who supported our work and facilitated the achievement of this ambitious goal: Faith Mitchell, study director; Janet Garton, program associate; and Benjamin Woolsey, project assistant. Erik Smith worked as a consultant with Eugene Hammel on new demographic analysis. Lewis Branscomb, Richard Klausner, and other members of the main committee made helpful comments about the draft and provided other intellectual contributions. The panel is grateful as well to the National Academies for their financial support.

This report has been reviewed in draft form by individuals chosen for their diverse perspectives and technical expertise, in accordance with procedures approved by the Report Review Committee of the National Research Council. The purpose of this independent review is to provide candid and critical comments that will assist the institution in making its published report as sound as possible and to ensure that the report meets institutional standards for objectivity, evidence, and responsiveness to the study charge. The review comments and draft manuscript remain confidential to protect the integrity of the deliberative process.

Although the reviewers listed above have provided many constructive comments and suggestions, they were not asked to endorse the conclusions or recommendations nor did they see the final draft of the report before its release. The review of this report was overseen by Robert Frosch, Belfer Center for Science and International Affairs, Harvard University, and Charles Tilly, Departments of Sociology and Political Science, Columbia University. Appointed by the National Research Council, they were responsible for making certain that an independent examination of this report was carried out in accordance with institutional procedures and that all review comments were carefully considered. Responsibility for the final content of this report rests entirely with the authoring committee and the institution.

Next: Executive Summary »
Terrorism: Perspectives from the Behavioral and Social Sciences Get This Book
× 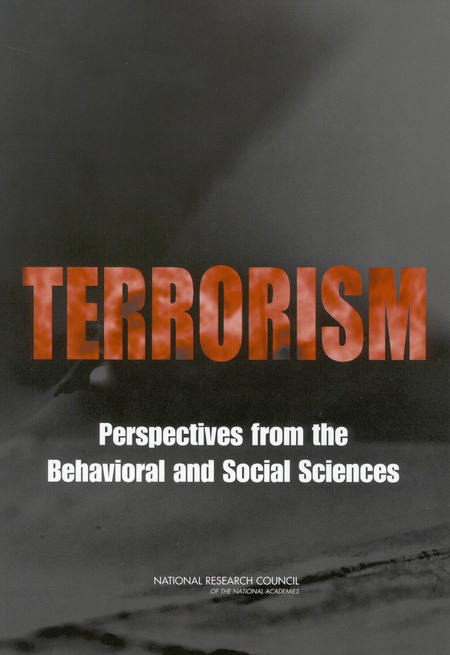 The events and aftermath of September 11, 2001, profoundly changed the course of history of the nation. They also brought the phenomenon known as terrorism to the forefront of the nation's consciousness. As it became thus focused, the limits of scientific understanding of terrorism and the capacity to develop policies to deal with it became even more evident. The objective of this report is to bring behavioral and social science perspectives to bear on the nature, determinants, and domestic responses to contemporary terrorism as a way of making theoretical and practical knowledge more adequate to the task. It also identifies areas of research priorities for the behavioral and social sciences.