Implications of Emerging Micro- and Nanotechnologies (2002)

Get This Book
Visit NAP.edu/10766 to get more information about this book, to buy it in print, or to download it as a free PDF.
« Previous: 1. Introduction
Page 30 Share Cite
Suggested Citation:"2. Expectations for Future Micro- and Nanotechnologies." National Research Council. 2002. Implications of Emerging Micro- and Nanotechnologies. Washington, DC: The National Academies Press. doi: 10.17226/10582.
×

Visions for the future of nanotechnology and for its impact on technology in general are many. In this chapter, the committee discusses three: the International Technology Roadmap for Semiconductors (ITRS), the MEMS Industry Group 2001 Annual Report, and the National Nanotechnology Initiative (NNI).

In 1992, the Semiconductor Industry Association (SIA) published a roadmap that charted the future of the industry by providing consensus predictions of future requirements and suggested solutions to anticipated problems with a 15-year time horizon. The industry roadmapping has evolved into a continuous process, with major reissues every 2 years. The most recent full update, the 2001 ITRS1 includes input from semiconductor manufacturers worldwide and covers a 16-year period, divided into the near term (2001-2007) and the long term (2008-2016). Past SIA roadmaps have proven to be reliable predictors of future integrated circuit performance. 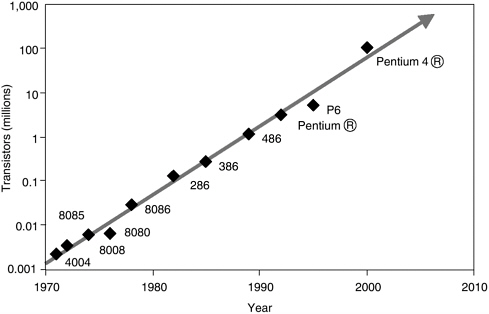 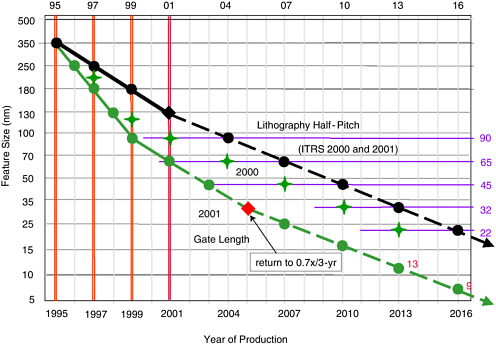 affects the minimum feature size (transistor gate length) required. Scaling has been employed to increase nearly all aspects of performance, including speed, power consumption per operation, and reliability. At the same time, the cost of the highest performance chips has remained approximately constant, and the cost per function has gone down dramatically, by over nine orders of magnitude.

The 2001 ITRS consists of target values for representative characteristics of circuits that are predicted to be in production each year from now until 2016. Examples include dynamic random-access memory (DRAM) half-pitch, multiprocessor unit gate length, and junction depth. The manufacturability of each characteristic quantity is evaluated and assigned to one of three categories: manufacturable, currently being optimized; manufacturable, solutions are known; and, manufacturing solutions are not known. A point in the future where several quantities in the roadmap fall into the “manufacturing solutions are not known” category signals trouble and is called a red-brick wall. For example, a brick wall currently exists in 2007, at the end of the near-term period, indicating that research breakthroughs will be required to maintain the predicted schedule. Both new materials and advanced metal oxide semiconductor field effect transistor (MOSFET) structures may be required to break through this red brick wall. The longer-term challenge is to develop a manufacturable non-classical MOSFET structure to extend the technology to and beyond the end of the roadmap.

No clear path is seen for extending the technology beyond the roadmap horizon of 2016. Indeed, a transition to an alternative technology may be needed before 2016. The 2001 ITRS notes as follows:2

The horizon of the Roadmap challenges the most optimistic projections for continued scaling of CMOS (for example, MOSFET channel lengths of roughly 9 nm)...[and] it is difficult for] most people in the semiconductor industry to imagine how we could continue to afford the historic trends in process equipment and factory costs for another 15 years!

A new technology will be needed, because, beyond the numerous technological and economic difficulties arising with sub-10-nanometer minimum dimensions, MOSFET integrated circuit (IC) technologies cannot shrink indefinitely. Ultimately, the discrete atomic nature of matter limits the shrinkage. Before that, however, the quantum phenomena characteristic of nanotechnology become important, and scaling laws that have not taken such phenomena into account will prove problematical. For example, quantum mechanical tunneling of charge

carriers becomes significant at 10 nanometers and dominates below 3 nanometers. In addition, at a few nanometers, about 50 percent of all atoms in a particle are surface atoms, so that electrical properties are no longer determined by solid-state bulk phenomena.

On the other hand, the same nanoscale phenomena offer the opportunity to develop whole new classes of devices based on the principles of quantum physics, which may propel integrated circuits toward and beyond the end of the current roadmap. FlashRAM, now widely used to store data in digital cameras and MP3 music players, uses quantum-mechanical tunneling of electrons through ~10-nanometer-thick dielectric layers to charge a memory storage element. The ITRS (2001) and the European Commission Technology Roadmap for Nanoelectronics (2000)3 discuss a number of candidates for replacing classical CMOS. However, it may be that systems based on these new principles function in a manner significantly different from current computing systems and are more suited to alternative architectures. There is no established roadmap to the development of these technologies, even though one may speculate on their functionality. A possible path is illustrated in Figure 2-3. 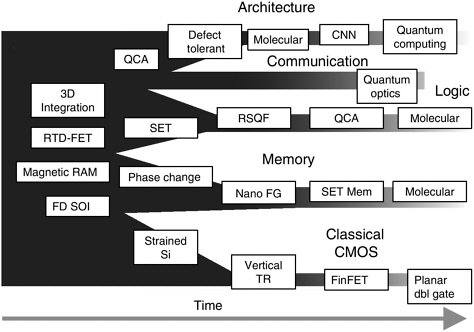 The MEMS Industry Group is a nonprofit trade association of 22 member companies, established, in part, to “enable the exchange of non-proprietary information among members” and “provide reliable industry data that furthers the development of technology.” Its annual report for 2001 discusses the key drivers and challenges expected by the industry over the next 20 years.4 The committee briefly summarizes the findings here.

Starting with materials and fabrication approaches developed for the microelectronics industry, multiple miniaturized electronic and mechanical subsystems are integrated into a single microsystem. MEMS devices find applications in diverse industries because of their ability to perform complex functions and their

relatively low cost, small size, low weight, high reliability, and good performance. The MEMS industry was estimated in 2000 to be between $2 billion and $4 billion in size (contrasted with about $180 billion for the IC industry) with 1.6 MEMS devices per person in use in the United States in 2001 and a compound annual rate of growth of 45 percent. MEMS production in the United States is currently concentrated on sensors and telecommunications, but there is a strong trend toward diversification.

The MEMS Industry Group’s 2001 Annual Report foresees tremendous growth for the industry over the next 20 years. It discusses the expected roadmap for the industry in terms of the critical drivers and challenges expected, with driver defined as a force that “causes significant reactions in MEMS technology or commercialization.” The advent of wireless networks and communications are a major driver for the introduction of MEMS into information technology. Drivers for the application of MEMS in health care are our aging population and our strong concern for a high quality of life.

The report also discusses technology challenges—that is, the known barriers to future progress in MEMS development and applications. First, MEMS fabrication equipment manufacturers are seen as being too few in number and too limited in diversity and quality. Similar problems are seen in packaging equipment for MEMS. Second, there is a need for standard (as opposed to custom) foundry services to facilitate testing and characterization by MEMS producers. Third, a library of reusable circuit designs needs to be developed to provide interfaces with MEMS. Fourth, packaging methods specific to MEMS need to be developed, and their effect on performance needs to be quantified. Other near-and intermediate-term issues concern communication and the need for a suitably trained workforce, e.g., MEMS-trained circuit designers. Over the longer term, there will be technological challenges relating to the stacking, assembly, lithography, and processing of three-dimensional geometries and the greater integration of electronics with MEMS.

In September 1999, the President’s Interagency Working Group on Nanoscience, Engineering and Technology (IWGN) issued a report arguing that we were poised at a point of great scientific and technological opportunity. Science had gained a much greater appreciation of the degree to which controlling the structure of matter on the nanoscale could determine the macroscopic properties of materials. Further, major advances had been made in our ability to manipulate matter at the atomic and molecular levels. The working group report recommended the initiation of a national program in nanotechnology, which it defined as “the creation and utilization of materials, devices, and systems through the control of matter on the nanometer-length scale, that is, at the level of atoms, molecules and supramolecular structures.” Nanotechnology, it was said, “could impact the production of virtually every human-made object . . . and lead to the invention of objects yet to be imagined.”5

While nanotechnology is in its infancy and substantial changes in direction and emphasis can be expected in the research portfolio of the NNI over the next decade, an inspection of the current NNI Grand Challenges gives an overview of the initial intent. There are nine NNI Grand Challenges in all, which are briefly described below.

range of lengths will be used. Explore the novel optical properties available with photonic bandgap structures.

Most national programs cover science broadly; some have been designed to support the development of specific industries. The training of future scientists in what is perceived to be a key technology of the 21st century is generally an important part of each national program. The programs also stress the development of new manufacturing methods to derive the full benefit from nanoscience. A great deal of effort is going into collaborative efforts in this multidisciplinary field. National and international collaborations take the form of agreements between groups in the same discipline, between groups in different disciplines, or between groups in academe, industrial laboratories, and national laboratories. A variety of networks have been formed to bring groups together to share expertise and specialized equipment. 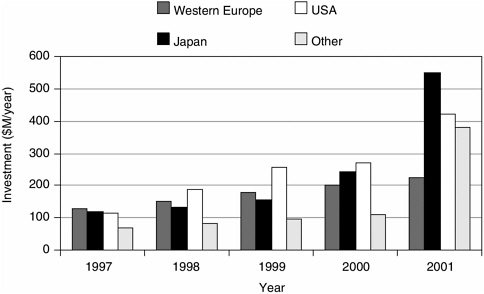 FIGURE 2-4 Worldwide government R&D spending on nanotechnology. Note that Western Europe includes the European Union and Switzerland. Countries included in the “Other” category are Australia, Canada, China, the former Soviet Union, Korea, Singapore, Taiwan, and additional countries. Finally, the entry for Japan in 2001 includes a $140 million addition to the budget that may include some programs outside the definition of nanotechnology used by the NNI. SOURCE: Data from M.C. Roco, 2001. International strategy for nanotechnology research and development. Journal of Nanoparticle Research 3(5-6): 353–360.

Next: 3. Major Areas of Opportunity »
Implications of Emerging Micro- and Nanotechnologies Get This Book
× 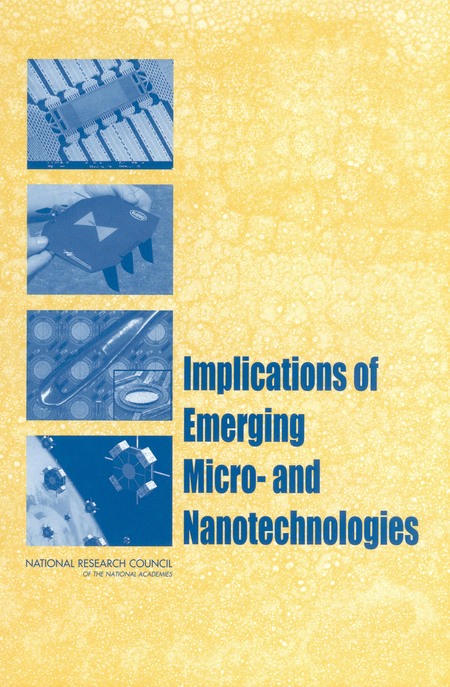 Expansion of micro-technology applications and rapid advances in nano-science have generated considerable interest by the Air Force in how these developments will affect the nature of warfare and how it could exploit these trends. The report notes four principal themes emerging from the current technological trends: increased information capability, miniaturization, new materials, and increased functionality. Recommendations about Air Force roles in micro- and nanotechnology research are presented including those areas in which the Air Force should take the lead. The report also provides a number of technical and policy findings and recommendations that are critical for effective development of the Air Force’s micro- and nano-science and technology program