Visit NAP.edu/10766 to get more information about this book, to buy it in print, or to download it as a free PDF.
Page i Share Cite
Suggested Citation:"Front Matter." Institute of Medicine. 2003. Immunization Safety Review: Vaccinations and Sudden Unexpected Death in Infancy. Washington, DC: The National Academies Press. doi: 10.17226/10649.
×

THE NATIONAL ACADEMIES PRESS 500 Fifth Street, N.W. Washington, DC 20001 NOTICE: The project that is the subject of this report was approved by the Governing Board of the National Research Council, whose members are drawn from the councils of the National Academy of Sciences, the National Academy of Engineering, and the Insti- tute of Medicine. The members of the committee responsible for the report were chosen for their special competences and with regard for appropriate balance. Support for this project was provided by the Centers for Disease Control and Prevention and the National Institute of Allergy and Infectious Diseases of the National Institutes of Health as part of a National Institutes of Health Task Order No.74. The views presented in this report are those of the Institute of Medicine Immunization Safety Review Committee and are not necessarily those of the funding agencies. International Standard Book Number 0-309-08886-0 (Book) International Standard Book Number 0-309-52317-6 (PDF) Additional copies of this report are available from the National Academies Press, 500 Fifth Street, N.W., Lockbox 285, Washington, DC 20055; (800) 624-6242 or (202) 334- 3313 (in the Washington metropolitan area); Internet, http://www.nap.edu. For more information about the Institute of Medicine, visit the IOM home page at: www.iom.edu. Copyright 2003 by the National Academy of Sciences. All rights reserved. Printed in the United States of America. The serpent has been a symbol of long life, healing, and knowledge among almost all cultures and religions since the beginning of recorded history. The serpent adopted as a logotype by the Institute of Medicine is a relief carving from ancient Greece, now held by the Staatliche Museen in Berlin.

Reviewers This report has been reviewed in draft form by individuals chosen for their diverse perspectives and technical expertise, in accordance with procedures ap- proved by the NRC's Report Review Committee. The purpose of this indepen- dent review is to provide candid and critical comments that will assist the institu- tion in making its published report as sound as possible and to ensure that the report meets institutional standards for objectivity, evidence, and responsiveness to the study charge. The review comments and draft manuscript remain confiden- tial to protect the integrity of the deliberative process. We wish to thank the following individuals for their review of this report: Ann Bostrom, Ph.D., Georgia Institute of Technology Aurore Cote, M.D., Montreal Children's Hospital Linda D. Cowan, Ph.D., University of Oklahoma Enid Gilbert-Barness, M.D., Tampa General Hospital Samuel L. Katz, M.D., Duke University Medical Center Hannah Kinney, M.D., Children's Hospital, Boston Linda Linville, M.S., R.N., Texas Department of Health Martin Ward Platt, M.D., F.R.C.P, Royal Victoria Infirmary Richard Rheingans, Ph.D., Emory University Frank M. Sullivan, B.Sc.(Hons), Consultant Toxicologist Brian ,1. Ward, M.D., Montreal General Hospital Although the reviewers listed above have provided many constructive com- ments and suggestions, they were not asked to endorse the conclusions or recom- . . via

vit! REVIEWERS mendations nor did they see the final draft of the report before its release. The review of this report was overseen by Robert Lawrence, M.D., The Johns Hopkins University. Appointed by the National Research Council and Institute of Medicine, he was responsible for making certain that an independent examina- tion of this report was carried out in accordance with institutional procedures and that all review comments were carefully considered. Responsibility for the final content of this report rests entirely with the authoring committee and the institu- tion.

Foreword Vaccines are among the greatest public health accomplishments of the past century. In recent years, however, a number of concerns have been raised about both the safety of and the need for certain immunizations. Indeed, immunization safety is a contentious area of public health policy, with discourse around it having become increasingly polarized and exceedingly difficult. The numerous controversies and allegations surrounding immunization safety signify an erosion of public trust in those responsible for vaccine research, development, licensure, schedules, and policy making. Because vaccines are so widely used and be- cause state laws require that children be vaccinated to enter daycare and school, in part to protect others immunization safety concerns should be vigorously pursued in order to restore this trust. It is in this context that the Institute of Medicine (IOM) was approached more than a year ago by the Centers for Disease Control and Prevention and the National Institutes of Health to convene an independent committee that could provide timely and objective assistance to the Department of Health and Human Services in reviewing emerging immunization safety concerns. The IOM was chartered by the National Academy of Sciences in 1970 to serve as an adviser to the federal government on issues affecting the public's health, as well as to act independently in identifying important issues of medical care, research, and education. The IOM thus brings to this mission three decades of experience in conducting independent analyses of significant public health policy issues. In particular, as described in more detail in this report, the IOM has a long history of involvement in vaccine safety. The IOM published its first major vaccine safety report in 1977, followed by a subsequent report in 1988; both Six

x FOREWORD focused on the safety of polio vaccines. Two subsequent major reports, published in 1991 and 1994, examined the adverse events of childhood vaccines. Since then, the IOM has conducted several smaller studies and workshops focused on various vaccine safety topics. These studies were all well received by both the public and policy makers, and previous IOM committees on vaccine safety issues have been viewed as objective and credible. Given the sensitive nature of the present immunization safety review study, the IOM felt it was especially critical to establish strict criteria for committee membership. These criteria prevented participation by anyone with financial ties to vaccine manufacturers or their parent companies, previous service on major vaccine advisory committees, or prior expert testimony or publications on issues of vaccine safety. The rationale for imposing these stringent criteria was twofold. First, given growing public concern about vaccine safety and the public scrutiny surrounding this committee's work, it was important to establish standards that would pre- clude any real or perceived conflict of interest or bias on the part of the committee members. While the committee members all share a belief in the benefits of vaccines to the public health, none of them has any vested interest in any of the vaccine safety issues that will come before them. Second, the IOM wanted to ensure consistency in the committee membership and to avoid having members recuse themselves from the deliberations because they had participated in the development or evaluation of a vaccine under study. Thus, the IOM has convened a distinguished panel of 15 members who possess significant breadth and depth of expertise in a number of fields, including pediatrics, neurology, immunology, internal medicine, infectious diseases, genet- ics, epidemiology, biostatistics, risk perception and communication, decision analysis, public health, nursing, and ethics. The committee members were chosen because they are leading authorities in their respective fields, are well respected by their colleagues, and have no conflicts of interest. This committee brought a fresh perspective to these critically important issues and approached its charge with impartiality and scientific rigor. The IOM does not propose the use of the criteria it has laid out above in selecting members for federal vaccine advisory committees. The IOM committee was convened for a very different purpose from the usual federal vaccine advi- sory committees and, as such, required different standards. As with all reports from the IOM, the committee' s work was reviewed by an independent panel of experts. The purpose of the review process is to enhance the clarity, cogency, and accuracy of the final report and to ensure that the authors and the IOM are creditably represented by the report published in their names. The report review process is overseen by the National Research Council's (NRC) Report Review Committee (RRC), comprised of approximately 30 members of the National Academy of Sciences, National Academy of Engineering, and IOM. The IOM, in conjunction with the RRC, appoints a panel of reviewers with a

FOREWORD Xt diverse set of perspectives on key issues considered in the report. Unlike the selection criteria for committee membership (discussed above), many reviewers will have strong opinions and biases about the report topic. The composition of the review panel is not disclosed to the committee until after the report is ap- proved for release. While the committee must consider and evaluate all com- ments from reviewers, it is not obligated to change its report in response to the reviewers' comments. The committee must, however, justify its responses to the reviewers' comments to the satisfaction of the RRC's review monitor and the IOM's review coordinator. A report may not be released to the sponsors or the public, nor may its findings be disclosed, until after the review process has been satisfactorily completed and all authors have approved the revised draft. This report represents the unanimous conclusions and recommendations of that dedicated committee whose members deliberated a critical health issue. The report's conclusions and recommendations should be of value to all concerned about these important matters. Harvey V. Fineberg President, Institute of Medicine

Next: Executive Summary »
Immunization Safety Review: Vaccinations and Sudden Unexpected Death in Infancy Get This Book
× 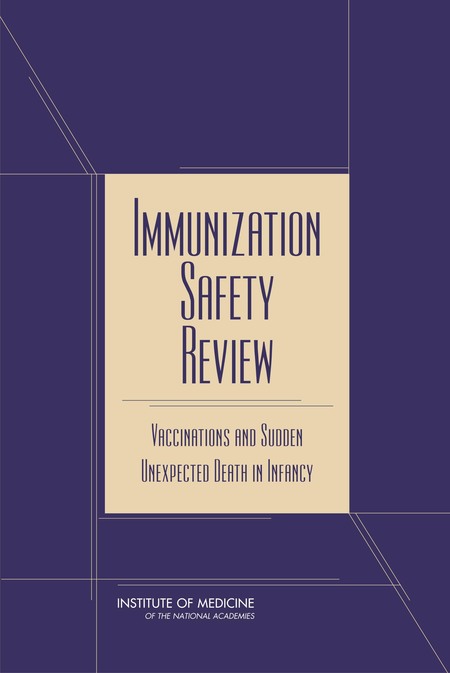 With current recommendations calling for infants to receive multiple doses of vaccines during their first year of life and with sudden infant death syndrome (SIDS) the most frequent cause of death during the postneonatal period, it is important to respond to concerns that vaccination might play a role in sudden unexpected infant death.

The committee reviewed epidemiologic evidence focusing on three outcomes: SIDS, all SUDI (sudden unexpected death in infancy), and neonatal death (infant death, whether sudden or not, during the first 4 weeks of life). Based on this review, the committee concluded that the evidence favors rejection of a causal relationship between some vaccines and SIDS; and that the evidence is inadequate to accept or reject a causal relationship between other vaccines and SIDS, SUDI, or neonatal death. The evidence regarding biological mechanisms is essentially theoretical, reflecting in large measure the lack of knowledge concerning the pathogenesis of SIDS.