Chapter:Appendix A: Nuclear Materials Production in the DOE Complex

Get This Book
Visit NAP.edu/10766 to get more information about this book, to buy it in print, or to download it as a free PDF.
« Previous: References
Page 95 Share Cite
Suggested Citation:"Appendix A: Nuclear Materials Production in the DOE Complex." National Research Council. 2003. Improving the Scientific Basis for Managing DOE's Excess Nuclear Materials and Spent Nuclear Fuel. Washington, DC: The National Academies Press. doi: 10.17226/10684.
×

Appendix A Nuclear Materials Production in the DOE Complex

Nuclear weapons production in the United States was a complex series of integrated activities at multiple sites across the country. To provide a context for the nuclear materials and spent fuel challenges and research opportunities described in this report, these activities can be grouped into seven major processes:

Uranium production began with mining and milling to extract uranium ore from the Earth and chemically processing it to prepare uranium concentrate (U3O8), sometimes called uranium octaoxide or yellowcake. Because natural uranium consists mainly of the mass 238 isotope (U-238) and only about 0.7 percent of the fissile isotope, U-235, the next step was to concentrate (enrich) the U-235 content in a portion of the uranium. The process began with natural uranium and resulted in enriched uranium and depleted uranium. The first U.S.

Uranium enrichment has resulted in the accumulation of about 700,000 metric tons of depleted uranium hexafluoride (DUF6), most of which was stored in large carbon steel cylinders at the enrichment facilities. The DUF6 comprises the largest quantity of separated material in the DOE complex. Research opportunities that might lead to improved options for management, reuse, or disposal of this material are discussed in Chapter 6.

The focus of the Department of Energy’s (DOE’s) nuclear materials production activities was to produce plutonium for nuclear weapons.1 Enriched uranium served as fuel in production reactors, and excess neutrons from the nuclear chain reaction bred Pu-239 and other isotopes in “targets” made of U-238. Fuel and target fabrication consisted of the foundry and machine shop operations required to convert uranium feed material, principally metal, into fuel and target elements. Some later production reactors used separate fuel and target elements, while early production reactors used the same elements for both fuel and targets. Uranium ingots were extruded, rolled, drawn, swaged, straightened, and outgassed to produce rods and plates. The rods were machined, ground, cleaned, coated, clad, and assembled into finished fuel.

Reactor fuel and target fabrication was initially carried out by private contractors and at the Hanford, Washington, and the Savannah River, South Carolina, production reactor sites. Within a decade, government-owned plants in Fernald, Ohio, and Weldon Spring, Missouri, took over part of this mission, supplying the fuel manufacturing plants at Hanford and the Savannah River Site (SRS). At SRS, fuel rods were made by extrusion of an alloy of aluminum and HEU to form thin-walled, aluminum-clad fuel tubes.

Reactor operations created essentially all the nuclear materials used in the DOE complex. Except for a few special cases, such as research reactor fuel, the highly radioactive spent fuel and targets were reprocessed to recover plutonium, uranium, and other isotopes and to separate waste materials. However, when the United States stopped its plutonium production in 1992, some spent fuels, including targets, were left unreprocessed. Currently, DOE’s inventory of spent nuclear fuels (SNF) amounts to about 2,500 metric tons of heavy metal (U and Pu), most of which are stored at Hanford, SRS, Oak Ridge, and the Idaho National Engineering and Environmental Laboratory (INEEL). Chapter 4 describes research needs and opportunities for improving DOE’s ability to manage and dispose of its SNF in view of their potential radiation and security risks.

Chemical separation of spent fuel and target elements produced large volumes of highly radioactive waste (high-level waste), and large quantities of low-level radioactive wastewater, solid low-level waste, and mixed low-level waste. Dealing with these waste materials is a central part of the DOE Office of Environmental Management’s cleanup mission. Previous National Academies’ reports have provided advice to the Environmental Management Science Program on research to improve management of these wastes. Separated nuclear materials from reprocessing that are dealt with in this report include plutonium (Chapter 3), cesium and strontium (Chapter 5), and special isotopes (Chapter 7).

Assembly is the process of joining together separately manufactured components and major parts into complete, functional, and certified nuclear warheads for delivery to the Department of Defense. Maintenance includes the modification and upkeep of a nuclear weapon during its life cycle. Dismantlement involves the reduction of retired warheads to a nonfunctional state and the disposition of their component parts. The dismantlement process yields parts containing special nuclear materials, high explosives, hazardous materials, and other components with hazardous and nonhazardous properties. Some parts are returned to the facility where they were originally produced. Other parts are maintained in storage (e.g., plutonium pits) or are dispositioned on site. With respect to the excess plutonium, a major step toward disposition will be conversion to mixed oxide fuel for commercial power reactors at a new facility to be built at SRS (see Chapter 3).

Next: Appendix B: Biographical Sketches of Committee Members »
Improving the Scientific Basis for Managing DOE's Excess Nuclear Materials and Spent Nuclear Fuel Get This Book
× 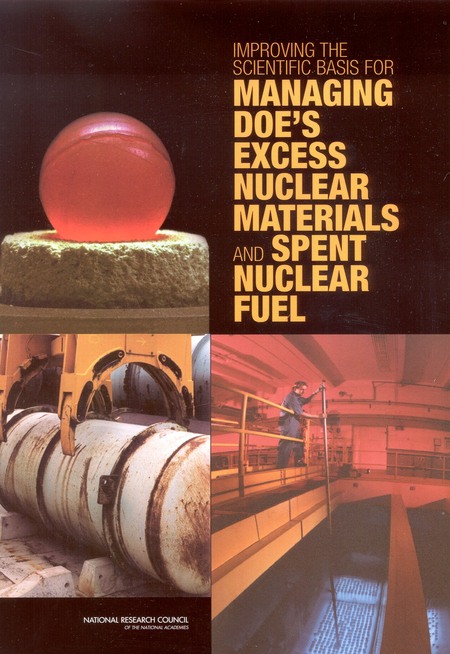 The production of nuclear materials for the national defense was an intense, nationwide effort that began with the Manhattan Project and continued throughout the Cold War. Now many of these product materials, by-products, and precursors, such as irradiated nuclear fuels and targets, have been declared as excess by the Department of Energy (DOE). Most of this excess inventory has been, or will be, turned over to DOE's Office of Environmental Management (EM), which is responsible for cleaning up the former production sites. Recognizing the scientific and technical challenges facing EM, Congress in 1995 established the EM Science Program (EMSP) to develop and fund directed, long-term research that could substantially enhance the knowledge base available for new cleanup technologies and decision making.

The EMSP has previously asked the National Academies' National Research Council for advice for developing research agendas in subsurface contamination, facility deactivation and decommissioning, high-level waste, and mixed and transuranic waste. For this study the committee was tasked to provide recommendations for a research agenda to improve the scientific basis for DOE's management of its high-cost, high-volume, or high-risk excess nuclear materials and spent nuclear fuels. To address its task, the committee focused its attention on DOE's excess plutonium-239, spent nuclear fuels, cesium-137 and strontium-90 capsules, depleted uranium, and higher actinide isotopes.