Materials and Society: From Research to Manufacturing: Report of a Workshop (2003)

Chapter:1. The Impact of Materials

Visit NAP.edu/10766 to get more information about this book, to buy it in print, or to download it as a free PDF.
« Previous: Front Matter
Page 1 Share Cite
Suggested Citation:"1. The Impact of Materials." National Research Council. 2003. Materials and Society: From Research to Manufacturing: Report of a Workshop. Washington, DC: The National Academies Press. doi: 10.17226/10721.
×

1 1 The Impact of Materials l SPEAKERS Keynote Acictresses Session ChairRobert PfahI, National Electronics Manufacturing Initiative Wm. A. Wulf, National Academy of Engineering Cherry Murray, Bell jabs, Lucent Technologies Setting the Scene: Impact of Materials Session Chair Henry Rack, Clemson University How Materials Contribute to Society, Venkatesh Narayanamurti, Harvard University Drivers in Materials Research, Mildrec! Dresselhaus, Massachusetts Institute of Technology PRESENTATIONS When historians look back at the latter half of the 1990s a decade or two hence, I suspect that they will conclude we are now living through a pivotal period in American economic history. New technologies that evolved from the cumulative innovations of the past half-century have now begun to bring about dramatic changes in the way goods and services are produced and in the way they are distributed to final users. While the process of innovation, of course, is never-ending, the development of the transistor after World War II appears in retrospect to have initiated a special wave of innovative synergies. It brought us the microprocessor, the computer, satellites, and the joining of laser and fiber-optic technologies. By the l990s, these and a number of lesser but critical innovations had, in turn, fostered an enormous new capacity to capture, analyze, and disseminate information. It is the growing use of information technology throughout the economy that makes the current period unique. ..~ . . Alan Green span '' Technology innovation and Its Economic Impact" Address to the National Technology Forum, St. Louis, Missouri April 7, 2000 Materials research ant! development has been described as making fundamental contributions to many, if not most, of the innovations to which Mr. Greenspan refers in

MATERIALS AND SOCIETY the above quotation. In much the same way as advances in materials enables! the clevelopment of transistors, materials scientists and engineers are working to aciciress the new challenges facet! by society now. Today, for example, our society is facing the new challenge of countering terrorism, ant! many discussants at the workshop believed science offers one of the most effective ways to combat that threat. Contributions from materials science ant! engineering will be key to this effort; they will, for example, play a role in innovative sensors, protective equipment, and hardened structures. Many additional social needs continue to challenge scientists ant! engineers to seek innovative technological solutions, many of which will involve increasing the functionality of a material while maintaining or lowering its cost of manufacture. In many instances, the impact a new material can have is unpredictable. The modern interplay between fundamental research and applications contradicts the traclitional view of a linear progression from discovery through development to commercialization. For example, the fractional quantum Hal] effect, whose discoverer was awarded the 1998 Nobel Prize in physics, was discovered in experiments on semiconducting layers of unprecedented purity and structural perfection. These material developments were motivated not so much by the search for new physical phenomena but by the clesire for high-performance electronic devices. While incorporating scientific advances into new products can sometimes take decades ant! follow unpredictable paths (as illustrated in Figure led, progress can also bring unexpected! bonuses such as the emergence of new properties of scientific interest. The role of materials in the evolution of technology is exemplified in the story of the discovery and exploitation of the transistor. The transistor is often considered! to be the base technology for the Information Age. The ability of this single crevice to have such unique characteristics and, as a result, such an overwhelming impact was due in no small part to the very special materials properties of silicon and its oxide. The Bell Telephone Laboratories were central to the development of these silicon-wafer materials and of transistor devices. However, over the past two decades, since the breakup of AT&T and subsequent deregulation of the telecommunications industry, research facilities such as Bell Labs have changed their fundamental focus to a much more short- term, market-driven outlook. This transition raises the question of how an(l where the next new technology will emerge to enable the next generation of (liscovery. Another interesting example of an enabling technology is the quantum corral. This advance, which consists of atoms individually positioned on a surface and promises to allow the manipulation of individual electrons, could pave the way for rapid developments in nanotechnology, but little development has yet occurred. Such technologies may be slow to reach commercial application because industrial research capabilities are increasingly focusing on short-term needs. Nonetheless, just as past materials discoveries led to mature industries like semiconductors and magnetics, exciting new areas are emerging. Some of the most promising opportunities are at the intersection of traditional research fields such as materials science and biology. The opportunities include such groundbreaking developments as bioactive medical devices and microbes for mineral processing. in some cases, the search for dramatic advances is motivated by the impending physical limits of some critical technologies. For example, both new materials and the ~ Lillian Hoddeson and Michael Riordan. 1997. Crystal Fire. New York, N.Y.: W.W. Norton. 2

THE IMPA CT OF MA TERIALS new architectures enabled by those materials will be needed to accommodate the rapidly increasing demand for high-capacity data storage. Several new materials and tools were identified in presentations at the workshop that may facilitate impressive technology gains like those we have come to expect. Speakers at the workshop also noted that the erosion of industry support in basic materials science research might delay the potential contributions of new developments. Increased foreign government and industry support can also potentially mitigate the impact of delayed U.S. contributions. Ultimately, society and economics will demand certain characteristics from materials of the future. The industrial sector frequently uses the words stronger, lighter, and cheaper to characterize new development. Several speakers at the workshop identified demands for new technology in national security, energy security, and environmental quality. These new technologies, will, in turn, demand new materials. Several presentations at the workshop emphasized the increasingly interdisciplinary nature of materials science and engineering and the growing diversity of expertise on the part of those who participate in materials research. In spite of the tremendous opportunities, the field faces a shortage of talented, well-trained scientists and engineers. Participants in the discussion also noted the dramatic decrease in recent years in the percentage of U.S. citizens pursuing degrees in the physical sciences and engineering. Several felt that if this problem is not addressed, the United States will not retain its global leadership position in materials science and engineering or in the economically important industries that flow from the field. Comments from the Speakers "The 'dot.com bust' of the last year demonstrates eloquently that we do not live in a virtual world, and that everything is made of something." Venkatesh Narayanamurty, Harvard University "Magnetic storage is now cheaper than paper storage, and more advances are coming. All these technologies are based on improvements in materials science." Cherry Murray, Lucent Technologies "Today's students will develop such exciting new materials as carbon nanotubes and materials systems that self-assemble." Mildred Dresselhaus, Massachusetts Institute of Technology "While the United States develops a research and development agenda for counter- terrorism, scientists and engineers from the Academies will provide a valuable contribution." Wm. A. Wulf, National Academy of Engineering 3

Next: 2. The Role of Materials in Critical Infrastructure »
Materials and Society: From Research to Manufacturing: Report of a Workshop Get This Book
× 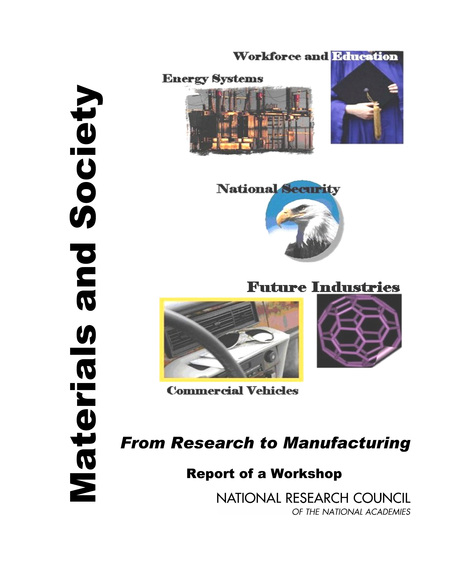