A Review of the EPA Water Security Research and Technical Support Action Plan: Parts I and II (2004)

Visit NAP.edu/10766 to get more information about this book, to buy it in print, or to download it as a free PDF.
Page i Share Cite
Suggested Citation:" Front Matter." National Research Council. 2004. A Review of the EPA Water Security Research and Technical Support Action Plan: Parts I and II. Washington, DC: The National Academies Press. doi: 10.17226/10772.
×

THE NATIONAL ACADEMIES PRESS 500 Fifth Street, N.W. Washington, DC 20001 NOTICE: The project that is the subject of this report was approved by the Governing Board of the National Research Council, whose members are drawn from the councils of the National Academy of Sciences, the National Academy of Engineering, and the Institute of Medicine. The members of the panel responsible for the report were chosen for their special competences and with regard for appropriate balance. Support for this study was provided by the U.S. Environmental Protection Agency under cooperative agreement number 68-C-03-037, work assignment # 0-2. Any opinions, findings, conclusions, or recommendations expressed in this publication are those of the authoress and do not necessarily reflect the views of the organizations or agencies that provided support for the project. International Standard Book Number 0-309-08982-4 (Book) International Standard Book Number 0-309-52628-0 (PDF) Additional copies of this report are available from the National Academies Press, 500 5th Street,N.W., Lockbox285, Washington, DC 20055; (800) 624-6242 or(202) 334-3313 (in the Washington metropolitan area); Internet, http://www.nap.edu Copyright 2004 by the National Academy of Sciences. All rights reserved. Printed in the United States of America

Preface Water utilities have a long history of planning in preparation for emergencies, particularly natural disasters. But contingency and emergency planning has taken on a new dimension with current concern about potential threats to water system security. The range of crises that have become plausible has expanded, and utilities now are considering more robust security procedures and emergency plans than they have historically had in place. When it comes to ensuring a water system's security, few utilities, regardless of size or geographic location, can function independently. The nation's water utilities and agencies have an urgent need for the knowledge, information, and guidance related to water security, but they will need more than research and technical support if they are to effectively improve security. To achieve the highest possible level of security, utilities need to carry out emergency preparation, response, and recovery planning in conjunction with other agencies. ~ 1 ~ September 11, 2001 created awareness of our country's vulnerabilities, led to a reassessment of our homeland security measures, and ultimately instigated the production of more effective contingency plans. One manifestation of this productivity is the Water Security Research and Technical Support Action Plan (Action Plan), prepared by the Environmental Protection Agency (EPA) to address current water security issues. The following report was produced by the National Research Council's (NRC) Panel on Water System Security Research. The pane! was organized as part of a broader NRC Review of EPA Homeland Security Efforts in the areas of water systems and safe buildings in response to an EPA request. In order to provide timely recommendations and guidance to the EPA, the panel conducted a fast-track review of the Action Plan in two stages, with each stage resulting in the production of a short report. Overall, the panel was impressed by the EPA's dedication to the development of a comprehensive and useful plan in support of the nation's water security needs. The first stage of the panel's review determined whether the EPA Action Plan adequately identified research and technical support needs in the area of water system security. These findings are included as Part I of this publication, which was originally released in July 2003. The next stage of the panel's review v ~ ,. . . .

Vl Preface examined the Action Plan in greater detail and assessed the specific research projects and their prioritization as presented in the Action Plan. These findings are included as Part II, which was originally released in October 2003. While these two reports were produced separately, they are intended to be read together and, therefore, are bound together here. The NRC composed a panel that represents a range of scientific, technical, public policy, utility management, and social science expertise. The areas of water system management, operations, and vulnerabilities; drinking water ant! wastewater chemistry; drinking water and wastewater microbiology; microbial and chemical risk assessment; risk communication; and water treatment and decontamination are all included in the panel members' areas of specialization. The findings of the pane} are based on their own expertise as well as discussions~with the creators of the EPA Action Plan. I would like to thank and express my appreciation to our panel members for recognizing the high priority of this effort and for dedicating their time and talents to produce this report on a fast-track schedule. I would also like to acknowledge consultant David Siburg for sharing his expertise in the area of small water systems. We were guided by the Water Science and Technology Board (WSTB) ant! its director Stephen Parker. Without the extraordinary help of our study director, Stephanie Johnson who set the pace, focus, and agenda for our work, maintained contact with the study sponsor, and acted as liaison to ensure compliance with NRC policies, this effort would not have been possible. Individual schedules of the panel members spread them across the globe as this report came together. Stephanie worked tirelessly to compose draft text from several separate pieces which panel members could then review, making sure that the final product represented our best thinking en cl advice. Ably helping Stephanie were senior staff officer Laura Ehlers, who assisted the project in a supervisory role and contributed substantially to the report's development, and Dorothy Weir, who as our project assistant was responsible for meeting logistics, research assistance, and editorial tasks. The pane! also appreciates the assistance of Jon Herrmann and Alan Hais, EPA Office of Research and Development and Hiba Shukairy and Grace Robiou, EPA Office of Water who were extremely helpful in providing information on EPA's water security research efforts to pane] members and WSTB staff to assure the creation of a useful report. In addition, we also thank those who made presentations, offered their professional insights, entertained questions, and contributed to discussions during the panel meeting. These experts include Cynthia Dougherty and Janet Pawlukiewicz from the EPA Office of Water, Paul Gilman and Timothy Oppelt from the EPA Office of Research and Development, and John Vitko, Department of Homeland Security. This report was reviewed in draft form by individuals chosen for their diverse perspectives ant! technical expertise in accordance with the procedures approved by the NRC's Report Review Committee. The views and opinions expressed by the reviewers were assumed to be those of the individual reviewers and not their affiliated agencies. The purpose of this independent review is to provide candid and critical comments that will assist the institution in making its published report as sound as possible and to ensure the report meets institutional standards for objectivity, evidence, and responsiveness to the study charge. The review comments and draft manuscript remain confidential to protect the integrity of the deliberative process. Parts I and II of this report were reviewed independently of one another and by separate reviewers. We wish to thank the following individuals for their review of Part I of this report: Lewis M. Branscomb, Harvard University; Sue B. Clark, Washington State University; Yacov Y. Haimes, University of Virginia; Rebecca T. Parkin, The George Washington

Preface . . V11 University, Brian L. Ramaley, Newport News Waterworks; and David R. Siburg, Kitsap Public Utility District. We also thank the following individuals for their review of Part II of the report: Lieutenant Colonel Patrick Bettane, Israel Defense Forces; Anne K. Camper, Montana State University; A. Russell Flegal, University of California, Santa Cruz; Peter H. Gleick, Pacific Institute for Studies in Development, Environment, and Security; Anna K. Harding, Oregon State University; Nancy G. Love, Virginia Polytechnic Institute and State University; Brian L. Ramaley, Newport News Waterworks; Deborah L. Swackhamer, University of Minnesota; John S. Young, The Hebrew University of Jerusalem. Although the reviewers listed above have provided many constructive comments and suggestions, they were not asked to endorse the conclusions or recommendations, nor did they see the final draft of the report before its release. The reviews of this report were overseen by Robert A. Frosch, Harvard University. Appointed by the National Research Council, he was responsible for making certain that an independent examination of each report was carefully carried out in accordance with the institutional procedures anti that all review comments were carefully considered. Responsibility for the final content of this report rests entirely with the authoring panel and the institution. Garret Westerhoff Chair

X REFERENCES APPENDIXES B C Contents Genesis of this Study and Charge to the Panel, 62 ORGANIZING PRINCIPLES FOR WATER SECURITY REVIEW OF PROJECTS IDENTIFIED IN THE ACTION PLAN Drinking Water, 68 Wastewater, 94 Implementation 99 Original and Suggested Time Lines for EPA Research Projects Water Science and Technology Board Biographical Sketches for the Panel on Water System Security Research and NRC Staff 64 67 102 105 115 116 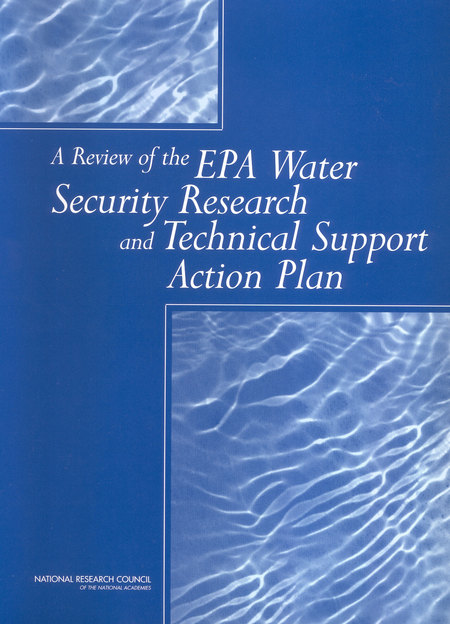 The report examines a draft plan, prepared by the Environmental Protection Agency, that identifies critical security issues for drinking water and wastewater and outlines related research and technical support needs. This report recommends increased attention to interagency coordination and encourages additional consideration of current restrictions on secure information dissemination. It further suggests that EPA incorporate the results of their research activities into an integrated water security guidance document to improve support for water and wastewater utilities.