Visit NAP.edu/10766 to get more information about this book, to buy it in print, or to download it as a free PDF.
Page i Share Cite
Suggested Citation:"Front Matter." National Research Council. 2003. Planning the 2010 Census: Second Interim Report. Washington, DC: The National Academies Press. doi: 10.17226/10776.
×

THE NATIONAL ACADEMIES PRESS 500 Fifth Street, N'W ~Washington, DC 20001 NOTICE: The project that is the subject of this report was approved by the Governing Board of the National Research Council, whose members are drawn from the councils of the National Academy of Sciences, the National Academy of Engineering, and the Institute of Medicine. The members of the committee responsible for the report were chosen for their special competences and with regard for appropriate balance. The project that is the subject of this report was supported by contract no. 50-YABC-8-66016 between the National Academy of Sciences and the U.S. Census Bureau. Any opinions, findings, conclusions, or recommendations expressed in this publication are those of the authoress and do not necessarily reflect the views of the organizations or agencies that provided support for the project. International Standard Book Number 0-309-08968-9 (book) International Standard Book Number 0-309-52578-0 (PDF) Additional copies of this report are available from the National Academies Press, 500 Fifth Street, NW, Washington, D.C. 20001; (202) 334-3096; Internet, http://www.nap.edu Copyright 2003 by the National Academy of Sciences. All rights reserved. Printed in the United States of America. Suggested citation: National Research Council (2003~. Planning the 2010 Census: Second Interim Report. Panel on Research on Future Census Methods. Daniel L. Cork, Michael L. Cohen, and Benjamin F. King, eds. Committee on National Statistics. Washington, DC: The National Academies Press.

Acknowledgments THE PANEL ON RESEARCH ON FUTURE CENSUS METHODS of the Committee on National Statistics (CNSTAT) is pleased to submit this second interim report and wishes to thank the many people who have contributed to the panel's work en cl helped make possible the preparation of this interim report. We thank the staff of the U.S. Census Bureau, uncler the leadership of director C. Louis Kincannon, deputy director Hermann Habermann, anc! former acting director William Barron, for their professionalism anc! their cooperation with the panel. In particular, we appreciate the commitment of Preston lay Waite, associate director for decennial census, to working with the panel even cluring the difficult transition period between closing one decennial census anct starting another. We thank Rajencira Singh, the panel's lead liaison with the Census Bureau, for his attention to the panel's neects. In acictition, the work of the panel has been greatly facilitated by its work in smaller, working groups. Each of the panel's working groups has a designated liaison insicle the bureau; they have been uniformly helpful anc! supportive, anct we look forward to continucct interaction over the panel's remain- ing year of service. These primary sources of contact inclucle: Robert Marx anct Lincla Pike (Acictress List Development); Tracy Wessler anct Andrea Brinson (Computing Systems anct Technical Infrastructure); Ton Clark (Coverage Evaluation anc! Statistical Infrastructure); en c! Fay Nash (Enumeration Methocls). The panel has also benefited from its interaction with other talented members of the Census Bureau staff, . . V11

. . . vine . PLANNING THE 2010 CENSUS 1nclucling Nancy Gordon, Howarc! Hogan, Donna Kostanich, Alfreclo Navarro, km Treat, Alan Tupek, anc! Frank Vitrano. The tragic cleath of Charles H. "Chip" Alexander, Tr., in early September 2002 was an incalculable loss for the entire research com- munity surrounding the decennial census anct its related programs. The chief statistical methoclologist for the American Community Survey (ACS), Chip was also the panel's clesignatect liaison on ACS matters. One true pleasure of service on this panel was the opportunity for interaction with someone of Chip's great knowledge anct good humor, anc! we join his friends anc! colleagues in mourning his loss. Our panel colleague Joseph Salvo, of the New York City Depart- ment of City Planning, ably chaired a working group to evaluate the Local Update of Census Aciciresses (LUCA) program from the local government perspective. Jointly sponsored by this panel and our sister panel, the Panel to Review the 2000 Census, LUCA working group members ctrew from their firsthand expertise in documenting their LUCA experience in case study form. We thank the members of this group Abby Hughes, Terry Jackson, Tim Koss, anct Harry Wolfe anc! working group consultant Patricia Becker for their efforts, a solict reference work for our panel anct the entire research community. In particular, we thank working group member Shoreh Elhami, of the Delaware County (Ohio) Auclitor's Office, for her continuing consultation with the panel on census anc! geography matters. In April 2001 the panel opened its first examination of the proposed MAF/TIGER Enhancements Program by inviting a ctistinguishect set of discussants to share their opinions on the proposer! plans. In acicli- tion to Shoreh Elhami, this roster of discussants incluclecl: Rick Ayers (ESRI), Donalc! Cooke (Geographic Data Technology, Inc.), Michel Lettre (State of Marylancl), and Sarah Nusser (Department of Statis- tics, Iowa State University). We thank them for their time anc! their talents. T · . Logistical arrangements tor panel act1v1t1es were made with great skill by Agnes Gaskin, senior project assistant. Research assistant Marisa Gerstein deserves thanks for her help with maintaining an archive of materials related to both this panel anct the Panel to Review the 2000 Census. Former CNSTAT staff member Carrie Muntean, now stationed with the U.S. Foreign Service, clic! exemplary work for both panels anct, in particular, with the LUCA Working Group.

ACKNOWLEDGMENTS MIX CNSTAT consultant Meyer Zitter's zeal in collecting information for both panels is greatly appreciated. Finally, virtually all of the activi- ties of the Committee on National Statistics benefit greatly from the involvement anc! advice of Constance Citro, senior program officer. Given her role as study director of our sister Panel to Review the 2000 Census, we have drawn quite heavily from her wisdom anc! benefit from her contributions. This report has been reviewoc! in ciraft form by inclivicluals chosen . for their diverse perspectives anct technical expertise, in accordance with procedures approver! by the Report Review Committee of the National Research Council (NRC). The purpose of this inclepenclent review is to provide canclic! anc! critical comments that will assist the institution in making the published report as sounc! as possible anc! to ensure that the report meets institutional stanclarcts for objectivity, evidence, anct responsiveness to the study charge. The review comments anc! ciraft manuscript remain confidential to protect the integrity of the clelibera- tive process. We thank the following inctivicluals for their participation in the review of this report: Margo J. Anclerson, Department of History, University of Wisconsin, Milwaukee; Lawrence Brown, Department of Statistics, University of Pennsylvania; Barbara Everitt Bryant, Uni- versity of Michigan Business School; Stephen Fienberg, Department of Statistics, Carnegie Mellon University; D. Bruce Petrie, Canadian Institute for Health Information; anc! Kenneth Wachter, Department of Demography, University of California, Berkeley. Although the reviewers listed above proviclec! many constructive comments anct suggestions, they were not askoct to endorse the conclu- sions or recommenclations, nor did they see the final draft of the report before its release. The review of the report was overseen by Robert Hauser, Center for Demography, University of Wisconsin. Appointed by the National Research Council, he was responsible for making cer- tain that an inclepenclent examination of the report was carried out in accordance with institutional procedures anct that all review comments were carefully consiclerecI. Responsibility for the final content of this report rests entirely with the authoring panel anct the institution. Benjamin F. King, Chair Panel on Research on Future Census Methods

Next: Executive Summary »
Planning the 2010 Census: Second Interim Report Get This Book
× 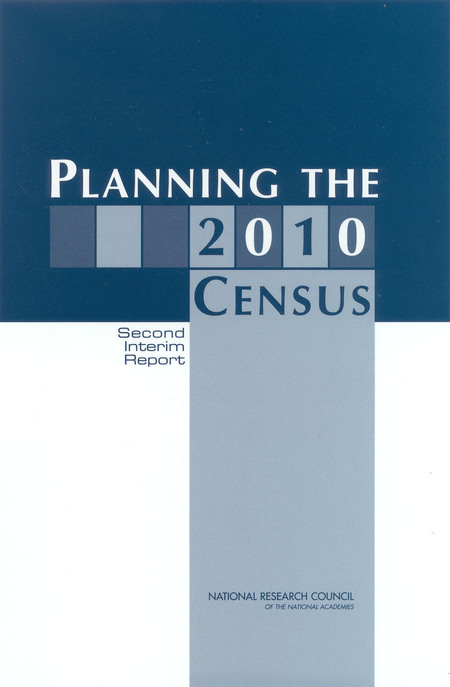 The Panel on Research on Future Census Methods has a broad charge to review the early planning process for the 2010 census. Its work includes observing the operation of the 2000 census, deriving lessons for 2010, and advising on effective evaluations and tests. This is the panel's third report; they have previously issued an interim report offering suggestions on the Census Bureau's evaluation plan for 2000 and a letter report commenting on the bureau's proposed general structure for the 2010 census.