Get This Book
Visit NAP.edu/10766 to get more information about this book, to buy it in print, or to download it as a free PDF.
« Previous: Front Matter
Page 1 Share Cite
Suggested Citation:"Introduction." National Research Council. 2003. Estimating Climate Sensitivity: Report of a Workshop. Washington, DC: The National Academies Press. doi: 10.17226/10787.
×

“Climate sensitivity” is a term used to characterize the response of the climate system to an imposed forcing, usually radiative. This term has come to have a variety of usages by the scientific community, but it is most commonly defined as the equilibrium global mean surface temperature change that occurs in response to a doubling of atmospheric carbon dioxide (CO2) concentration. Climate sensitivity is a function of numerous feedbacks among clouds, water vapor, and many other components of the earth’s climate system. It is presently one of the largest sources of uncertainty in projections of long-term global climate change.

Based on analysis of several leading climate models, the Intergovernmental Panel on Climate Change / Third Assessment Report (IPCC/TAR) estimated this climate sensitivity to be in the range of 1.7-4.2°C (IPCC, 2001). Although this range of estimates is very similar to that proposed by a National Research Council (NRC) panel more than two decades ago (NRC, 1979), the confidence in this range is now substantially higher, particularly for the lower limit of 1.7°C. Recent studies have provided valuable insights into the factors that affect climate sensitivity and have introduced new approaches for quantifying this critical parameter. Some recent investigations have suggested that climate sensitivity could be greater than the values encompassed in the IPCC range (e.g., Andronova and Schlesinger, 2001; Forest et al., 2002), which would imply that global warming could be a more severe problem than currently projected. However, considerable skepticism exists regarding the plausibility of these high-end climate sensitivity values. Such issues are of great interest not only to the scientific community, but also to policy makers and others who must consider possible strategies for mitigating and adapting to climate change.

The National Academies were asked to organize a workshop in which a diverse group of top climate modelers and diagnosticians would examine our current capabilities and limitations in quantifying climate sensitivity and consider whether there may be alternative approaches for characterizing climate response to more effectively meet the information needs of policy makers. To help plan the workshop, a small steering committee was drawn from members of the NRC’s Climate Research Committee and Board on Atmospheric Sciences and Climate. The workshop was held in Washington, D.C., on January 30-31, 2003. Fifteen scientists were invited to participate as speakers, and were joined by numerous representatives from federal agencies including the Environmental Protection Agency, National Oceanic and Atmospheric Administration, National Aeronautics and Space Administration, Department of Energy, and National Science Foundation and other organizations (see Appendix B). The meeting was structured as a series of presentations and panel discussions followed by an open discussion among all the participants (see Appendix A). The organization of this report closely mirrors that of the workshop.

Participants were asked to address questions such as the following:

An overarching goal of this meeting was to provide a forum in which federal agency managers and officials could hear the views of independent experts to ensure that the government has the best available scientific information and judgment as a basis for policy and regulatory deliberations. It should be emphasized that this activity was designed as a workshop and not a consensus study. Although the participants did look for points of common agreement, following standard Academy rules for workshops, they did not attempt to reach consensus on conclusions or recommendations. This report summarizes the workshop discussions; the ideas presented here reflect the views of the individual participants and are not endorsed by the National Academies.

Next: Opening Session »
Estimating Climate Sensitivity: Report of a Workshop Get This Book
× 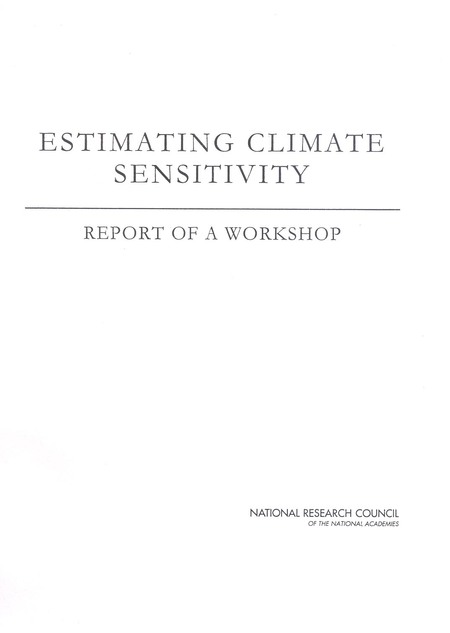 “Climate sensitivity” is a term used to characterize the response of the climate system to an imposed forcing, and is most commonly used to mean the equilibrium global mean surface temperature change that occurs in response to a doubling of atmospheric carbon dioxide concentration. The purpose of this workshop was to explore current capabilities and limitations in quantifying climate sensitivity and consider whether there are alternative approaches for characterizing climate response that might better suit the information needs of policy makers.