Visit NAP.edu/10766 to get more information about this book, to buy it in print, or to download it as a free PDF.
Page i Share Cite
Suggested Citation:"Front Matter." National Research Council. 2003. Innovations in Software Engineering for Defense Systems. Washington, DC: The National Academies Press. doi: 10.17226/10809.
×

THE NATIONAL ACADEMIES PRESS · 500 Fifth Street, NW · Washington, DC 20001 NOTICE: The project that is the subject of this report was approved by the Governing Board of the National Research Council, whose members are drawn from the councils of the National Academy of Sciences, the National Academy of Engineering, and the Institute of Medicine. The members of the committee responsible for the report were chosen for their special competences and with regard for appropriate balance. This material is based upon work supported by the National Science Foundation under Grant No. SBR-9709489. Any opinions, findings, conclusions, or recommendations expressed in this publication are those of the authorLs) and do not necessarily reflect the views of the National Science Foundation. International Standard Book Number 0-309-08983-2 (Book) International Standard Book Number 0-309-52631-0 (PDF) Library of Congress Control Number 2003110750 Additional copies of this report are available from National Academies Press, 500 Fifth Street, N.W., Lockbox 285, Washington, DC 20055; (800) 624-6242 or (202) 334- 3313 (in the Washington metropolitan area); Internet, http://www.nap.edu. Printed in the United States of America. Copyright 2003 by the National Academy of Sciences. All rights reserved. Suggested citation: National Research Council. (2003~. Innovations in Software Engi- neeringforDefense Systems. Oversight Committee for the workshop on Statistical Meth- ods in Software Engineering for Defense Systems. S.R. Dalal, ).H. Poore, and M.L. Cohen, eds. Committee on National Statistics, Division of Behavioral and Social Sci- ences and Education. Washington, DC: The National Academies Press.

Acknowledgments The Workshop on Statistical Methods in Software Engineering for Defense Systems, jointly sponsored by the Committee on National Statistics and the Committee on Applied and Theoretical Statistics of the National Research Council (NRC), grew out of a need to more fully examine issues raised in the NRC reports Statistics, Testing, and Defense Acquisition: New Approaches and Methodological Improvements (NRC, 1998) and Reliability Iss?~esfor Defense Systems: Report of a Workshop (NRC, 20021. The former stressed, among other things, the importance of software re- quirements specification, and the latter demonstrated the benefits gained from model-based testing. Concurrent with these activities, there was an increasing recognition in the Office of the Secretary of Defense that soft- ware problems were a major source of defects, delays, and cost overruns in defense systems in development, and that approaches to addressing these problems were very welcome. The Workshop on Statistical Methods in Software Engineering for Defense Systems, which took place July 19-20, 2001, was funded jointly by the offices of the Director of Operational Test and Evaluation (DOT&E) and the Undersecretary of Defense for Acquisition, Technology, and Logis- tics (OUSD(AT&L)~. DOT&E, headed by Tom Christie, was ably repre- sented at various planning meetings by Ernest Seglie, the science advisor for DOT&E, and OUSD (AT&L) was represented by Nancy Spruill. Both Ernest Seglie and Nancy Spruill were enormously helpful in suggesting topics for study, individuals to serve as expert defense discussants, and in- . . v''

ACKNOWLEDGMENTS AX sor. Further, we would like to give special thanks to Constance Heitmeyer and Amjad Umar for their help in writing sections of the report. We would also like to thank Michael Cohen for help in organizing the workshop and in drafting sections of the report, and Michael Siri for his excellent attention to all administrative details. We would also like to thank Cameron Fletcher for meticulous technical editing of the draft report, catching numerous errors. This report has been reviewed in draft form by individuals chosen for their diverse perspectives and technical expertise, in accordance with proce- dures approved by the Report Review Committee of the NRC. The pur- pose of this independent review is to provide candid and critical comments that will assist the institution in making the published report as sound as possible and to ensure that the report meets institutional standards for ob- jectivity, evidence, and responsiveness to the study charge. The review comments and draft manuscript remain confidential to protect the integ- rity of the deliberative process. We thank the following individuals for their participation in the re- view of this report: Robert M. Bell, AT&T Research Laboratories, Florham Park, NJ, Philip E. Coyle, III, Consultant, Los Angeles, CA, Michael A. Houghtaling, IBM/ Systems Group/ Storage Systems Division, Tucson, AZ, and Lawrence Markosian, QSS Group, Inc., NASA Ames Research Center, Moffett Field, CA. Although the reviewers listed above have provided many constructive comments and suggestions, they were not asked to endorse the conclusions or recommendations nor did they see the final draft of the report before its release. The review of this report was overseen by William G. Howard, fir., Independent Consultant, Scottsdale, AZ. Appointed by the NRC, he was responsible for making certain that an independent ex- amination of this report was carried out in accordance with institutional procedures and that all review comments were carefully considered. Re- sponsibility for the final content of this report rests entirely with the authoring committee and the institution. Daryl Pregibon, Chair Workshop on Statistical Methods in Software Engineering for Defense Systems

Next: Executive Summary »
Innovations in Software Engineering for Defense Systems Get This Book
× 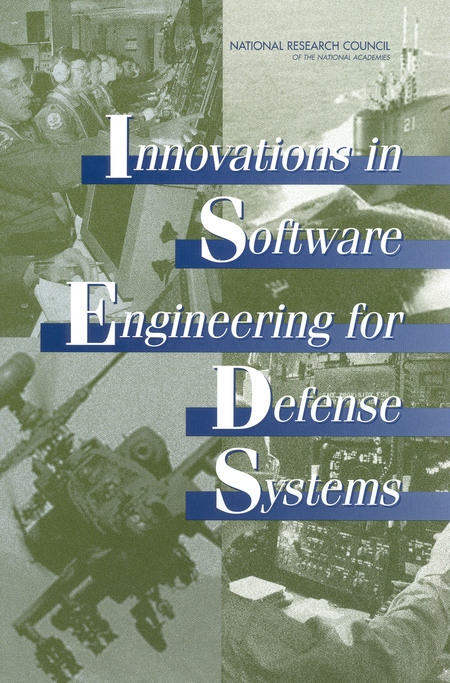 Recent rough estimates are that the U.S. Department of Defense (DoD) spends at least $38 billion a year on the research, development, testing, and evaluation of new defense systems; approximately 40 percent of that cost-at least $16 billion-is spent on software development and testing. There is widespread understanding within DoD that the effectiveness of software-intensive defense systems is often hampered by low-quality software as well as increased costs and late delivery of software components. Given the costs involved, even relatively incremental improvements to the software development process for defense systems could represent a large savings in funds. And given the importance of producing defense software that will carry out its intended function, relatively small improvements to the quality of defense software systems would be extremely important to identify. DoD software engineers and test and evaluation officials may not be fully aware of a range of available techniques, because of both the recent development of these techniques and their origination from an orientation somewhat removed from software engineering, i.e., from a statistical perspective. The panel's charge therefore was to convene a workshop to identify statistical software engineering techniques that could have applicability to DoD systems in development.