Chapter:Appendix A: Statement of Task and Study Approach

Get This Book
Visit NAP.edu/10766 to get more information about this book, to buy it in print, or to download it as a free PDF.
« Previous: Findings, Recommendations, and the Big Question
Page 51 Share Cite
Suggested Citation:"Appendix A: Statement of Task and Study Approach." Transportation Research Board and National Research Council. 2003. Securing the Future of U.S. Air Transportation: A System in Peril. Washington, DC: The National Academies Press. doi: 10.17226/10815.
×

A
Statement of Task and Study Approach

Initially, the committee will assess the visions and goals contained in the documents listed below as they pertain to civil aviation in the United States.1

The first document in the above list proposes key goals for national civil aeronautics research covering both near-and far-term applications, along with program initiatives intended to achieve those goals. The second report recommends a new national transportation vision, and the last three identify current constraints and recommend research and development investments to improve the air transportation system over the next 25 years, respectively.

The committee’s assessment will identify compatibilities and incompatibilities among the visions and goals described in the above documents. The committee will also hold a workshop to solicit inputs from the aeronautics community regarding the extent to which advanced technology will be able to achieve future goals and visions in the next 25 to 50 years. The committee’s assessment will also consider how advanced technology can help civil aviation succeed in the new threat and heightened security environment that exists in the aftermath of the attacks of September 11, 2001. The committee will refrain from creating a new vision.

Phase 1 will result in two reports. The first report will contain the presentations of the workshop (with no findings or recommendations). The workshop participants will be asked to provide electronic copies of their presentations, and the workshop report may be disseminated in the form of a CD-ROM computer disk. No later than August 2002, the committee will also issue a letter report summarizing its assessment of future goals and visions for national civil aviation. This report was requested by the White House Office of Science and Technology Policy.

Phase 2 will assess technology goals for 2050. Specific tasks are as follows:

The committee’s third and final report, to be issued 26 months from study initiation, will summarize the results of Phase 2, including findings and recommendations for action.

The committee will not collect classified military information. The committee will also avoid making findings or recommendations in areas that are discussed in the source documents for this study, but which are outside the scope of this study. Out-of-scope topics include development of technology for building exoatmospheric flight vehicles; the organization and role of government agencies and advisory groups; levels of government funding (the committee’s recommendations should focus on funding priorities rather than any particular level of funding); methods of interaction among government, industry, and academia; sources and use of private capital; size of the required workforce; legal and regulatory frameworks; and U.S. defense, social, foreign, and economic policies. Satellite-based communications, navigation, and surveillance systems are within the scope of the study.

During Phase 1, as requested by the study sponsors, the committee refrained from creating a detailed vision of its own. Instead, the committee evaluated existing visions and noted shortcomings that should be corrected in future visions.

During Phase 2, the assessment of technology goals for the year 2050 began with the four tasks outlined above. Upon review and discussion—and with the support of the sponsors—the committee agreed to focus its efforts on three technology areas where research in the short term could lead to substantial long-term improvements in key areas of the vision and goals:

Next: Appendix B: Comparative Assessment of Goals and Visions »
Securing the Future of U.S. Air Transportation: A System in Peril Get This Book
× 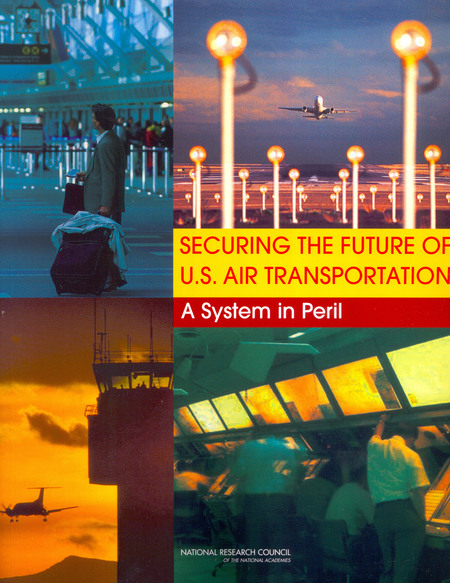