Characterizing Exposure of Veterans to Agent Orange and Other Herbicides Used in Vietnam: Final Report (2003)

Visit NAP.edu/10766 to get more information about this book, to buy it in print, or to download it as a free PDF.
Page i Share Cite
Suggested Citation:"Front Matter." Institute of Medicine. 2003. Characterizing Exposure of Veterans to Agent Orange and Other Herbicides Used in Vietnam: Final Report. Washington, DC: The National Academies Press. doi: 10.17226/10819.
×

ii THE NATIONAL ACADEMIES PRESS 500 Fifth Street, N.W. Washington, DC 20001 NOTICE: The project that is the subject of this report was approved by the Governing Board of the National Research Council, whose mem- bers are drawn from the councils of the National Academy of Sciences, the National Academy of Engineering, and the Institute of Medicine. The members of the committee responsible for the report were chosen for their special competences and with regard for appropriate balance. Support for this project was provided by the US Department of Veterans Affairs. The project was supported by Cooperative Agreement V101 (93)P-1637 between the National Academy of Sciences and the US Department of Veterans Affairs. The views presented in this report are those of the Institute of Medicine Committee on the Assessment of Wartime Exposure to Herbicides in Vietnam and are not necessarily those of the funding agencies. Copies of this report are available at: www.nap.edu. For more information about the Institute of Medicine, visit the IOM home page at: www.iom.edu. Copyright 2003 by the National Academy of Sciences. All rights reserved. Printed in the United States of America. The serpent has been a symbol of long life, healing, and knowledge among almost all cultures and religions since the beginning of recorded history. The serpent adopted as a logotype by the Institute of Medicine is a relief carving from ancient Greece, now held by the Staatliche Museen in Berlin.

REVIEWERS vii REVIEWERS This report has been reviewed in draft form by persons chosen for their diverse perspectives and technical expertise, in accordance with procedures approved by the National Research Council's Report Review Committee. The purpose of this independent review is to provide candid and critical comments that will assist the institution in making its published report as sound as possible and to ensure that the report meets institutional standards of objectivity, evidence, and responsiveness to the study charge. The review comments and draft manuscript remain confidential to protect the integrity of the deliberative process. We wish to thank the following for their review of this report: Howard M.Kipen, University of Medicine and Dentistry of New JerseyâRobert Wood Johnson Medical School; Rutgers University David A.Savitz, University of North Carolina School of Public Health Kirk R.Smith, University of California, Berkeley David F.Utterback, National Institute for Occupational Safety and Health Although the reviewers listed above have provided many constructive comments and suggestions, they were not asked to endorse the conclusions or recommendations, nor did they see the final draft of the report before its release. The review of this report was overseen by Jonathan M.Samet, Johns Hopkins University. Appointed by the National Research Council and Institute of Medicine, he was responsible for making certain that an independent examination of this report was carried out in accordance with institutional procedures and that all review comments were carefully considered. Responsibility for the final content of this report rests entirely with the author committee and the institution.

PREFACE ix PREFACE In response to the concerns voiced by Vietnam veterans and their families, Congress called on the National Academy of Sciences (NAS) to review the scientific evidence on the possible health effects of exposure to Agent Orange and other herbicides (Public Law 102â4, enacted on February 6, 1991). The creation, in 1992, of the Institute of Medicine (IOM) committee tasked to conduct the review underscored the critical importance of approaching the question from a nonpartisan scientific standpoint. The study reported here is an outgrowth of that work, focusing on the assessment of wartime exposure to herbicides. The 1994 IOM report Veterans and Agent Orange noted that âexposure assessment has been a weak aspect of most epidemiologic studies of Vietnam veteransâ (page 18) and recommended that an effort be undertaken to develop exposure reconstruction models. The US Department of Veterans Affairs asked IOM to organize the effort, which led to the formation of the Committee on the Assessment of Wartime Exposure to Herbicides in Vietnam. As noted in the interim report released in April 2003 (IOM, 2003), the committee commends the work of the team of investigators from the Columbia University Mailman School of Public Health (Jeanne Mager Stellman, PhD, principal investigator) who carried out the exposure-assessment research. Their dogged pursuit of historical records has led to a substantial improvement in the quality and completeness of the information on wartime spraying and the people who may have been exposed to it. The geographic information system they developed is innovative and serves as an exemplar of how this technology can be exploited in exposure-characterization studies. And finally, the spirit of cooperation and collaboration shown by the Columbia University researchers greatly facilitated the committee's job of oversight and made its task enjoyable and intellectually engaging. David Butler served as the study director for this project. The committee would like to acknowledge the excellent work of IOM staff members Jennifer Cohen, Anna Staton, Elizabeth Albrigo, Joe Esparza, and James Bowers. Kathi Hanna, a consultant to the committee, provided valuable assistance by composing a summary of the Columbia University research effort that served as a foundation for the report text. Thanks are also extended to Melissa French and Jim Banihashemi, who handled the finances for the project; Linda Kilroy, Joan Rodda, Donald Holmes and Robin Cohen, who were responsible for contracting issues; Norman Grossblatt, who edited the manuscript; William McLeod, who conducted database searches; Jennifer Bitticks, who supervised the production of the report; and Rita Gaskins, who provided administrative support to the project. The committee greatly benefited from the input of scientists, researchers, government employees, veterans service organizations, and other interested persons who generously lent their time and expertise to help give committee members insight on particular issues, provide copies of newly released research, or answer queries concerning their work or experience. We thank them for their contributions. David G.Hoel, Chair

Next: ORIGIN OF THE STUDY »
Characterizing Exposure of Veterans to Agent Orange and Other Herbicides Used in Vietnam: Final Report Get This Book
× 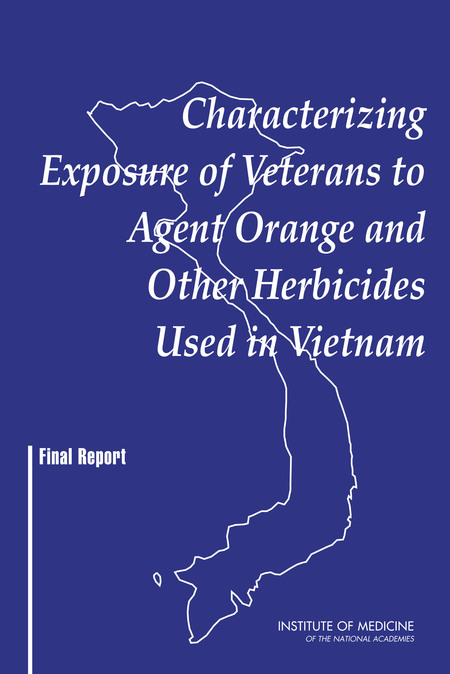