Biotechnology Research in an Age of Terrorism (2004)

Visit NAP.edu/10766 to get more information about this book, to buy it in print, or to download it as a free PDF.
Page i Share Cite
Suggested Citation:"Front Matter." National Research Council. 2004. Biotechnology Research in an Age of Terrorism. Washington, DC: The National Academies Press. doi: 10.17226/10827.
×

Il I ll 'I' I£ ~' II N 4l In ~~ ~~ \r N AN AGE OF TERRORISM Committee on Research Standards and Practices to Prevent the Destructive Application of Biotechnology Development, Security, and Cooperation Policy and Global Affairs NATIONAL RESEARCH COUNCIL OF THE NATIONAL ACADEMIES THE NATIONAL ACADEMIES PRESS Washington, D.C. www.nap.eclu

THE NATIONAL ACADEMIES PRESS 500 Fifth Street, N.W. Washington, DC 20001 NOTICE: The project that is the subject of this report was approved by the Governing Board of the National Research Council, whose members are drawn from the councils of the National Academy of Sciences, the National Academy of Engineering, and the Institute of Medicine. The members of the Committee responsible for the report were chosen for their special competences and with regard for appropriate balance. The development of this report was supported by the Alfred P. Sloan Foundation and the Nuclear Threat Initiative. Any opinions, findings, conclusions, or recommenda- tions expressed in this publication are those of the authoress and do not necessarily reflect the views of the organizations or agencies that provided support for the project. International Standard Book Number 0-309-08977-8 (Book) International Standard Book Number 0-309-52613-2 (PDF) Library of Congress Control Number 2003115100 Additional copies of this report are available from The National Academies Press, 2101 Constitution Avenue, N.W., Lockbox 285, Washington, DC 20055; (800) 624-6242 or (202) 334-3313 (in the Washington metropolitan area); Internet, www.nap.edu Copyright 2004 by the National Academy of Sciences. All rights reserved. Printed in the United States of America

Preface The charge to our Committee was to consider ways to minimize threats from biological warfare and bioterrorism without hindering the progress of biotechnology, which is essential for the health of the nation. This task is complicated because almost all biotechnology in service of human health can be subverted for misuse by hostile individuals or nations. The major vehicles of bioterrorism, at least in the near term, are likely to be based on materials and techniques that are available throughout the world and are easily acquired. Most importantly, a critical element of our defense against bioterrorism is the accelerated development of biotechnology to advance our ability to detect and cure disease. Since the development of biotechnol- ogy is facilitated by the sharing of ideas and materials, open communica- tion offers the best security against bioterrorism. The tension between the spread of technologies that protect us and the spread of technologies that threaten us is the crux of the dilemma. Although the National Academies have had many reports on national security, this is the first to deal specifically with national security and the life sciences. The thoughtful report on Scientific Communication and Na- tional Security (National Academy Press, 1982) had as its charge "to exam- ine the relation between scientific communication and national security in light of the growing concern that foreign nations are gaining military ad- vantage from such research"; however, it did not deal with the life sci- ences. Since that report, much has happened to justify an examination of the life sciences in this context the discovery of nations with clandestine research programs dedicated to the creation of biological weapons, the anthrax attacks of 2001, the rapid pace of progress in biotechnology, and . . v''

vIll PREFFACE the accessibility of these new technologies via the Internet. All of these developments have prompted the current report. The goal of this report is to make recommendations that achieve an appropriate balance between the pursuit of scientific advances to improve human health and welfare and national security. In preparing this report our Committee examined ways by which the spread of technology, methods, materials and information could be lim- ited to constructive activities concerned with medical progress. The dual use nature of these advances strongly argues that any initiative must de- monstrably increase our net security. Erring on the side of prudence and favoring the inhibition of information flow could retard the development of successful defenses and seriously compromise our nation's health. Therefore, the challenge is for the scientific community to develop a sys- tem that permits fundamental research to proceed unimpeded, while identifying research with great potential for misuse. The scientific community historically has demonstrated its ability to lead the way in the responsible development of new technologies. After the Asilomar conference in 1975, scientists designed and followed a set of guidelines for work with recombinant DNA, then a novel technology of unexplored potential. These guidelines, keyed to the risk of exposure to genetically modified organisms, have prevented any untoward events, reassured the public, and allowed the rapid and efficient progress of academic and commercial applications of these technolo- gies. The recombinant DNA guidelines were established to prevent un- intended creation of harmful recombinant organisms. But now the na- tion faces a different problem: the intentional use of biotechnology for destructive purposes. This challenge must engage the entire community of biologists nationally and internationally. In a joint statement issued on November 8, 2002, and printed in the journal Science, the presidents of the U.S. National Academy of Sciences and the U.K. Royal Society called on scientists to assist their governments in combating the threat of bioterrorism: "Today, researchers in the biological sciences again need to take responsibility for helping to prevent the potential misuses of their work, while being careful to preserve the vitality of their disciplines as required to contribute to human welfare." To consider ways to balance national security and scientific openness, the Committee had six meetings held in Washington, D.C. between April 1, 2002 and lanuary 29, 2003. Representatives from the National Institutes of Health, the Executive Office of the President, governmental and non- governmental technical and policy experts, and educators and private consultants briefed the Committee. The Committee also reviewed infor- mation available from the open literature as well as new materials pre- pared by experts (see Appendix C).

PREFACE During the course of our deliberations, Committee members recom- mended that scientific, policymaking, and intelligence communities be brought together to focus on the challenges raised by advances in biotech- nology. To this end the National Academies and the Center for Strategic and International Studies convened a one-day meeting on "Scientific Openness and National Security" in Washington, D.C., on lanuary 9, 2003. This meeting emphasized the importance of a continuing dialogue be- tween the life sciences and the intelligence communities both nationally and internationally. It is our hope that this report provides the basis for this dialogue. The Committee wishes to express its sincere appreciation to the de- voted project staff. As study director, Eileen Choffnes ensured the success of this project through her expertise, dedication, and creativity. This study would not have been possible without Dr. Choffnes' oversight and coor- dination of the work of the Committee and her insightful editing of the report. Amy Giamis was outstanding in her great finesse in the organiza- tional work of the Committee, and her numerous contributions to sup- porting the research and editing of the report. Finally, the Committee wishes to express its appreciation to I° Husbands, who brought to our deliberations considerable insights from her experience as Director of the NAS Committee on International Security and Arms Control. Through- out the study we were encouraged by the support of NAS President Bruce Alberts. I want to express my personal thanks to the individual members of the Committee for the dedication and energy with which they tackled this difficult problem. The report would not have been possible without the perspectives of these experts, who represented their diverse disciplines so eloquently. Gerald R. Fink Chair

Acknowledgments This report has been reviewed in draft form by individuals chosen for their diverse perspectives and technical expertise, in accordance with pro- cedures approved by the NRC's Report Review Committee. The purpose of this independent review is to provide candid and critical comments that will assist the institution in making its published report as sound as possible and to ensure that the report meets institutional standards for objectivity, evidence, and responsiveness to the study charge. The review comments and draft manuscript remain confidential to protect the integ- rity of the deliberative process. We wish to thank the following individuals for their review of this report: Kenneth Berns, Mount Sinai Medical Center; lames Cook, Wash- ington State University; Malcolm Dando, University of Bradford; Catherine DeAngelis, Journal of the American Medical Association; Stanley Falkow, Stanford University; Claire Fraser, The Institute for Genomic Re- search; Michael Friedman, City of Hope; Robert Haselkorn, University of Chicago; Michael McGeary, McGeary and Smith; Michael Moodie, Chemi- cal and Biological Arms Control Institute; Harley Moon, Iowa State Uni- versity; Stephen S. Morse, Columbia University; lerome Schultz, Univer- sity of Pittsburgh; Jonathan Tucker, Center for Nonproliferation Studies, Monterey Institute of International Studies; and Mark Wheelis, Univer- sity of California, Davis. Although the reviewers listed above have provided many construc- tive comments and suggestions, they were not asked to endorse the con- clusions or recommendations, nor did they see the final draft of the report before its release. The review of this report was overseen by Gilbert Omenn, University of Michigan Medical School, and R. Stephen Berry, University of Chicago. Appointed by the National Research Council, they Xl

X11 ACKNOWLEDGMENTS were responsible for making certain that an independent examination of this report was carried out in accordance with institutional procedures and that all review comments were carefully considered. Responsibility for the final content of this report rests entirely with the authoring com- mittee and the institution.

Contents Executive Summary 1 Introduction The Life Sciences Today, 16 The "Dual Use" Dilemma, 18 A Brief History of Modern Biological Warfare, 19 U.S. Policy and the Creation of the Biological and Toxin Weapons Convention, 21 The New Threat, 22 Recent Examples of "Contentious Research" in the Life Sciences, 24 The Response of the Life Sciences Community to Previous Challenges, 29 Committee Charge and Process, 30 Annex: Biological Warfare in History, 33 2 The Evolving Regulatory Environment for Life Sciences Research in the 21st Century Introduction, 41 The U.S. Regulatory Environment, 44 Framework for Implementation of the NIH Guidelines for rDNA Research, 46 Types of Experiments That Require IBC, RAC and NIH Director Review, 49 Physical and Biological Containment Strategies for NIH-Funded rDNA Research Activities, 49 . . . x''' 1 15 41

Next: Executive Summary »
Biotechnology Research in an Age of Terrorism Get This Book
× 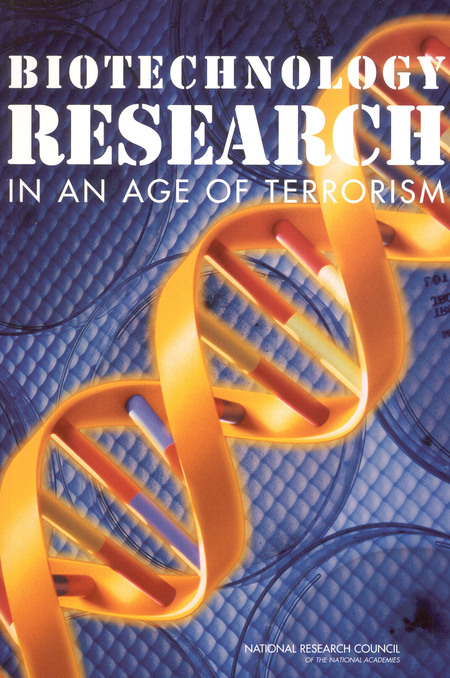 In recent years much has happened to justify an examination of biological research in light of national security concerns. The destructive application of biotechnology research includes activities such as spreading common pathogens or transforming them into even more lethal forms. Policymakers and the scientific community at large must put forth a vigorous and immediate response to this challenge. This new book by the National Research Council recommends that the government expand existing regulations and rely on self-governance by scientists rather than adopt intrusive new policies. One key recommendation of the report is that the government should not attempt to regulate scientific publishing but should trust scientists and journals to screen their papers for security risks, a task some journals have already taken up. With biological information and tools widely distributed, regulating only U.S. researchers would have little effect. A new International Forum on Biosecurity should encourage the adoption of similar measures around the world. Seven types of risky studies would require approval by the Institutional Biosafety Committees that already oversee recombinant DNA research at some 400 U.S. institutions. These “experiments of concern” include making an infectious agent more lethal and rendering vaccines powerless.