Endangered and Threatened Fishes in the Klamath River Basin: Causes of Decline and Strategies for Recovery (2004)

Visit NAP.edu/10766 to get more information about this book, to buy it in print, or to download it as a free PDF.
Page i Share Cite
Suggested Citation:"Front Matter." National Research Council. 2004. Endangered and Threatened Fishes in the Klamath River Basin: Causes of Decline and Strategies for Recovery. Washington, DC: The National Academies Press. doi: 10.17226/10838.
×

THE NATIONAL ACADEMIES PRESS 500 Fifth Street, N.W. Washington, DC 20001 NOTICE: The project that is the subject of this report was approved by the Govern- ing Board of the National Research Council, whose members are drawn from the councils of the National Academy of Sciences, the National Academy of Engineer- ing, and the Institute of Medicine. The members of the committee responsible for the report were chosen for their special competences and with regard for appropriate balance. This project was supported by Grant 98210-1-G092 between the National Academy of Sciences and the U.S. Department of the Interior and the U.S. Depart- ment of Commerce. Any opinions, findings, conclusions, or recommendations ex- pressed in this publication are those of the authors and do not necessarily reflect the view of the organizations or agencies that provided support for this project. Library of Congress Cataloging-in-Publication Data Endangered and threatened fishes in the I(lamath River Basin: causes of decline and . strategies: -or recovery. p. cm. Includes bibliographical references (p. ). IS8N 0-309-09097-0 (hardcover) IS8N 0-309-52808-9 (pdf) 1. Rare fishes I(lamath River Watershed (Or. and Calif.) 2. Fishes Conserva- tion I(lamath River Watershed (Or. and Calif.) I. National Academies Press (U.S.~. QL617.73.U6E53 2004 333.95'68'09795 dc22 2004001241 Cover illustration by Janice C. Fong, University of California, Davis; copyright 2004. Additional copies of this report are available from: The National Academies Press 500 Fifth Street, NW Box 285 Washington, DC 20055 800-624-6242 202-334-3313 (in the Washington metropolitan area) http://www.nap.edu Copyright 2004 by the National Academy of Sciences. All rights reserved. Printed in the United States of America.

Acknowledgment of Review Participants This report has been reviewed in draft form by persons chosen for their diverse perspectives and technical expertise in accordance with procedures approved by the National Research Council Report Review Committee. The purpose of this independent review is to provide candid and critical com- ments that will assist the institution in making its published report as sound as possible and to ensure that the report meets institutional standards of objectivity, evidence, and responsiveness to the study charge. The review comments and draft manuscript remain confidential to protect the integrity of the deliberative process. The committee and the NRC thank the follow- ing for their review of this report: Don Chapman, consultant, McCall, Idaho leff Curtis, Trout Unlimited I(urt Fausch, Colorado State University Wilford Gardner, University of California, Berkeley Stanley Gregory, Oregon State University Roger I(asperson, Stockholm Environment Institute lames Mitchell, University of Wisconsin Mark Stern, The Nature Conservancy David Vogel, Natural Resource Scientists, Inc. Robert Wetzel, University of North Carolina, Chapel Hill M. Gordon Wolman, lohns Hopkins University Although the reviewers listed above have provided many constructive comments and suggestions, they were not asked to endorse the conclusions . . . x'''

xlv ACKNOWLEDGMENT OF REVIEW PARTICIPANTS or recommendations, nor clicI they see the final ciraft of the report before its release. The review of this report was overseen by Paul Risser, Oregon State University, ancI Stephen Berry, University of Chicago. Appointed by the Na- tional Research Council, they were responsible for making certain that an inclepenclent examination of this report was carried out in accordance with institutional procedures anti that all review comments were carefully con- siclerecI. Responsibility for the final content of this report rests entirely with the committee ancI the National Research Council.

Preface The fecleral EnciangerecT Species Act (ESA) of the United States has the acimirable goal of minimizing extinction rates through regulations ancT ac- tions that are intenclecT to produce recovery of species that are in critical clecline. For any given species listecT uncler the act, agencies implementing the ESA must choose from an immense array of possibilities the ones most likely to leacT to recovery, ancT in cloing so they must forego the luxury of an extenclecT interval of monitoring or experimentation. Remedies for the recovery of species often have harmful or at least frus- trating effects on people ancT institutions. In such instances, the affected parties often are especially cTissatisfiecT with the implementation of remedies that are not absolutely secure scientifically. But the ESA cloes not allow clelay, which wouicT clefeat its purpose. Thus, some of the remedies pre- scribecT by agencies ultimately will prove ineffective ancT may cause eco- nomic or social disruption without any tangible benefit to listecT species. The National Research Council's Committee on EnciangerecT ancT Threatened Fishes in the I(lamath River Basin clears in its final report with three I(lamath basin fish species listecT uncler the fecleral ESA. The com- mittee's work is broacT in that it encompasses the entire actual or potential range of those species in the I(lamath basin, regarcTless of the boundaries set by ownership or management, ancT with all the potential environmental changes that couicT suppress or promote the welfare of the species. The com- mittee, in response to its charge, has given particular attention to evaluation of the certainty unclerlying specific kincTs of remedies that might leacT to the recovery of species. The issues that the committee has clealt with are specific xv

xv! PREFACE to the basin, but the I(lamath basin presents in microcosm most of the prob- lems that are generally iclentifiecI with implementation of the ESA. Espe- cially prominent in the I(lamath basin is controversy over the extent to which remedies that have uncertain outcomes shouicI be pursued even though they are economically or socially painful. One issue especially well highlightecI by the I(lamath basin is the rela- tive weight that shouicI be given to professional judgment as opposed to clirect empirical evidence that appears to be contradictory to that judgment. Whereas professional judgment is essential for successful ESA implementa- tions where site-specific information is absent, its use is more problematic when initial judgments fail empirical tests. Reversal of an initial judgment may seem to be an abandonment of cluty or principle, but it is unrealistic to expect that all initial judgments will be provecI scientifically souncI. By rais- ing this issue in specific terms in its interim report, the committee has gener- atecI consiclerable controversy in the I(lamath basin. The committee believes, however, that a rational anti consistent resolution of the issue works toward the long-term stability anti effectiveness of the ESA. The committee's final report gives a more cletailecI view of the committee's approach. The committee owes a great clebt of gratitude to the National Research Council staff members who have guiclecI it through the production of the final report. Suzanne van Drunick, project director, has been especially criti- cal to the success of the committee; DavicI Policansky, lames Reisa, anti Bryan Shipley also helpecI the committee in numerous ways; Norman Grossblatt, Mirsacia I(aralic-Loncarevic, anti I(elly Clark helpecI with the many cletails that macle the report reacly for publication. The committee is also appreciative of lames MacMahon anti other boarcI members for their oversight of this study. The committee is grateful to Leslie Northcott of the University of Coloraclo for helping to produce the manuscript of the report anti to Marylee Murphy anti Rebecca Anthony of the University of Colo- raclo for their work on figures anti tables. The committee benefited immensely from the help anti advice of scien- tists anti administrators who have clealt with environmental issues in the I(lamath basin anti to contributions from the citizens, organizations, anti tribes working anti living in the basin. The committee's highest hope is that its work will be a contribution to the long-term general welfare of everyone who resicles in, visits, or cares about the I(lamath basin. The National Research Council process for producing the report in- volves extensive reliance on external reviewers. The committee thanks the reviewers of its final report for their thoughtful contributions. William M. Lewis, tr., Chair Committee on EnciangerecI anti Threatened Fishes in the I(lamath River Basin

Next: Summary »
Endangered and Threatened Fishes in the Klamath River Basin: Causes of Decline and Strategies for Recovery Get This Book
× 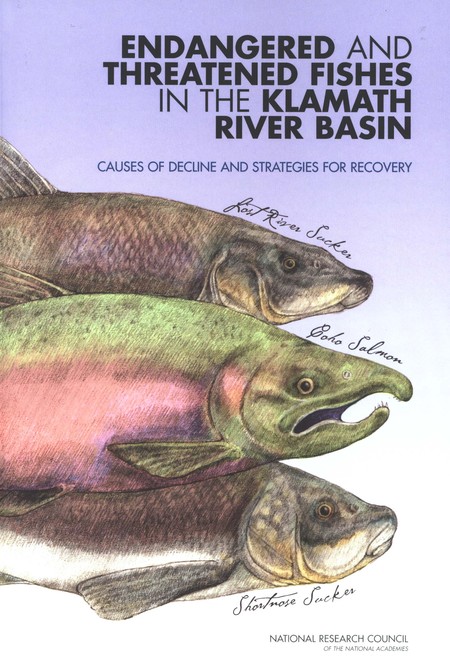 In 1988 the U.S. Fish and Wildlife Service listed two endemic fishes of the upper Klamath River basin of Oregon and California, the sucker and the Lost River sucker, as endangered under the federal Endangered Species Act (ESA). In 1997, the National Marine Fisheries Service added the Southern Oregon Northern coastal California (SONCC) coho salmon as a threatened species to the list. The leading factors attributed to the decline of these species were overfishing, blockage of migration, entrainment by water management structures, habitat degradation, nonnative species, and poor water quality.

Endangered and Threatened Fishes of the Klamath River Basin addresses the scientific aspects related to the continued survival of coho salmon and shortnose and Lost River suckers in the Klamath River. The book further examines and identifies gaps in the knowledge and scientific information needed for recovery of the listed species and proves an assessment of scientific considerations relevant to strategies for promoting the recovery of those species.