Advancing the Federal Research Agenda on Violence Against Women (2004)

Visit NAP.edu/10766 to get more information about this book, to buy it in print, or to download it as a free PDF.
Page i Share Cite
Suggested Citation:"Front Matter." National Research Council. 2004. Advancing the Federal Research Agenda on Violence Against Women. Washington, DC: The National Academies Press. doi: 10.17226/10849.
×

AD\~NCING THE FEDERAL RESEARCH AGENDA ON ~A~8 - - ~. AGAINST WOMEN Steering Committee for the Workshop on Issues in Research on Violence Against Women Candace Kruttschnitt, Brenda L. McLaughlin, and Carol V. Petrie, editors Committee on Law and Justice Division of Behavioral and Social Sciences and Education NATIONAL RESEARCH COUNCIL OF THE NATIONAL ACADEMIES THE NATIONAL ACADEMIES PRESS Washington, D.C. www.nap.edu

Preface Knowledge from research on the violent victimization of women has advanced significantly during the past decade. As a result of improved survey research in the fields of criminal justice and pub- lic health, we now have a better grasp of the scope and nature of violence against women, especially intimate-partner violence and sexual assault. Much remains to be done, however, especially to increase our knowledge of the causes and consequences of serious assaults, including sexual as- saults, and homicides against women. The nation now spends hundreds of millions of dollars to improve the safety of women, especially at home, and yet more than half of all female homicide victims are killed by an intimate partner, other family member, or acquaintance. Although, as with homicide in general, the rates of domestic homicide for women have de- creased, they have declined at a slower rate than those for men. In addi- tion, the violent victimization of women by strangers and in other settings and circumstances has been largely neglected in the research literature. This report expands on the work of an earlier National Research Council (NRC) panel whose report, Understanding Violence Against Women, was published in 1996. While some of the research recommended in that report has been funded and carried out, important gaps remain. For ex- ample, prevalence and incidence data are still inadequate to measure trends or to reveal whether the interventions being designed are in fact working to improve the overall safety of women in society. It is hoped that the recommendations in the present report will begin to improve this situation. This report is based on the presentations and deliberations of a work- . . V11

vIll PREFACE shop convened by the NRC in January 2002 to develop a detailed research agenda on violence against women. The chapters in the report draw on the eight papers commissioned for the workshop, on the comments made by a panel of distinguished commentators, and on the discussion by work- shop participants. Many people made generous contributions to the workshop's success. We thank the authors of the papers presented: Laura Dugan and Robert Apel, University of Maryland; Jacquelyn Campbell and Jennifer Manganello, Johns Hopkins University; Sandra Martin and Beth Moracco, University of North Carolina; fuanjo Medina, University of Manchester; Deanna Wilkinson and Susan Hamerschlag, Temple Univer- sity; Kirk Williams and Elizabeth Conniff, University of California, River- side; Christopher Maxwell and Lori Post, Michigan State University; Amy Holtzworth-Munroe and Jeffrey Meehan, Indiana University, Bloomington; and Daniel Saunders and Richard Hamill, University of Michigan. We also thank the scholars who prepared comments on each of the papers: Ann Coker, University of South Carolina; Colin Loftin, Uni- versity at Albany; Ross MacMillan, University of Minnesota; Michael Benson, University of Cincinnati; Robert F. Meter, University of Nebraska; Greg Pogarsky, University at Albany; Alissa Worden, University at A1- bany; John Firman, International Association of Chiefs of Police; Julie Homey, University at Albany; and Marty Friday, Women's Center and Shelter of Greater Pittsburgh. We thank as well the scholars who presented on topics not covered by the papers: David Ford, Indiana University; Adele Harrell, Urban Institute; Patricia Munhall, University of South Carolina; Beth Richie, University of Illinois, Chicago; Carolyn Rebecca Block, Illinois Criminal Justice Information Authority; Myrna Dawson, University of Western Ontario; and Bill McCarthy, University of Califor- nia, Davis. We also thank Kirsten Sampson Snyder, Reports Officer, Rona Briere, editor, and Yvonne Wise for managing the production process. This report has been reviewed in draft form by individuals chosen for their diverse perspectives and technical expertise, in accordance with pro- cedures approved by the NRC's Report Review Committee. The purpose of this independent review is to provide candid and critical comments that will assist the institution in making its published report as sound as possible and to ensure that the report meets institutional standards for objectivity, evidence, and responsiveness to the study charge. The review comments and draft manuscript remain confidential to protect the integ- rity of the deliberative process. We wish to thank the following individu- als for their review of this report: Rosemary Gartner, Centre of Criminol- ogy, University of Toronto; Karen Heimer, Department of Sociology, University of Iowa; Julie Homey, School of Criminal Justice, University at Albany, State University of New York; Catherine Stayton, Department of

PREFACE Health and Nutrition Sciences, Brooklyn College, City University of New York; and Ralph Brecken Taylor, Department of Criminal Justice, Temple University. Although the reviewers listed above provided many constructive comments and suggestions, they were not asked to endorse the report's conclusions or recommendations, nor did they see the final draft of the report before its release. The review of this report was overseen by Rich- ard B. Rosenfeld, Department of Criminology and Criminal Justice, Uni- versity of Missouri-St. Louis. Appointed by the NRC, he was responsible for making certain that an independent examination of this report was carried out in accordance with institutional procedures and that all re- view comments were carefully considered. Responsibility for the final content of this report rests entirely with the authoring committee and the institution. Candace Kruttschnitt Chair

Next: Executive Summary »
Advancing the Federal Research Agenda on Violence Against Women Get This Book
× 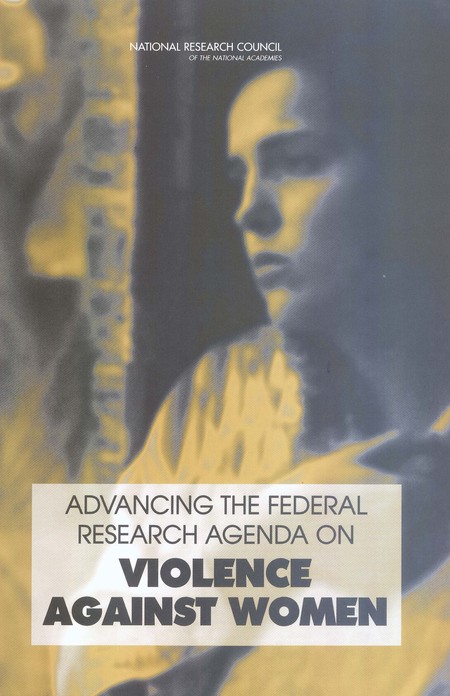 This report expands on the work of an earlier National Research Council panel whose report, Understanding Violence Against Women, was published in 1996. The report is based on the presentations and deliberations of a workshop convened in January 2002, at the request of Congress, to develop a detailed research agenda on violence against women. While some of the research recommendations in the earlier report have been funded and carried out, the workshop demonstrated that important gaps remain. For example, prevalence and incidence data are still inadequate to measure trends or to reveal whether interventions being designed under federal programs are, in fact, working. Among its primary recommendations, the committee underscored the importance of strengthening the data and research infrastructure in this area, especially the need for better prevalence data and longitudinal data to determine the causes of violent victimization of women and the impact of interventions.