Visit NAP.edu/10766 to get more information about this book, to buy it in print, or to download it as a free PDF.
Page i Share Cite
Suggested Citation:"Front Matter." National Research Council. 2003. Assessing Research-Doctorate Programs: A Methodology Study. Washington, DC: The National Academies Press. doi: 10.17226/10859.
×

THE NATIONAL ACADEMIES PRESS 500 Fifth Street, N.W. Washington, DC 20001 NOTICE: The project that is the subject of this report was approved by the Governing Board of the National Research Council, whose members are drawn from the councils of the National Academy of Sciences, the National Academy of Engineering, and the Institute of Medicine. The members of the committee responsible for the report were chosen for their special competences and with regard for appropriate balance. This study was supported by the National Institutes of Health Award# N01-OD-4-2139, Task Order No. 107, received support from the evaluation set-aside Section 513, Public Health Act; the Na- tional Science Foundation Award# DGE-0125255; the Alfred P. Sloan Foundation Grant No.2001- 6-10, and the United States Department of Agriculture Award# 43-3AEM-1-80054 USDA-4454. Any opinions, findings, conclusions, or recommendations expressed in this publication are those of the authoress and do not necessarily reflect the views of the organizations or agencies that provided support for the project. International Standard Book Number 0-309-09058-X (Book) International Standard Book Number 0-309-52708-2 (PDF) Library of Congress Control Number 2003113741 Additional copies of this report are available from the National Academies Press, 500 Fifth Street, N.W., Lockbox 285, Washington, DC 20055; (800) 624-6242 or (202) 334-3313 (in the Washing- ton metropolitan area); Internet, http://www.nap.edu Copyright 2003 by the National Academy of Sciences. All rights reserved. Printed in the United States of America

Acknowledgments This study has benefited enormously from the advice of countless students, faculty, administrators, and researchers in government and industry who have sent us e-mail, espe- cially concerning the taxonomy and our questionnaires. The Council of Graduate Schools, the National Association of State Universities and Land Grant Colleges, the National Academy of Sciences, the GREAT Group of the American Association of Medical Colleges, and the Association of American Universities all invited us to their meetings when the study was in its early stages and helped us to formulate the major issues the Committee needed to address. Nancy Diamond, Ron Ehrenberg, and the late Hugh Graham also were helpful to us in the early stages. We owe an immense debt to our pilot site universities and their graduate deans, institutional researchers, and faculty who helped us differentiate between the desirable and the feasible. These are: Florida State University, Michigan State University, Rensselaer Polytechnic Institute, The University of California-San Francisco, The University of Maryland, The University of Southern California, The University of Wisconsin-Milwaukee, and Yale University. We are grateful to the National Research Council Staff: Herman Alvarado, Teresa Blair, Edvin Hernandez, Evelyn Simeon, and Elizabeth Scott. They made our meetings run smoothly, helped produce the report, and amassed the data without which the Committee would not have been able to do its work. Irene Renda at Princeton University and Jeanette Gilbert at the University of Cambridge also assisted these efforts by ably supporting the Committee's Chair. This report has been reviewed in draft form by individuals chosen for their diverse perspectives and technical expertise, in accordance with procedures approved by the NRC's Report Review Committee. The purpose of this independent review is to provide candid and critical comments that will assist the institution in making its published report as sound as possible and to ensure that the report meets institutional . . via standards for objectivity, evidence, and responsiveness to the study charge. The review comments and draft manu- script remain confidential to protect the integrity of the deliberative process. We wish to thank the following individuals for their review of this report: Leslie Berlowitz, American Academy of Arts and Sciences; Terrance Cooper, University of Tennessee; Nancy Diamond, Pennsylvania State University; Edward Hiler, Texas A&M University; Louis Lanzerotti, Bell Laboratories, Lucent Technologies; Edward Lazowska, University of Washington; Brendan Maher, Harvard Uni- versity; Risa Palm, University of North Carolina-Chapel Hill; C. Kumar Patel, Pranalytica, Inc.; Gerald Sonnenfeld, Morehouse School of Medicine; Stephen Stigler, University of Chicago; Kathleen Taylor (Retired), General Motors Corporation; E. Garrison Walters, Ohio Board of Regents; Pauline Yu, American Council of Learned Societies; and James Zuiches, Washington State University. Although the reviewers listed above have provided many constructive comments and suggestions, they were not asked to endorse the conclusions or recommendations, nor did they see the final draft of the report before its release. The review of this report was overseen by Ronald Ehrenberg, Cornell University, and Lyle Jones, University of North Carolina- Chapel Hill. Appointed by the National Research Council, they were responsible for making certain that an indepen- dent examination of this report was carried out in accordance with institutional procedures and that all review comments were carefully considered. Responsibility for the final content of this report rests entirely with the authoring com- mittee and the institution. Finally, we wish to thank our funders: the National Insti- tutes of Health, the National Science Foundation, the Alfred P. Sloan Foundation, and the United States Department of Agriculture. Without their support, both financial and con- ceptual, this report would not have been written.

Next: Executive Summary »
Assessing Research-Doctorate Programs: A Methodology Study Get This Book
× 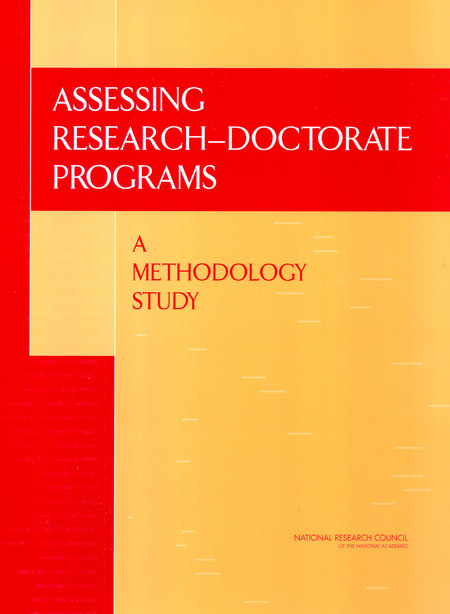 How should we assess and present information about the quality of research-doctorate programs? In recommending that the 1995 NRC rankings in Assessing the Quality of Research-Doctorate Programs: Continuity and Change be updated as soon as possible, this study presents an improved approach to doctoral program assessment which will be useful to administrators, faculty, and others with an interest in improving the education of Ph.D.s in the United States. It reviews the methodology of the 1995 NRC rankings and recommends changes, including the collection of new data about Ph.D. students, additional data about faculty, and new techniques to present data on the qualitative assessment of doctoral program reputation. It also recommends revision of the taxonomy of fields from that used in the 1995 rankings.