Conflict and Reconstruction in Multiethnic Societies: Proceedings of a Russian-American Workshop (2003)

Visit NAP.edu/10766 to get more information about this book, to buy it in print, or to download it as a free PDF.
Page i Share Cite
Suggested Citation:"Front Matter." National Research Council. 2003. Conflict and Reconstruction in Multiethnic Societies: Proceedings of a Russian-American Workshop. Washington, DC: The National Academies Press. doi: 10.17226/10879.
×

THE NATIONAL ACADEMIES PRESS · 500 Fifth Street, N.W. · Washington, DC 20001 NOTICE: The project that is the subject of this report was approved by the Gov- erning Board of the National Research Council, whose members are drawn from the councils of the National Academy of Sciences, the National Academy of Engi- neering, and the Institute of Medicine. The members of the committee responsible for the report were chosen for their special competences and with regard for appropriate balance. This study was supported in part by Grant No. 000-63-925-GSS between the Na- tional Academy of Sciences and the John D. and Catherine T. MacArthur Founda- tion. Any opinions, findings, conclusions, or recommendations expressed in this publication are those of the authoress and do not necessarily reflect the views of the organizations or agencies that provided support for the project. International Standard Book Number 0-309-08939-5 (Book) International Standard Book Number 0-309-51687-0 (PDF) A limited number of copies of this report are available from: Office for Central Europe and Eurasia Policy and Global Affairs The National Academies, Keck Center 500 Fifth Street, N.W. Washington, DC 20001 202-334-2644 Additional copies of this report are available from The National Academies Press 500 Fifth Street, N.W., Lockbox 285 Washington, DC 20055 (800) 624-6242 or (202) 334-3313 (in the Washington metropolitan area) Internet, http://www.nap.edu Copyright 2003 by the National Academy of Sciences. All rights reserved. Printed in the United States of America

Preface n February 2000 the Russian Academy of Sciences (RAS) proposed to the National Academy of Sciences (NAS) that the academies initiate a joint project on conflicts in multiethnic societies. The RAS suggested that such a project take into account lessons learned in Chechnya when addressing ethnic conflicts in other areas of the former Soviet Union. Western specialists with broad international experience in addressing eth- nic relations who were consulted believed they could contribute impor- tant perspectives that would complement the extensive expertise of Rus- sian colleagues in addressing problems in the former Soviet Union. The NAS Council thereupon agreed that an interacademy project would be of mutual interest. When the project was initiated 18 months before the events of Sep- tember 11, 2001, western scholars did not view violence in Chechnya or other ethnic enclaves of Russia as manifestations of or responses to terror- ism despite the use of the term by the Russian authorities to characterize the situation in Chechnya. It was evident that there existed a wide diver- sity of situations prone to possible conflict within the territory of the former Soviet Union. Beyond descriptive case studies of individual in- stances, however, little analysis had been devoted to identifying causal relationships or prescriptions for remediation that could be drawn from the divergent events and outcomes as a guide to Russian policy. A sys- tematization of much international as well as Russian experience with state-level responses to the threat of conflict, together with analyses of successes or failures of reconstruction programs, would clearly be a step . . V11

vIll PREFACE forward. A deepened theoretical understanding should also result. This was an opportunity for an international collaborative effort in the social sciences of a new and unusually intensive kind, building on expanded possibilities for Russian-American cooperation after the end of the Cold War. It was only dimly foreseen that there would soon be significant new international dimensions to manifestations of violence such as those seen within the former Soviet Union. Consistent with this understanding, by mid-2000 the academies had begun planning for an international symposium on ethnic conflict to be hosted by the RAS in Moscow in the fall. The purpose of the symposium was to survey experiences in different geographical settings concerning ethnic conflicts of particular relevance to problems in Russia and in other former Soviet republics. In preparation for the symposium, a small team of American special- ists visited Rostov-on-Don where they discussed ethnic relations with officials and specialists who came to Rostov from a number of republics and oblasts in the North Caucasus, including Chechnya. These consulta- tions provided an opportunity for local specialists to have direct input into the project in general and the symposium in particular. In addition, the American specialists met on several occasions with officials and schol- ars in Moscow in designing the symposium. The symposium was held in December 2000 with 12 American and more than 50 Russian participants in attendance, and several contributions from that symposium are in- cluded as appendixes to this volume. Plans for a next phase of project activities took shape during the spring of 2001, and in tune 2001 an interacademy workshop was scheduled for December. The terrorist attacks on the World Trade Center and the Penta- gon three months later clearly signaled a radical departure in world pat- terns of multiethnic violence that might be expected in the future. But the project's basic objective of systematizing existing knowledge of prior cases and developing a more adequate theoretical base remained a valid start- ing point for coming to grips with the new, still virtually unknown pat- terns that might emerge. Three working groups were established, on the topics of collective violence; culture, identity, and conflict; and comparative study of identity conflict. The task was to develop lists of research priorities in the three areas. The members of these U.S.-Russian working groups initially com- municated among themselves by e-mail. Also in preparation for the workshop, a small team of American spe- cialists traveled to Moscow and Nizhny Novgorod in November 2001. In Moscow they consulted with members of the Duma as well as with scien- tific colleagues. In Nizhny Novgorod they held discussions with special- ists from republics and oblasts throughout the Volga region on the state of

PREFACE ethnic relations and research needs. They also met with Sergey V. Kirienko, the representative of President Putin for the region. His deputy, Vladimir Yu. Zorin, who became minister of nationalities in December 2001, was the host of the visit and played an active role in the project both in Nizhny Novgorod and later in Washington, D.C. In December 2001 members of the three working groups met in Washington, D.C., to com- plete their deliberations and to present their findings at the workshop. There were interrelationships among the topics assigned to the working groups, and therefore there is some redundancy in the working group reports. While the working groups were in session, three Russian policy officials who were part of the Russian delegation discussed broader policy concerns with U.S. government officials and local scholars interested in ethnic conflict. These proceedings present an overview of the discussions during the workshop, followed by the reports of the working groups, background, and papers developed by working group members. In addition, several general papers on ethnic relations in Russia are included. The three working groups were not appointed by the National Re- search Council or the National Academies. Therefore, their findings re- flect the views of the individuals comprising the working groups, not necessarily those of this institution or the appointed study committee. All of their individually authored papers were presented or distributed at the workshop and likewise reflect the views of the individual authors based on the state of affairs in December 2001. The appendixes present significant papers considered in Rostov and Nizhny Novgorod, presentations at the Moscow symposium of special interest, and background documents developed by Russian specialists during the course of the project. The appendixes help provide the context within which the workshop in Washington was held. ACKNOWLEDGMENTS Many scholars and officials in Russia and the United States partici- pated in this activity. They are identified in the appendixes to the pro- ceedings, and their contributions are greatly appreciated. Valery A. Tish- kov, Director of the Institute of Ethnology and Anthropology in Moscow, deserves particular recognition for his continuous efforts in ensuring that the activities would be both professionally rewarding for the participants and useful for government officials. Special appreciation is extended to the Council of the National Acad- emy of Sciences and the John D. and Catherine T. MacArthur Foundation, which provided the funding for this initial phase of an important inter- academy project.

x PREFACE The papers in these proceedings have been reviewed in draft form by individuals chosen for their expertise, in accordance with the procedures approved by the NRC's Report Review Committee. The purpose of the independent review is to provide candid and critical comments that will assist the authors and the institution in making the papers as sound as possible and to ensure that the proceedings meet institutional standards for quality. The review comments and draft manuscript remain confiden- tial. In addition to the members of the NRC Committee, we wish to thank the following individuals for their review of selected papers in these pro- ceedings: Rogers Brubaker, University of California, Los Angeles; Chris- tian A. Davenport, University of Maryland; George Demko, Dartmouth College; Zvi Y. Gitelman, University of Michigan; Alexander I. Motyl, Rutgers University; and Uri Ra'Anan, Boston University. Although the reviewers listed above have provided many constructive comments and suggestions, they were not asked to endorse the content of the individual papers, nor did they see the final draft of the proceedings before its re- lease. We wish to thank Kelly Robbins, Rita Kit, and Rita S. Guenther for their translations of the Russian language papers into English. Special thanks also to Ian Dee Summers, Kelly Robbins, and A. Chelsea Sharber for their editing of the proceedings. Robert McC. Adams Chair, NRC Committee on Conflict and Reconstruction in Multiethnic Societies Glenn E. Schweitzer Director, Office for Central Europe and Eurasia, NRC

CONTENTS Appendixes A Selected Documents from the Interacademy Symposium in Moscow, December 18-20, 2000 A-1 Postconflict Chechnya: Analysis of the Situation and Reconstruction Problems (Political Aspects) Dzhabrail Gakoev A-2 Ethnic and National Conflicts in the Age of Globalization Anatoly M. Khazanov A-3 Transition and Conflict in Multiethnic Postsocialist Societies: The Case of Bosnia-Herzegovina Tone Bringa A-4 States in Transition and the Challenge of Ethnic Conflict: Russian and International Perspectives B Documents Concerning the Southern Federal District (North Caucasus) B-1 Chechnya from Conflict to Stability: Problems of Postconflict Reconstruction B-2 Officials and Specialists from the North Caucasus Consulted in Rostov-on-Don, October 10-11, 2000 Documents Concerning the Volga Federal District C-1 Program for Strengthening Ethnoreligious Accord in the Volga Federal District C-2 Officials and Specialists Concerned with the Volga Federal District Consulted in Moscow and Nizhny Novgorod, October 28-November 3, 2001 D Other Documents D-1 The Dynamics of Factors of Ethnopolitical Conflicts in Post-Soviet States Valery A. Tishkov D-2 Other Russian Officials and Specialists Consulted During the Project D-3 Chronology of Events Throughout the Project . . . X111 145 162 168 182 189 195 201 209 215 218 220

Next: Priorities for Research on Conflict in Multiethnic Countries »
Conflict and Reconstruction in Multiethnic Societies: Proceedings of a Russian-American Workshop Get This Book
× 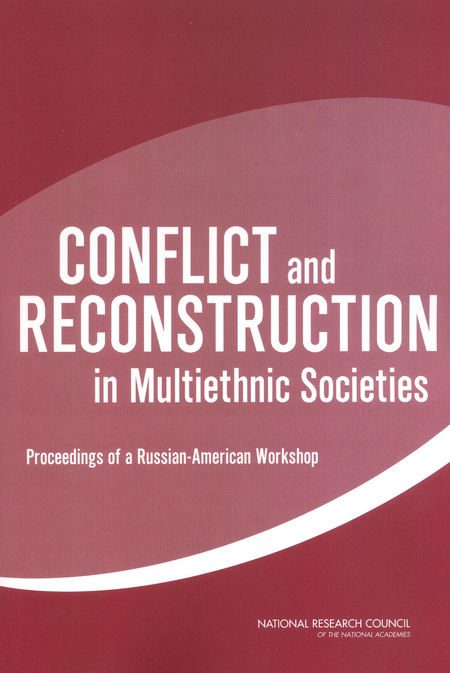 This report is the proceedings of a December 2001 international symposium in Washington, DC organized by the National Academies and the Russian Academy of Sciences. The symposium addressed (1) characteristics of peaceful management of tensions in multiethnic societies, particularly in Russia; (2) policies that have contributed to violence in such societies; (3) steps toward reconciliation; and (4) post-conflict reconstruction.