Issues and Opportunities Regarding the U.S. Space Program: A Summary Report of a Workshop on National Space Policy (2004)

Visit NAP.edu/10766 to get more information about this book, to buy it in print, or to download it as a free PDF.
Page i Share Cite
Suggested Citation:"Front Matter." National Research Council. 2004. Issues and Opportunities Regarding the U.S. Space Program: A Summary Report of a Workshop on National Space Policy. Washington, DC: The National Academies Press. doi: 10.17226/10899.
×

Preface The NASA Authorization Act of 1958 (anct its amendments) set very broact objectives for the U.S. civil space program. They include, inter aTia, expansion of human knowledge of the Earth and space, development and operation of space vehicles, and preservation of U.S. leadership in aeronautical and space science and technology. In May 1961, President Kennedy set the nation on an explicit course of human exploration when he proposed "achieving the goal, before this clecacle is out, of lancting a man on the moon and returning him safely to the earth." Kennecly's decision was very much influenced by desires to surpass the Soviet Union in space achievements. Following the Apollo program the roles and direction of human spaceflight often have been controversial and uncertain. Many blue-ribbon panels have acictressect the issue, sometimes from the limited perspective of what should be the nation's goals in human spaceflight and on other occasions from a broacler perspective that examined the space program in its entirety. The aftermath of the shuttle Columbia tragedy in February 2003 initiated a growing public debate over the purpose and future of the U.S. civil space program. At its 141st meeting, the Space Studies Board (SSB), in collaboration with the Aeronautics and Space Engineering Board (ASEB), organized a workshop for the purpose of contributing their collective experience and expertise to this debate, as well as to encourage a continuing broact national discussion about the future direction of the U.S. civil space program. The workshop took place November 12 and 13, 2003, at the Arnold and Mabel Beckman Center of the National Academies in Irvine, California. Including the participating members of the SSB and ASEB, a total of 55 invitees engaged in a series of five pane! discussions and open general discussions over the course of the ciay-ancl-a-half event. The workshop agenda is incluclect in Appendix A of this report, and a list of the participants and invited guests is incluclect in Appendix B. The workshop was intenclect to explore aspects of the broact question, What should be the principal purposes, goals, and priorities of the U.S. civil space program? (The complete statement of task is provided in Appendix C.) The goal of the workshop was not to develop definitive answers but to air a range of views and perspectives that will serve to inform later broad public and political discussion of such questions. Therefore this report represents a factual summary, prepared by the rapporteur, Radford Byerly, with staff assistance, of the proceedings of the workshop, including summaries of individual presentations. It should not be taken as a consensus report of the SSB or ASEB or of the National Research Council. The charge for the workshop included broad questions about the principal purposes, goals, and priorities of the U.S. civil space program. All speakers and participants were encouraged to consider the questions in their written abstracts and oral remarks. In addition, the opening of each chapter outlines specific questions the speakers were to address in the workshop sessions, including issues about the contributions of science and exploration, the economic contributions of space, space and foreign policy, and interactions among national security, military, and civilian space efforts. SSB Chair Lennard Fisk, in his opening remarks, also referred to the broad questions and multiple factors that can contribute to raising the level of debate on what the nation should be doing in space, and he outlined the objectives of each session. It was in this spirit of the breadth of issues influencing the space program that the workshop was held. In the end, rather less discussion time was devoted to the space and Earth science programs than to the human spaceflight program, largely because the participants saw the latter as being more problematic and less robust than the former. Participants observed attributes of the science programs that were missing in the human exploration program and saw the opportunity to apply lessons learned from the comparison for the improvement of the human spaceflight program. This report is organized according to the following approach: Chapter 1 provides a brief overall 1X

summary of cross-cutting themes and issues that arose cluring the workshop. Chapter 2 introduces key policy documents and statements that shape the environment toclay for discussing the future of the U.S. civil space program and summarizes the opening remarks of ASEB and SSB Chairs William Hoover and Lennarct Fisk. Chapters 3 through 8 summarize the panelists' remarks and general discussions of each of the workshop sessions. Appendix D provides biographical material on the workshop speakers, and Appendix E presents extenclect abstracts prepared by the invited panelists. x

Acknowlecigment of Reviewers This report has been reviewed in ctraft form by inctivicluals chosen for their diverse perspectives and technical expertise, in accordance with procedures approved by the National Research CounciT's Report Review Committee. The purpose of this inclepenclent review is to provide canctict and critical comments that will assist the institution in making its published report as sound as possible and to ensure that the report meets institutional stanclarcts for objectivity, eviclence, and responsiveness to the stucly charge. The review comments and ctraft manuscript remain confidential to protect the integrity of the deliberative process. We wish to thank the following inctivicluals for their review of this report: Lewis Branscomb, Harvard University (Emeritus), Martin E. Glicksman, Rensselaer Polytechnic Institute, John Logsclon, George Washington University, John McElroy, University of Texas at Arlington (retirect), and Dava J. Newman, Massachusetts Institute of Technology. Although the reviewers listed above have proviclect many constructive comments and suggestions, they were not asked to endorse the conclusions or recommendations, nor ctict they see the final ctraft of the report before its release. The review of this report was overseen by Mary J. Osborn, University of Connecticut Health Center. Appointed by the National Research Council, she was responsible for making certain that an inclepenclent examination of this report was carried out in accordance with institutional procedures and that all review comments were carefully consiclerecl. Responsibility for the final content of this report rests entirely with the rapporteurs and the institution. X1

Next: 1 Summary »
Issues and Opportunities Regarding the U.S. Space Program: A Summary Report of a Workshop on National Space Policy Get This Book
× 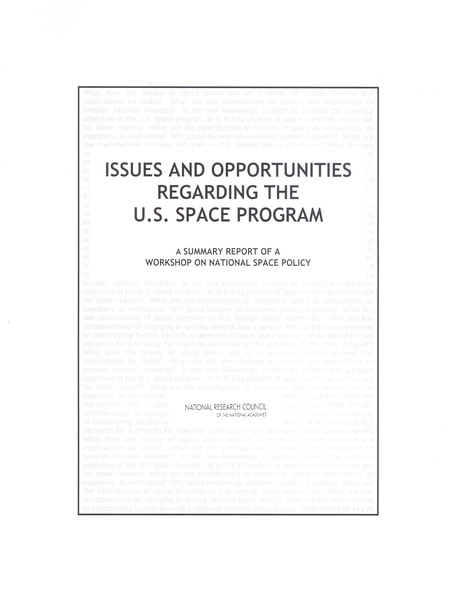 Ever since the completion of the Apollo program, there has been a lack of consensus about the future of human spaceflight. The Columbia tragedy in February 2003 rekindled public debate about this question. In November 2003, the Space Studies Board and the Aeronautics and Space Engineering Board organized a workshop to explore aspects of the question, what should be the principal purpose, goals, and priorities of the U.S. civil space program? This report presents a factual summary of that workshop, which identified past lessons learned and guiding principles for the future of the civil space program. Seven broad themes emerged from the workshop, and these themes are highlighted in the report. The report also presents discussions of strategies for the human spaceflight program and guiding principles of and boundary conditions for a 21st century space policy.