Chapter:4 Recommendations for Changes in Study Design and Execution

Get This Book
Visit NAP.edu/10766 to get more information about this book, to buy it in print, or to download it as a free PDF.
« Previous: 3 Issues with Design and Implementation of the Current Longitudinal Study
Page 39 Share Cite
Suggested Citation:"4 Recommendations for Changes in Study Design and Execution." Institute of Medicine. 2004. Review of NASA's Longitudinal Study of Astronaut Health. Washington, DC: The National Academies Press. doi: 10.17226/10903.
×

4
Recommendations for Changes in Study Design and Execution

The scientific and medical staff of the National Aeronautics and Space Administration (NASA) and the Wyle Laboratories contractors assisting them in managing the Longitudinal Study of Astronaut Health (LSAH) are well aware of the issues in study design and execution outlined in the previous chapter. In her presentation to the Institute of Medicine (IOM) committee in January 2003, Mary Wear in fact included their suggestions for correcting many of those deficiencies (Wear, 2003). This chapter will enumerate those suggestions and the committee’s analysis of them, and then turn to additional recommendations from the committee itself.

LSAH scientists put forth suggested improvements to the study in three areas during their discussions with the IOM committee in March 2003: (1) improving the percentage of comparison participants returning to the Occupational Health Clinic at the Johnson Space Center (JSC) for physical exams, (2) improving the quality of the data collected from the comparison participants to provide a closer match to the data of the astronaut group, and (3) querying the database more frequently and systematically.

Improving the Quality of the Data Collected from the Comparison Participants

Budgetary restrictions have thus far prevented implementation, but LSAH staff members have proposed the following changes to the study:

LSAH staff members currently send a postcard to participants about a month before they are due for a physical exam (their birthday months), asking them to call the clinic and schedule an appointment. A second contact is made by letter or phone if the participant does not respond. If the participant indicates that he or she will be unable to return to JSC for an exam, the staff requests that the participant forward medical records for any visits to personal (i.e., non-JSC) health care professionals since the previous JSC clinic exam.

The LSAH staff proposes to hire another senior-level epidemiologist or statistician to perform statistical analyses, guide data analysts, and review results. At present the staff is completely consumed by the process of data collection. The current staff consists of a single doctoral level epidemiologist who also serves a the project manager, 2.5 masters level epidemiologists, an administrative assistant, 2 data entry clerks, and 3 software specialists.

Implementing the following recommendations, which subsume many of those offered by the LSAH staff, will inevitably involve additional expenditures, but the committee believes they are essential for the validity of the data gathered through the LSAH and ultimately for the creation of a safer space travel program.

NASA should recognize that the LSAH can and should serve the two separate and potentially conflicting goals of occupational surveillance of the health of current and former astronauts and research into the long term health risks associated with manned space flight (and make these activities safer for future astronauts).

for unexpected and sentinel events be carried out by the oversight committee described below.

NASA should take steps to increase the quantity and improve the quality of the data collection and management of the data of the LSAH. The Committee was concerned by the marked variation in the content of the screening examinations that the existing LSAH groups (astronauts, retired astronauts, civil servants and retired civil servants) are currently

The addition of the following would enhance the value of the study:

The Committee recommends several changes in the oversight structure for the LSAH:

Next: 5 Recommendations for Changes in Health Care Policy »
Review of NASA's Longitudinal Study of Astronaut Health Get This Book
× 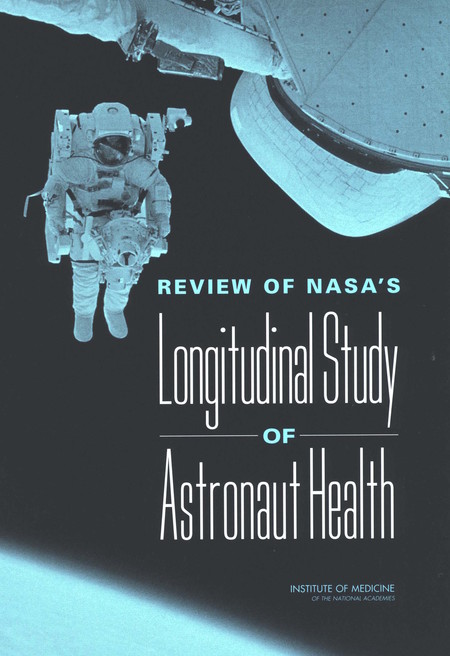 As part of its ongoing commitment to the nation's space program, NASA's medical leadership asked the Institute of Medicine (IOM) to review specific aspects of the scientific basis, policies, and procedures associated with the Longitudinal Study of Astronaut Health (LSAH). NASA created the LSAH in 1992 to address a variety of issues, including both the health of astronauts during space flight and the longer-term health issues that might be associated with space flight and flight training.