Get This Book
Visit NAP.edu/10766 to get more information about this book, to buy it in print, or to download it as a free PDF.
Page i Share Cite
Suggested Citation:"Front Matter." National Research Council. 2004. The 2000 Census: Counting Under Adversity. Washington, DC: The National Academies Press. doi: 10.17226/10907.
×

Panel to Review the 2000 Census

The project that is the subject of this report was supported by contract no. 50-YABC-8-66010 between the National Academy of Sciences and the U.S. Census Bureau. Any opinions, findings, conclusions, or recommendations expressed in this publication are those of the author(s) and do not necessarily reflect the views of the organizations or agencies that provided support for the project.

Copyright 2004 by the National Academy of Sciences. All rights reserved. Printed in the United States of America.

PANEL TO REVIEW THE 2000 CENSUS

Department of Sociology, University of Wisconsin–Madison

Department of Statistics and School of Education, Stanford University

Department of Economics, University of Maryland

The Panel to Review the 2000 Census wishes to thank the many people who have contributed to the panel’s work and helped make possible the preparation of this final report.

We further thank the Census Bureau for arranging for panel members and staff to have access to key data files for analysis, beginning in February 2001. Such access was provided not only to the panel but also to congressional oversight groups, under procedures to safeguard confidentiality. The ability to analyze key data sets provided knowledge of census and A.C.E. procedures and evaluations that would not otherwise have been possible for the panel to obtain.

We also thank David Harris, University of Michigan, and Joseph Salvo, New York City Department of City Planning, for major contributions to the panel’s work. David prepared an insightful paper on the measurement and definition of race and ethnicity in federal statistics and the census. Joe ably chaired a working group on the Local Update of Census Addresses (LUCA) Program commissioned by the panel to evaluate LUCA from the local government perspective.

Throughout its work, the panel benefited from discussions with congressional staff, particularly during the period when oversight authority for the census was vested by the U.S. House of Representatives in a Subcommittee on the Census of the Committee on Government Reform. In particular, we thank David McMillen and Michael Miguel for their insights. We have also benefited from interactions with staff of the U.S. General Accounting Office.

The panel is especially indebted to Constance Citro who, as senior study director, organized the work of the panel and guided its evaluation of the 2000 census. Her wide experience in census issues, her competence in statistical methods, and the clarity of her reasoning have been critical to the successful completion of our interim report and now our final report. We have benefited enormously from her talent and knowledge and feel extremely fortunate to have had her work with us.

The panel was assisted by a very able staff. Daniel Cork played a major role for the panel in conducting analyses of data files from the A.C.E., analyzing 1990 and 2000 census data on mail return rates,

drafting text for the report, developing informative graphs of key results, and preparing the report for release. His hard work and contributions, achieved under tight time pressures, were extraordinary. Andrew White, former director of the Committee on National Statistics, served as study director for the panel from November 1998 through March 2000. He was assisted by Michael Cohen, who organized three panel workshops and contributed to the panel’s work throughout, particularly to the text on issues of evaluation and imputation methods. Meyer Zitter contributed to the panel’s assessments of demographic analysis and the procedures for developing the Master Address File. He also specified and analyzed tables of comparable 1990 and 2000 census item imputation rates for the long-form sample. Michele Ver Ploeg and Marisa Gerstein assisted in data analysis, as did Zhanyun Zhao, University of Pennsylvania. Seth Hauser, now with the U.S. State Department, assisted in the analysis of item imputation rates and drafted text on the measurement of race and ethnicity. Heather Koball, now with the National Center for Children in Poverty at Columbia University, prepared background material for the panel on race and ethnicity and organized and assessed trips for the panel and staff to observe census and A.C.E. operations in January–June 2000. Carrie Muntean, now with the U.S. Foreign Service, prepared background material for the panel on the development of the 1990 and 2000 census address lists and provided invaluable support to the panel’s commissioned working group on the LUCA Program. Joshua Dick, Jamie Casey, and Agnes Gaskin provided valuable project assistance to the panel, particularly in making arrangements for the panel’s workshops. Christine McShane, senior editor of the reports office of the Division of Behavioral and Social Sciences and Education, made important contributions to the report through her fine technical editing. To all we are grateful.

This report has been reviewed in draft form by individuals chosen for their diverse perspectives and technical expertise, in accordance with procedures approved by the Report Review Committee of the National Research Council (NRC). The purpose of this independent review is to provide candid and critical comments that will assist the institution in making the published report as sound as possible and to ensure that the report meets institutional standards for objectivity, evidence, and responsiveness to the study charge.

The review comments and draft manuscript remain confidential to protect the integrity of the deliberative process.

Although the reviewers listed above provided many constructive comments and suggestions, they were not asked to endorse the conclusions or recommendations, nor did they see the final draft of the report before its release. The review of the report was overseen by John C. Bailar III, Professor Emeritus, Department of Health Studies, The University of Chicago. Appointed by the National Research Council, he was responsible for making certain that an independent examination of the report was carried out in accordance with institutional procedures and that all review comments were carefully considered. Responsibility for the final content of this report rests entirely with the authoring panel and the institution.

Panel to Review the 2000 Census

Next: Executive Summary »
The 2000 Census: Counting Under Adversity Get This Book
× 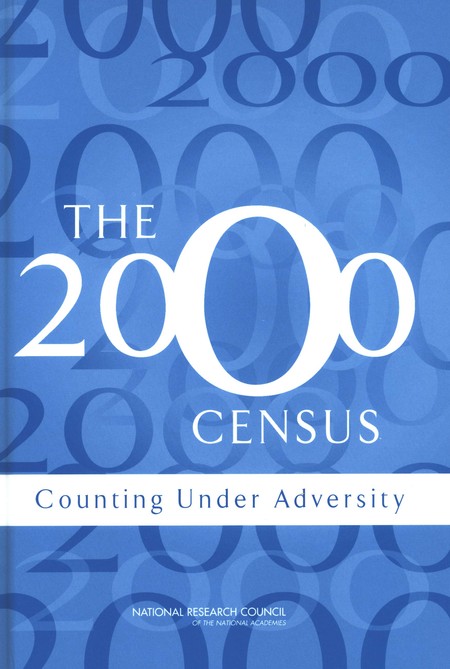 The decennial census was the federal government’s largest and most complex peacetime operation. This report of a panel of the National Research Council’s Committee on National Statistics comprehensively reviews the conduct of the 2000 census and the quality of the resulting data. The panel’s findings cover the planning process for 2000, which was marked by an atmosphere of intense controversy about the proposed role of statistical techniques in the census enumeration and possible adjustment for errors in counting the population. The report addresses the success and problems of major innovations in census operations, the completeness of population coverage in 2000, and the quality of both the basic demographic data collected from all census respondents and the detailed socioeconomic data collected from the census long-form sample (about one-sixth of the population). The panel draws comparisons with the 1990 experience and recommends improvements in the planning process and design for 2010. The 2000 Census: Counting Under Adversity will be an invaluable resource for users of the 2000 data and for policymakers and census planners. It provides a trove of information about the issues that have fueled debate about the census process and about the operations and quality of the nation’s twenty-second decennial enumeration.