Chapter:Appendix D: Biographical Sketches of the Members of the Science, Technology, and Law Panel

Get This Book
Visit NAP.edu/10766 to get more information about this book, to buy it in print, or to download it as a free PDF.
« Previous: Appendix C: Biographical Sketches of the Members and Staff of the Committee on the Use of Third Party Toxicity Research with Human Research Participants
Page 185 Share Cite
Suggested Citation:"Appendix D: Biographical Sketches of the Members of the Science, Technology, and Law Panel." National Research Council. 2004. Intentional Human Dosing Studies for EPA Regulatory Purposes: Scientific and Ethical Issues. Washington, DC: The National Academies Press. doi: 10.17226/10927.
×

Appendix D
Biographical Sketches of the Members of the Science, Technology, and Law Panel

Cochair, Richard A. Merrill (IOM), A.B., Columbia University; B.A., Oxford University; M.A., Oxford University; LL.B., Columbia University School of Law, is Daniel Caplin Professor of Law, University of Virginia Law School. From 1975 to 1977 he served as Chief Counsel to the Food and Drug Administration. He was Dean of the Law School from 1980 to 1988. Since 1991 he has been special counsel to Covington & Burling and was a member of the National Academies planning committee that initiated the 1997 Academy Symposium on Science, Technology, and Law.

Frederick R. Anderson, Jr., B.A. (History of Science), University of North Carolina; J.D., Harvard Law School, Oxford University, is a partner of the law firm of McKenna, Long, & Aldridge, LLP in Washington, D.C. He is former Dean of the Washington College of Law at American University. He was a member of the National Academies’ planning committee that initiated the 1997 Academy Symposium on Science, Technology, and Law.

Margaret A. Berger, A.B., Radcliffe College; J.D., Columbia University School of Law, is the Suzanne J. and Norman Miles Professor of Law at Brooklyn Law School in Brooklyn, New York. She has written exclusively on science and law, and in particular on three key Supreme Court cases (Daubert, Joiner, Kumho) dealing with evidence. She is the co-author of Weinstein’s Evidence.

Paul D. Carrington, B.A., University of Texas; LL.B., Harvard University, is Professor of Law, Duke University Law School. He is the former Dean of Duke University Law School and has taught and published extensively on civil procedures. He was Reporter to the Advisory Committee on Civil Rules of the Judicial Conference of the United States. He also established the Private Adjudication Center, which developed a Registry of Independent Scientific and Technical Advisors to provide disinterested advice to lawyers and judges on scientific issues that are the subject of legal disputes.

Joe S. Cecil, Ph.D. (Psychology), Northwestern University; J.D., Northwestern University, is a Project Director in the Division of Research at the Federal Judicial Center in Washington, D.C. Currently he is directing the Center’s Program on Scientific and Technical Evidence. As part of this program he is responsible for judicial education and training in the area of scientific and technical evidence and serves as principal editor of the Center’s Reference Manual on Scientific Evidence, the primary source book on evidence for federal judges.

Joel E. Cohen (NAS), Dr.P.H. (Population Sciences and Public Health), Harvard University; Ph.D. (Applied Mathematics), Harvard University, is the Abby Rockefeller Mauzé Professor of Populations at the Rockefeller University. At Columbia University, he is Professor of Populations in the School of International and Public Affairs, the Department of Earth and Environmental Sciences, and the Department of Ecology, Evolution, and Environmental Biology. He heads the Laboratory of Populations at both Rockefeller and Columbia. From 1991 to 1995 he served as a U.S. Federal Court-appointed neutral expert on projections of asbestos-related claims associated with the Manville Personal Injury Settlement Trust. In addition, he has served as a Special Master in silicone gel breast implant products liability.

Kenneth W. Dam, B.S., University of Kansas; J.D., University of Chicago; LL.D. (honorary), New School for Social Research, is Max Pam Professor of American and Foreign Law, University of Chicago Law School, and a Senior Fellow at the Brookings Institution. He has devoted his career to public policy issues, both as a practitioner and as a professor. In the former capacity he served as Deputy Secretary, Department of the Treasury (2001-2003) and in the Department of State (1982-1985). In 1973 he was Executive Director of the Council on Economic Policy, a White House office responsible for coordinating domestic and international economic policy. Most of his academic work has centered on law and economics, particularly with respect to international issues.

Rebecca S. Eisenberg, J.D., is Robert and Barbara Luciano Professor of Law at the University of Michigan in Ann Arbor, Michigan. She regularly teaches courses in intellectual property, patent law, trademark law, and torts and has taught courses on legal regulation of science and on legal issues associated with the Human Genome Project.

Provost and Professor of Physics and Applied Physics of the California Institute of Technology, where he has been on the faculty for more than 35 years. His book, States of Matter, helped launch a new discipline, condensed matter physics. He has turned his attention to societal issues that affect science as a profession. In articles, speeches, and colloquia he has addressed conduct and misconduct in science, the end of exponential growth of the scientific enterprise, and issues related to fossil fuel and the climate of Planet Earth.

Sheila S. Jasanoff, Ph.D., Harvard University; J.D., Harvard University, is Pforzheimer Professor of Science and Technology Studies at Harvard University’s John F. Kennedy School of Government. Her longstanding research interests center on the interactions of law, science, and politics in democratic societies. She has written extensively on the place of science and technology in U.S., European, and Indian politics, including Controlling Chemicals: The Politics of Regulation in Europe and the U.S.; Risk Management and Political Culture; The Fifth Branch: Science Advisers as Policymakers; and Science at the Bar: Law, Science, and Technology in America.

Daniel J. Kevles, B.A. (Physics), Princeton University; (European History) Oxford University; Ph.D. (History), Princeton University, is Stanley Woodward Professor of History, Yale University, and J.O. and Juliette Koepfli Professor of the Humanities Emeritus at the California Institute of Technology. His research interests and extensive writing include the interplay of science and society past and present; history of science in America; history of modern physics; history of modern biology; scientific fraud and misconduct; and the history of intellectual property in living organisms.

Robert A. Lonergan, A.B. (English Literature), Fordham College; J.D., Fordham University School of Law (1975); Finance for Senior Executives, Harvard Business School (1997), is Vice President, General Counsel and Corporate Secretary, Rohm and Haas. He is responsible for all of the company’s legal affairs, directing the efforts of 45 Rohm and Haas in-house attorneys, and scores of outside law firms. He is responsible for

ensuring that the company continues to meet compliance, regulatory, safety, environmental, and employment law obligations in the more than 100 countries in which Rohm and Haas conducts business.

Patrick A. Malone, J.D., Yale Law School, is a partner in the law firm of Stein, Mitchell & Mezines in Washington, D.C. Malone, a former medical journalist, represents plaintiffs in medical malpractice and product liability lawsuits. He is a member of the Association of Trial Lawyers, Trial Lawyers of America, and Trial Lawyers for Public Justice.

Richard A. Meserve (NAE), J.D., Harvard Law School; Ph.D. (Applied Physics), Stanford University, is President, Carnegie Institution of Washington. Before assuming the Carnegie presidency in April 2003, he was Chairman of the Nuclear Regulatory Commission, having served since October 1999. He was a member of the National Academies planning committee that initiated the 1997 Academy Symposium on Science, Technology, and Law, and he wrote the amicus briefs on behalf of the National Academy of Engineering in the Kumho case and on behalf of the National Academy of Sciences in the Daubert case. These landmark cases established the basis for admitting expert testimony into court.

Alan B. Morrison, LL.B., Harvard Law School, is with Public Citizen Litigation Group in Washington, D.C., a nonprofit citizen research, lobbying, and litigation organization. Prior to his work at Public Citizen, he was an associate in a law firm and an Assistant U.S. Attorney in New York City.

Thomas D. Pollard (NAS, IOM), M.D., Harvard Medical School, is the Eugene Higgins Professor, Department of Molecular, Cellular and Developmental Biology, Yale University. He was the first to elucidate the diversity of myosin motor proteins and is an expert in the biochemistry and cell biology of proteins that control the dynamics of the actin cytoskeleton.

Jonathan M. Samet (IOM), A.B. (Chemistry and Physics), Harvard College; M.S. (Epidemiology), Harvard School of Public Health; M.D. (Medicine), University of Rochester School of Medicine and Dentistry, is Professor and Chairman, Department of Epidemiology, Johns Hopkins Bloomberg School of Public Health since 1994 and is Co-director, Risk Sciences and Public Policy Institute. An epidemiologist and pulmonary physician, he has focused on the effects of inhaled pollutants, respiratory diseases, cancer, and risk assessment. He has worked extensively on risks posed by indoor and outdoor air pollution.

Fern M. Smith, B.A. (with distinction), Stanford University; J.D., Stanford Law School, is U.S. District Judge for the U.S. District Court for the Northern District of California. Judge Smith is the author of two chapters in the third edition of Moore’s Federal Practice and has written and spoken extensively on evidentiary matters, trial practice, and other topics.

James Gustave Speth, B.A., Yale University; M. Litt., Oxford University; J.D., Yale University, is Dean and Professor in the Practice of Environmental Policy and Sustainable Development. He served most recently as Administrator of the United Nations Development Program and Chair of the United Nations Development Group. Throughout his career, he has provided leadership and entrepreneurial initiatives to many task forces and committees whose roles have been to combat environmental degradation, including the President’s Task Force on Global Resources and Environment; the Western Hemisphere Dialogue on Environment and Development; and the National Commission on the Environment.

David S. Tatel, B.A., University of Michigan; J.D., University of Chicago Law School, is Judge, U.S. Court of Appeals for the District of Columbia Circuit. He was nominated by President Clinton and commissioned in 1994. Prior to his appointment he was a partner in the Washington Law firm of Hogan & Hartson, where he managed the firm’s Education Group. As head of this group he provided legal counsel to school districts, colleges, universities, and education associations throughout the country. 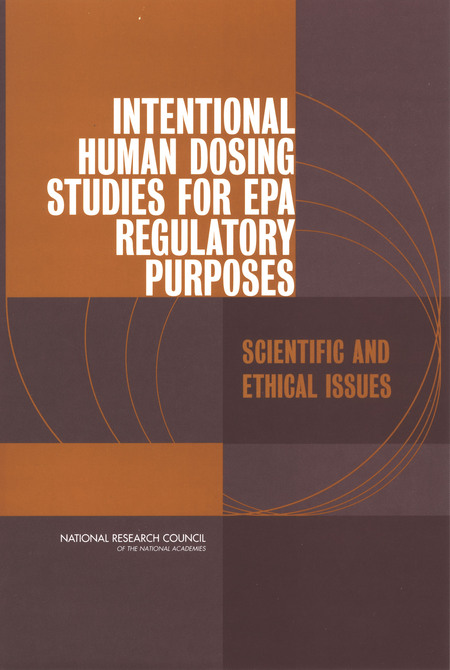 The EPA commissioned The National Academies to provide advice on the vexing question of whether and, if so, under what circumstances EPA should accept and consider intentional human dosing studies conducted by companies or other sources outside the agency (so-called third parties) to gather evidence relating to the risks of a chemical or the conditions under which exposure to it could be judged safe. This report recommends that such studies be conducted and used for regulatory purposes only if all of several strict conditions are met, including the following:

In addition, EPA should establish a Human Studies Review Board (HSRB) to evaluate all human dosing studies–both at the beginning and upon completion of the experiments–if they are carried out with the intent of affecting the agency's policy-making.