Veterans and Agent Orange: Length of Presumptive Period for Association Between Exposure and Respiratory Cancer (2004)

Visit NAP.edu/10766 to get more information about this book, to buy it in print, or to download it as a free PDF.
Page i Share Cite
Suggested Citation:"Front Matter." Institute of Medicine. 2004. Veterans and Agent Orange: Length of Presumptive Period for Association Between Exposure and Respiratory Cancer. Washington, DC: The National Academies Press. doi: 10.17226/10933.
×

THE NATIONAL ACADEMIES PRESS 500 Fifth Street, NW Washington, DC 20001 NOTICE: The project that is the subject of this report was approved by the Governing Board of the National Research Council, whose members are drawn from the councils of the National Academy of Sciences, the National Academy of Engineering, and the Insti- tute of Medicine. The members of the committee responsible for the report were chosen for their special competences and with regard for appropriate balance. Support for this project was provided by the US Department of Veterans Affairs. The project was supported by Cooperative Agreement V101(93)P-1637 between the National Academy of Sciences and the US Department of Veterans Affairs. The views presented in this report are those of the Institute of Medicine Committee to Review the Health Effects in Vietnam Veterans of Exposure to Herbicides and are not necessarily those of the funding agency. International Standard Book Number 0-309-09188-8 (Book) International Standard Book Number 0-309-53143-8 (PDF) Additional copies of this report are available from the National Academies Press, 500 Fifth Street, N.W., Lockbox 285, Washington, DC 20055; (800) 624-6242 or (202) 334- 3313 (in the Washington metropolitan area); Internet, http://www.nap.edu. For more information about the Institute of Medicine, visit the IOM home page at: www.iom.edu. Copyright 2004 by the National Academy of Sciences. All rights reserved. Printed in the United States of America. The serpent has been a symbol of long life, healing, and knowledge among almost all cultures and religions since the beginning of recorded history. The serpent adopted as a logotype by the Institute of Medicine is a relief carving from ancient Greece, now held by the Staatliche Museen in Berlin.

Reviewers T his report has been reviewed in draft form by persons chosen for their diverse perspectives and technical expertise, in accordance with proce- dures approved by the National Research Council's Report Review Com- mittee. The purpose of this independent review is to provide candid and critical comments that will assist the institution in making its published report as sound as possible and to ensure that the report meets institutional standards of objectiv- ity, evidence, and responsiveness to the study charge. The review comments and draft manuscript remain confidential to protect the integrity of the deliberative process. We wish to thank the following individuals for their review of this report: Michael Bates, PhD, MPH, School of Public Health, University of Califor- nia, Berkeley Mark D. Eisner, MD, MPH, Department of Medicine, University of Califor- nia, San Francisco Philip C. Nasca, PhD, School of Public Health and Health Sciences, Univer- sity of Massachusetts, Amherst Tim Ramsay, PhD, Institute of Population Health, University of Ottawa Andrew Salmon, MA, DPhil, Office of Environmental Health Hazard As- sessment, California Environmental Protection Agency Judith T. Zelikoff, PhD, Institute of Environmental Medicine, New York University School of Medicine Although the reviewers listed above have provided many constructive com- ments and suggestions, they were not asked to endorse the conclusions or recom- vii

viii REVIEWERS mendations, nor did they see the final draft of the report before its release. The review of this report was overseen by David J. Tollerud, MD, MPH, of the Institute of Public Health Research at the University of Louisville. Appointed by the Institute of Medicine, he was responsible for making certain that an indepen- dent examination of this report was carried out in accordance with institutional procedures and that all review comments were carefully considered. Responsi- bility for the final content of this report rests entirely with the author committee and the institution.

Preface I n 1991, because of continuing uncertainty about the long-term health effects on Vietnam veterans who where exposed to herbicides during their service in Vietnam (mixtures of 2,4-dichlorophenoxyacetic acid [2,4-D], 2,4,5-tri- chlorophenoxyacetic acid [2,4,5-T], picloram, and cacodylic acid), Congress passed Public Law 102-4, the Agent Orange Act of 1991. That legislation di- rected the secretary of veterans affairs to ask the National Academy of Sciences (NAS) to perform a comprehensive evaluation of scientific and medical informa- tion regarding the health effects of exposure to Agent Orange, other herbicides used in Vietnam, and the various chemical components of those herbicides, in- cluding 2,3,7,8-tetrachlorodibenzo-p-dioxin (TCDD). The secretary was also to ask NAS to conduct updates at least every 2 years for 10 years from the date of the first report to review newly available literature and draw conclusions from the overall evidence. In response to the request, the Institute of Medicine (IOM) of NAS con- vened a committee, whose conclusions IOM published in 1994 in Veterans and Agent Orange: Health Effects of Herbicides Used in Vietnam (hereafter referred to as VAO). The work of later committees resulted in the publication of biennial updates (Update 1996, Update 1998, Update 2000, and Update 2002) and of focused reports reviewing the scientific evidence regarding type 2 (non-insulin- dependent) diabetes (Type 2 Diabetes) and acute myelogenous leukemia in chil- dren (Acute Myelogenous Leukemia). VAO concluded that there is "limited/suggestive" evidence of an association between exposure to at least one of the chemicals of interest (2,4-D, 2,4,5-T and its contaminant TCDD, picloram, and cacodylic acid) and respiratory cancer. ix

x PREFACE That conclusion was reaffirmed in Update 1996, Update 1998, Update 2000, and Update 2002. The Department of Veterans Affairs (VA), on the basis of the findings of VAO and its own review of the available literature, published a notice in the Federal Register on February 3, 1994, stating that there is "a positive association between exposure to herbicides used in the Republic of Vietnam and the subse- quent development of respiratory cancers." The VA further found that "the weight of the available evidence indicates that chemically-induced respiratory cancers manifest within a definitive period following exposure, after which there is little effect from the exposure," and proposed, as part of its rule, that respira- tory cancer will be presumed service connected only if it is manifest within 30 years after exposure. In the Veterans Education and Benefits Expansion Act of 2001, Public Law 107-103, Congress removed the 30-year presumptive period for respiratory can- cer and mandated that the secretary of veterans affairs ask NAS to conduct a study. That study was to review "available scientific literature on the effects of exposure to an herbicide agent containing dioxin on the development of respira- tory cancers in humans." And to review "whether it is possible to identify a period of time after exposure to herbicides after which a presumption of service- connection" of respiratory cancer would not be warranted. To complete this task, the IOM called upon the Update 2002 committee to extend its service and address this issue. This committee consists of members who are leading experts in their fields, have no conflicts of interest with regard to the matter under study, and have taken no public positions concerning the potential health effects of herbicides in Vietnam veterans or related aspects of herbicide or TCDD exposure. Biographical sketches of committee members and staff appear in the appendix. The committee worked on several fronts in conducting this updated review, always with the goal of seeking the most accurate information and advice from the widest possible range of knowledgeable sources. Consistent with procedures of the NAS, the committee met in closed sessions and working group meetings in which members could freely examine, characterize, and weigh the strengths and limitations of the evidence. The committee is grateful to Michelle Catlin who skillfully served as the study director for this project. The committee would also like to acknowledge the excellent work of IOM staff members Jennifer Cohen, Joe Esparza, and Elizabeth Albrigo. Thanks are also extended to Jim Banihashemi, who handled the finances for the project; Norman Grossblatt, who provided excellent editorial skills; and William McLeod, who conducted database searches. Irva Hertz-Picciotto, Chair

Next: Executive Summary »
Veterans and Agent Orange: Length of Presumptive Period for Association Between Exposure and Respiratory Cancer Get This Book
× 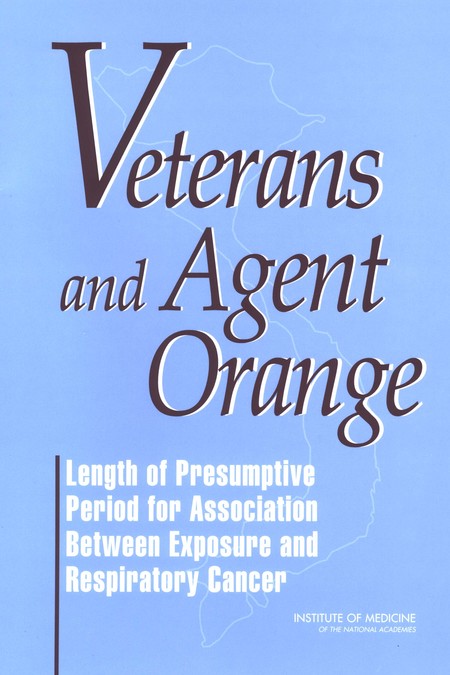 From 1962 to 1971, US military forces sprayed herbicides over Vietnam to strip the thick jungle canopy that helped conceal opposition forces, to destroy crops that enemy forces might depend on, and to clear tall grasses and bushes from the perimeters of US base camps and outlying fire-support bases. Mixtures of 2,4-dichlorophenoxyacetic acid (2,4-D), 2,4,5-trichlorophenoxyacetic acid (2,4,5-T), picloram, and cacodylic acid made up the majority of the herbicides sprayed. Agent Orange was a 50:50 mixture of 2,4-D and 2,4,5-T. At the time of the spraying, 2,3,7,8-tetrachlorodibenzo-p-dioxin (TCDD, one form of dioxin) was an unintended contaminant from the production of 2,4,5-T and was present in Agent Orange and some other formulations sprayed in Vietnam.

In 1991, because of continuing uncertainty about the long-term health effects on Vietnam veterans of the herbicides sprayed, Congress passed Public Law 102-4, the Agent Orange Act of 1991. In response to the request from the VA, IOM extended the service of the Committee to Review the Health Effects in Vietnam Veterans of Exposure to Herbicides that was responsible for Update 2002 to address the question of presumptive period and respiratory cancer. The charge to the committee was to undertake a review and evaluation of the evidence regarding the period between cessation of exposure to herbicides used in Vietnam and their contaminants (2,4-D, 2,4,5-T and its contaminant TCDD, cacodylic acid, and picloram) and the occurrence of respiratory cancer.