Visit NAP.edu/10766 to get more information about this book, to buy it in print, or to download it as a free PDF.
Page i Share Cite
Suggested Citation:"Front Matter." National Research Council. 1988. Urban Change and Poverty. Washington, DC: The National Academies Press. doi: 10.17226/1096.
×

Preface The Committee on National Urban Policy was established by the National Research Council at the end of 1985 at the request of the U.S. Department of Housing and Urban Development and the other federal agencies that contribute to the biennial President's Re- port on National Urban Policy: the U.S. Department of Health and Human Services, the U.S. Department of Labor, the Urban Mass Transportation Administration, and the Economic Development Ad- ministration. Over a 3-year period, the committee has been asked to describe the uncertainties facing cities and their economies and populations; identify the urban policy issues facing state, local, and federal policy mallets; and assess possible policy responses at each level of the intergovernmental system. When the committee met for the first time in January 1986, it identified in a preliminary way a number of emerging and persisting urban problems that seemed to be facing national, state, and loch policy makers (National Research Council, 1986~. These problems in- cluded growing poverty in central cities, the lack of response of some urban economies to national economic recovery, the potential adverse effects of ~creative" capital finance techniques, the capacity of state governments to increase their responsibility for urban problems, and inadequate data for assessing urban conditions. The committee de- cided, however, that it was necessary to examine closely and carefully the most recent information on the underlying demographic, social,

V1 PREFACE economic, and political trends shaping urban conditions before de- ciding which urban policy issues to explore in depth in subsequent years. This volume includes a set of background papers comrn~ssioned in the spring of 1986 to address these issues, which were the basis of a 2-day workshop held by the committee in July 1986. The volume also contains the committee's report summarizing its assessment of the workshop discussions and findings and their implications for policy makers and researchers. The committee concluded that the most serious trend deserving special attention from policy makers and researchers ~ the increase in concentrated urban poverty in large central cities. With the concurrence of its federal sponsors, the committee has embarked in its second year on a study of urban poverty, which will be completed later in 1988. On behalf of the committee, ~ would like to thank the federal officials who have supported and worked with us during the first year, including June Q. Koch, Kenneth J. Beirne, John P. Ross, and George Wright of the U.S. Department of Housing and Urban Devel- opment; Beverly Milkman, Brandon Roberts, and Mary Kate Smith of the Economic Development Administration; Patrick J. Cleary and Gary Reed of the U.S. Department of Labor; Kenneth W. Butler, Larry Schulman, Kenneth Bolton, and Fred Williams of the Urban Mass Transportation Administration; and Richard Shute, Marlys Gustafson, and Michael Fishman of the U.S. Department of Health and Human Services. The committee is also deeply appreciative of the efforts of the authors of the workshop papers, which were commissioned on very short notice but nevertheless were of high quality and usefulness to the committee in assessing current socioeconomic conditions in urban areas. The committee would like to thank those who attended the workshop and lent their experience and expertise by participating in the discussions; workshop attendees are listed in the appendix to the report. The committee is grateful for the support of the staff of the Commission on Behavioral and Social Sciences and Education, in- eluding executive director David A. Goslin, associate executive di- rector P. Brett Hammond, and associate director for reports Eugenia Grohman, who edited the report. Shelly Westebbe took care of the many administrative details of committee meetings and workshops with unfailing good cheer, and Barbara Darr, Michelle Daniels, and Ann Tasseff assisted in the production of the report and papers.

PREFACE ·. V11 ~ would especially like to acknowledge the hard and able work of Michael G. H. McGeary, the study director, who was primarily responsible for organizing the workshop, commissioning the back- ground papers, and preparing this volume for publication. Finally, ~ would like to thank the other committee members for their invaluable contributions in planning and participating in the workshop and producing the report contained in this volume. John C. Weicher, who resigned to take a position in the federal government, was an especially active member of the committee who will be missed. LAURENCE E. LYNN, JR., Chai?. Committee on National Urban Policy

Next: Part I: Committee ReportOverview »
Urban Change and Poverty Get This Book
× 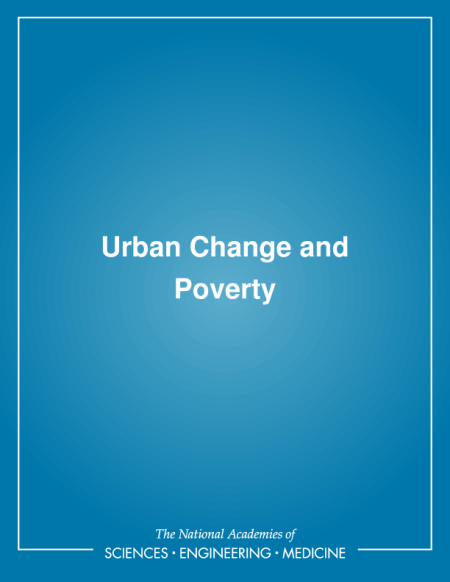 This up-to-date review of the critical issues confronting cities and individuals examines the policy implications of the difficult problems that will affect the future of urban America. Among the topics covered are the income, opportunities, and quality of life of urban residents; family structure, poverty, and the underclass; the redistribution of people and jobs in urban areas; urban economic growth patterns; fiscal conditions in large cities; and essays on governance and the deteriorating state of cities' aging infrastructures.