Electronic Scientific, Technical, and Medical Journal Publishing and Its Implications: Report of a Symposium (2004)

Visit NAP.edu/10766 to get more information about this book, to buy it in print, or to download it as a free PDF.
Page i Share Cite
Suggested Citation:"Front Matter." National Research Council. 2004. Electronic Scientific, Technical, and Medical Journal Publishing and Its Implications: Report of a Symposium. Washington, DC: The National Academies Press. doi: 10.17226/10969.
×

THE NATIONAL ACADEMIES PRESS · 500 Fifth Street, NW · Washington, DC 20001 NOTICE: The project that is the subject of this report was approved by the Governing Board of the National Research Council, whose members are drawn from the councils of the National Academy of Sciences, the National Academy of Engineering, and the Institute of Medicine. The members of the committee responsible for the report were chosen for their special competences and with regard for appropriate balance. Support for this project was provided by the National Academy of Sciences through an unnumbered internal grant. Any opinions, findings, conclusions, or recommendations expressed in this publication are those of the author(s) and symposium speakers and do not necessarily reflect the views of the organizations or agencies that provided support for the project. International Standard Book Number 0-309-09161-6 (Book) International Standard Book Number 0-309-53061-X (PDF) Committee on Science, Engineering, and Public Policy, 500 Fifth Street, NW, Wash- ington, DC 20001; 202-334-2424; Internet, http://www7.nationalacademies.org/ cosepup/ Additional copies of this report are available from the National Academies Press, 500 Fifth Street, NW, Lockbox 285, Washington, DC 20055; (800) 624-6242 or (202) 334-3313 (in the Washington metropolitan area); Internet, http://www.nap.edu Copyright 2004 by the National Academy of Sciences. All rights reserved. Printed in the United States of America

Preface The use of the Internet and other digital information technologies by the scientific, technical, and medical (STM) research community in the United States and most other countries has transformed many aspects of the research and publishing process. The new technologies have created fundamental changes in the production, management, dissemination, and use of all types of information. It is now possible to communicate research results much more quickly, broadly, and openly than was possible through traditional print publications in the past. Researchers are now able to make available independently their data and articles online, where the informa- tion may be easily found, browsed, annotated, critiqued, downloaded, and freely shared. This is resulting in significant changes to the linear path of writing, refereeing, and reviewing of publications as all these functions can be performed concurrently. Most STM publishers also now publish elec- tronic versions of their journals, some exclusively so. The technological developments and resulting changes to the sociology of science are creating both opportunities and challenges for the effective management of scien- tific communication generally, and STM publishing more specifically. Because of the far-reaching implications of these developments, the National Academy of Sciences Council's Committee on Publications rec- ommended that the Council commission a study of the factors involved in the changing mechanisms for access to STM information in the scholarly publications and the various technical, legal, policy, and economic issues that they raise. The committee indicated that it is imperative for the Na- tional Academies to address, in particular, the increasing concerns about the vii

viii PREFACE implications of various models for access to STM publications for the scien- tific community. As a result, the Committee on Science, Engineering, and Public Policy was asked to appoint a committee to oversee the planning for the Symposium on Electronic Scientific, Technical, and Medical Journal Publishing and Its Im- plications, which was held May 19-20, 2003, at the National Academy of Sciences in Washington, D.C. The symposium brought together experts in STM publishing, both producers and users of these publications, to: (1) iden- tify the recent technical changes in publishing, and other factors, that influ- ence the decisions of journal publishers to produce journals electronically; (2) identify the needs of the scientific, engineering, and medical community as users of journals, whether electronic or printed; (3) discuss the responses of not-for-profit and commercial STM publishers and of other stakeholders in the STM community to the opportunities and challenges posed by the shift to electronic publishing; and (4) examine the spectrum of proposals that has been put forth to respond to the needs of users as the publishing industry shifts to electronic information production and dissemination. The symposium was divided into six sessions, each introduced by open- ing comments from a moderator, followed by several invited presentations. Session 1 examined the costs involved with the publication of STM journals while Session 2 looked at the related publication business models. Session 3 explored the legal issues in the production and dissemination of these jour- nals. Sessions 4 and 5 looked toward the future and examined, respectively, what is publication in the future and what constitutes a publication in the digital environment. The final session provided several commentaries on the presentations and discussions that took place during the symposium. The proceedings of the symposium were taped and transcribed, and served as the basis for this symposium report. The formal Proceedings of the symposium are available online via the National Academies Press. The Na- tional Academies hosted a live audio webcast of the symposium to reach a broad audience and receive additional input. The webcast, along with the edited Proceedings of the symposium, can be found on the symposium Web site at http://www7.nationalacademies.org/cosepup/E-Publishing.html. This report is based on excerpts from the symposium Proceedings that the committee found particularly useful to highlight. It summarizes the views of the symposium participants but does not contain any consensus findings, conclusions, or recommendations of the committee itself. A footnote in each major section of the report identifies the individuals responsible for the views presented there. In addition, Chapters 3-7 each have a final section entitled "Is-

PREFACE ix sues Raised in the Discussion" that summarizes portions of the general discussion of the expert invited panel speakers among themselves and with the audience. Because of the large number of speakers providing comments in those discus- sions, we have not attributed each point to specific individuals. However, the source of each point may be found in the edited online Proceedings. The report does not cover all the issues that a more comprehensive study might consider, since it is limited only to the topics discussed during the symposium. Several important issues were identified in subsequent dis- cussions, including: the relationship of journal size (number of "pages," articles, issues) to total annual cost; the "first copy" costs and the relation- ship of those costs to income sources such as subscriptions or payments from aggregators; and federal policies on the publication of articles in STM journals by recipients of federal research support. Nor was it possible to involve representatives of all types of STM jour- nals or of all functions in the broader process of scientific communication. The comments and suggestions made by the various participants cannot be generalized easily across the entire spectrum of publications in the STM jour- nal enterprise. For example, significant differences exist between for-profit and not-for-profit journals, between those that represent professional societ- ies and those that do not, between journals that derive revenues from adver- tisements and those that do not, and between clinical and basic science jour- nals. With regard to the latter, for instance, editors of clinical journals caution that they have a special responsibility in quality control and review. Whereas readers of basic science journals are generally scientists who can critique the articles they read, those who turn to clinical journals for current knowledge frequently may not be experts in the research disciplines covered and have come to depend on the editorial process to assure the accuracy and validity of the papers that they read. The quality and safety of patient care may thus be tied rather directly to the quality of the editorial process in clinical journals. Despite these acknowledged limitations of the symposium discussions and the resulting report, the committee believes that the material presented here will help identify specific areas for more in-depth inquiry by all the stakeholders in STM journal publishing and in scientific communication more generally. Edward Shortliffe Committee Chair Paul Uhlir Project Director

xii ACKNOWLEDGMENTS This volume has been reviewed in draft form by individuals chosen for their diverse perspectives and technical expertise, in accordance with proce- dures approved by the NRC's Report Review Committee. The purpose of this independent review is to provide candid and critical comments that will assist the institution in making its published report as sound as possible and to ensure that the report meets institutional standards for objectivity and evidence. The review comments and draft manuscript remain confi- dential to protect the integrity of the deliberative process. We wish to thank the following individuals for their review of this report: Martin Blume, American Psychological Society; Karen Hunter, Elsevier Health Services; Justin Hughes, Cardozo Law School; James Neal, Columbia University; Andrew Odylzko, University of Minnesota; and Carol Tenopir, University of Tennessee at Knoxville. Although the reviewers listed above have provided constructive com- ments and suggestions, they were not asked to endorse the content of the report, nor did they see the final draft before its release. The review of this report was carried out in accordance with institutional procedures and all review comments were carefully considered. Responsibility for the final content of this report rests entirely with the authoring committee and the institution. Finally, the committee would like to recognize the contributions of the following National Research Council staff. Paul Uhlir, director of the Of- fice of International Scientific and Technical Information Programs, was the project director for the symposium and principal editor of the committee's report; Julie Esanu, program officer for the Office of Interna- tional Scientific and Technical Information Programs, helped organize the symposium and edit the report; Alan Inouye, interim director of the Com- puter Science and Telecommunications Board, and Robin Schoen, pro- gram officer for the Board on Life Sciences, provided advice on the project; Kevin Rowan, project associate for the Committee on Science, Engineer- ing, and Public Policy, provided project support for the May symposium; and Amy Franklin, senior program assistant for the Board on International Scientific Organizations, assisted with the production of this report.

Contents Executive Summary 1 1. Introduction 7 2. Costs of Publication 9 3. Publication Business Models and Revenue 20 4. Legal Issues in the Production, Dissemination, and Use of the 40 Journal Literature 5. What Is Publishing in the Future? 48 6. What Constitutes a Publication in the Digital Environment? 56 7. Symposium Wrap-Up 67 Appendixes A Symposium Agenda 75 B Biographical Information for Speakers and Steering 80 Committee Members C Symposium Participants 94 xiii

Next: Executive Summary »
Electronic Scientific, Technical, and Medical Journal Publishing and Its Implications: Report of a Symposium Get This Book
× 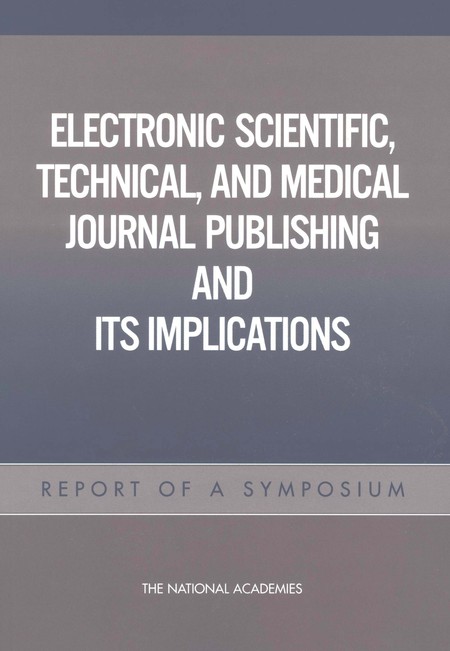 The Symposium on Electronic Scientific, Technical, and Medical (STM) Journals and Its Implications addressed five key areas. The first two areas addressed--costs of publication and publication business models and revenue--focused on the STM publishing enterprise as it exists today and, in particular, how it has evolved since the advent of electronic publishing. The following section reviewed copyright and licensing issues of concern to the authors and to universities. The final two sessions looked toward the future, specifically, at what publishing may be in the future and what constitutes a publication in the digital environment.