Get This Book
Visit NAP.edu/10766 to get more information about this book, to buy it in print, or to download it as a free PDF.
« Previous: References
Page 219 Share Cite
Suggested Citation:"Appendix A: Biographic Sketches." National Research Council. 2004. On Evaluating Curricular Effectiveness: Judging the Quality of K-12 Mathematics Evaluations. Washington, DC: The National Academies Press. doi: 10.17226/11025.
×

Jere Confrey (Chair) is a professor of mathematics education at Washington University in St. Louis. She is currently vice chair of the Mathematical Sciences Education Board. She was also a member of the National Research Council committee that wrote Scientific Research in Education. Dr. Confrey’s research has focused on student learning of functions, ratio and proportion, trigonometry, constructivist theory, equity, technology, and urban school reform and systemic change models. She is a co-founder of the UTEACH program for secondary math and science teacher preparation at the University of Texas in Austin, and was the founder of the SummerMath program at Mount Holyoke College and co-founder of SummerMath for Teachers. She is also president of Quest Math and Science Multimedia. She has served as vice president of the International Group for the Psychology of Mathematics Education, as chair of Special Interest Group-Research in Mathematics Education, and as a member of the editorial boards of the Journal for Research in Mathematics Education, International Journal for Computers in Mathematics Learning, and Cognition and Instruction. Dr. Confrey has taught school at the elementary, secondary, and postsecondary levels. She received a Ph.D. in mathematics education from Cornell University.

Carlos Castillo-Chavez is the Joaquin Bustoz Jr. professor of mathematical biology at Arizona State University. He spent 18 years at Cornell University (1985-2003), the last 4 with a joint professorship appointment in the departments of biological statistics and computational biology and theoretical

and applied mechanics. He will continue his association with Cornell University as an adjunct professor. Dr. Castillo-Chavez has received numerous awards, including two White House Awards (1992 and 1997), the 2002 SACNAS Distinguished Scientist Award, and the Richard Tapia Award (2003). He has co-authored more than 100 publications and edited or co-authored six books. His edited volume (with Tom Banks) on the use of mathematical models in homeland security has just been published in Society for Industrial and Applied Mathematics (SIAM) Frontiers in Applied Mathematics. He held the position of Ulam Scholar at the Center for Nonlinear Studies at Los Alamos National Laboratory during 2003. He received a Ph.D. in analysis and applied mathematics from the University of Washington, Sevens Point.

Douglas Grouws is a professor of mathematics education at the University of Missouri, where he is a William T. Kemper Fellow. His research focuses on the role of the teacher in facilitating student learning in mathematics in whole-class situations, in small instructional groups, in problem solving, and in the use of technology. He is editor of the Handbook of Research on Mathematics Teaching and Learning and has written many articles and chapters on effective mathematics teaching. His current work includes directing the National Science Foundation-funded Mathematics Through Technology Project and serving on a number of committees and boards, including the National Council of Teachers of Mathematics (NCTM) Research Advisory Committee, the Third International Mathematics and Science Study Video Study Advisory Committee, Project Intermath, the NCTM National Assessment of Educational Progress Interpretation Committee, and the Journal of Mathematics Teacher Education Editorial Board. He is also a member of the Executive Committee of the Mathematical Sciences Education Board. He received his Ph.D. in mathematics education from the University of Wisconsin.

Carolyn Mahoney is provost and vice chancellor for academic affairs at Elizabeth City State University, North Carolina. She was inducted into the State of Ohio Women’s Hall of Fame for Education in 1989. Dr. Mahoney was a member of the steering committee of the Mathematical Education of Teachers Project. She has served on several national programs aimed at improving teacher education in mathematics, as well as enhancing public understanding of and appreciation for mathematics. She is a member of the American Mathematics Society, Mathematical Association of America, National Association of Mathematicians, National Council of Teachers of Mathematics, and Association for Women in Mathematics. Dr. Mahoney earned a Ph.D. in mathematics at Ohio State University in 1983.

Donald Saari is a distinguished professor of mathematics and economics at the University of California, Irvine (UCI) as well as the director of the Institute for Mathematical Behavioral Science and the director of the UCI Center for Decision Analysis. He is a member of the National Academy of Sciences and the previous chair of the U.S. National Committee for Mathematics. He is also a member of the Mathematical Sciences Education Board. In his research Dr. Saari has provided deep analyses of dynamical systems—of Newtonian n-body systems and of classical models of economic equilibrium, showing nonconvergence and modifications that converge—and he has recast voting problems in geometric terms, thereby greatly clarifying the nature of voting paradoxes. He received his Ph.D. in mathematics from Purdue.

William Schmidt is a university distinguished professor and professor of measurement and statistical methods at Michigan State University. He was the national project coordinator and executive director of the center that oversaw U.S. participation in the Third International Mathematics and Science Study. His research interests include statistical modeling and the measurement of curriculum. He has written extensively on comparing U.S. school mathematics curricula with the mathematics curricula of other countries.

William Y. Velez is a distinguished university professor and professor of mathematics at the University of Arizona. His research interests are in number theory and algebraic coding theory. Dr. Velez was given national recognition by receiving the Presidential Award for Excellence in Science, Mathematics and Engineering Mentoring from President Clinton. He is largely responsible for the great number of Hispanic students who have

Next: Appendix B: Bibliography of Studies Included in Committee Analysis »
On Evaluating Curricular Effectiveness: Judging the Quality of K-12 Mathematics Evaluations Get This Book
× 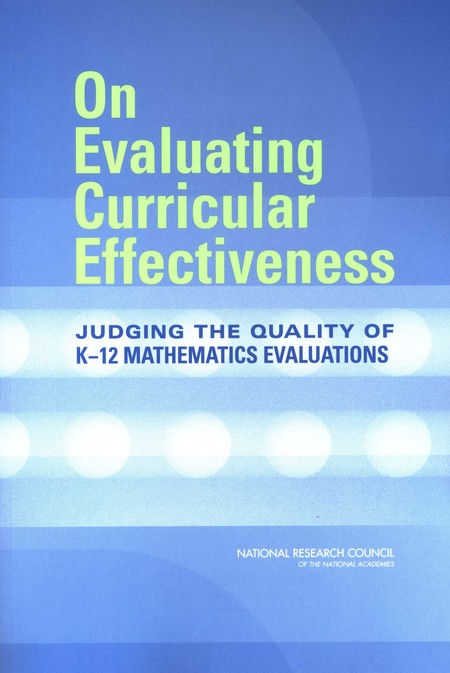 This book reviews the evaluation research literature that has accumulated around 19 K-12 mathematics curricula and breaks new ground in framing an ambitious and rigorous approach to curriculum evaluation that has relevance beyond mathematics. The committee that produced this book consisted of mathematicians, mathematics educators, and methodologists who began with the following charge: