Science and Technology in Armenia: Toward a Knowledge-Based Economy (2004)

Get This Book
Visit NAP.edu/10766 to get more information about this book, to buy it in print, or to download it as a free PDF.
« Previous: Front Matter
Page 1 Share Cite
Suggested Citation:"Executive Summary." National Research Council. 2004. Science and Technology in Armenia: Toward a Knowledge-Based Economy. Washington, DC: The National Academies Press. doi: 10.17226/11107.
×

Armenia has a long tradition of excellence in science, technology, and education. During the Soviet era, Armenian capabilities were oriented to a significant degree toward supporting the Soviet military-industrial complex. Research activities, particularly in physics, were well financed. Education in science and engineering received strong support. A number of industrial facilities operated throughout the country, providing goods for local consumption and for more distant markets within the Soviet Union.

With the disintegration of the Soviet Union, Armenia became isolated from many of its markets, and exports rapidly declined. As the economy spiraled downward, the budgets for research and education plummeted. A major exodus of technical talent began. Although many research and education institutions and a few industrial facilities remain, their capabilities have eroded considerably. Many laboratories and much equipment are obsolete, with little hope of replacement. Funds to cover costs of experimental work are scarce, and the funds that are available are not always directed to activities with high potential to build research capacity and lead to economic development. Paying customers for the results of research products are few in number. While educational standards remain high, the infrastructure supporting students continues to decline, and the “brain drain” has resulted in a serious deficiency of practicing scientists in the 25 to 40 age bracket.

Nevertheless, Armenian scientists who remained have persevered and have achieved impressive results despite severe financial limitations. Now more than ever, science and technology (S&T) are critically important to the future of Armenia. With few export sectors remaining from the Soviet era beyond foodstuffs, alcoholic beverages, and precious and non-precious stones, Armenia’s

scientific manpower has become one of the country’s strongest assets. From the scientific, economic, and political points of view, this asset should be nurtured and promoted to the fullest extent possible.

For the past decade, the international community has recognized Armenia’s technical wherewithal and has provided substantial financial support for its maintenance, although the support is far from adequate to meet the demand. The International Science and Technology Center headquartered in Moscow has become the most important external source of funds for research, and the U.S. Civilian Research and Development Foundation also plays a significant role in supporting research, both directly and through the National Foundation of Science and Advanced Technologies (NFSAT). Various projects supported by the World Bank, the European Bank for Reconstruction and Development, and bilateral assistance programs of a number of donors also have technology dimensions. As is well known, remittances from Armenians living abroad are important in financing small activities (e.g., tuition for university students), and their donations occasionally support large projects (e.g., road construction).

However, in the aggregate, programs supported by more than 20 donors, together with programs of the Armenian government, are barely able to meet the subsistence-level payrolls of the science and engineering workforce. There are few funds for new activities that could eventually generate their own financial resources.

For Armenia to realize its science and technology potential, the following suggestions are offered:

There have been a few successes in recent years. Private entrepreneurs in the information technology sector have developed an industry with annual export sales reported at $50 million. Also on the international scene, the Byurakan Observatory remains an important facility for optical astronomy. Modernization of the agricultural sector is leading to increased exports to countries of the former Soviet Union. Foreign students are paying substantial tuition to study at Armenian universities. Medical services are being offered to patients from nearby states as well as to Armenians. Small specialty companies are beginning to find niches in high-technology markets such as the production of fuel cells and the design and manufacture of circuit board components.

Areas that seem to offer promise for further development include the following:

But in all of these areas, successful economic development based on S&T will require more than merely identifying research and technologies that seem to have economic potential in more mature market economies. It will require building the value chains that have the capacity to finance, develop, and market those promising technologies in a manner that returns value to the Armenian economy.

The handful of successes to date and the long menu of areas of potential interest for the future are encouraging, as is the resourcefulness of Armenian scientists in establishing and maintaining linkages with the international scientific community despite enormous challenges. Yet there will continue to be great difficulty in developing an internationally competitive S&T base and commercially viable innovative businesses. Limited research funds are currently spread over too many institutes and too many programs, and those activities that are not making significant contributions to science or economic development should be abandoned. At the same time, steps must be taken to provide more opportunities for young scientists and engineers to assume responsible positions with adequate compensation within the universities and research institutes that command international respect. With reasonable funding and more focused and determined efforts in the areas highlighted in this report, Armenia should be able to move forward toward a viable knowledge-based economy.1

Next: 1 Overview of the Science, Technology, and Higher Education Infrastructure »
Science and Technology in Armenia: Toward a Knowledge-Based Economy Get This Book
× 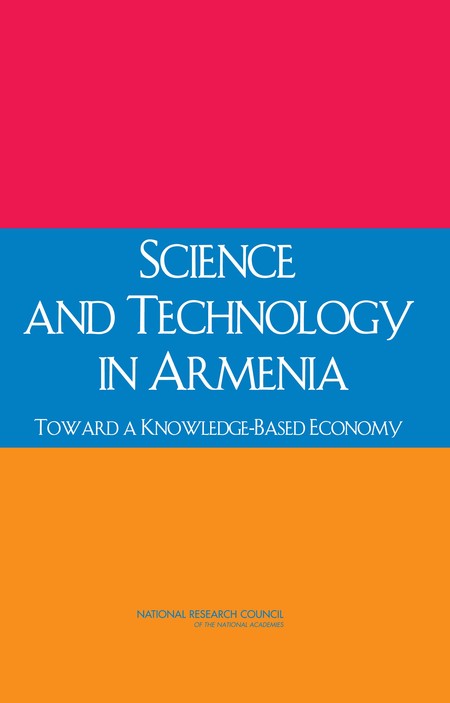 An NRC ad hoc committee analyzed the current status and future development potential of Armenia’s science and technology base, including human and infrastructural resources and research and educational capabilities. The committee identified those fields and institutions offering promising opportunities for contributing to economic and social development, and particularly institutions having unique and important capabilities, worthy of support from international financial institutions, private investment sources, and the Armenian and U.S. governments. The scope of the study included both pure and applied research as well as education in science-related fields. The committee’s report addresses the existing capacity of state and private research institutions, higher education capabilities and trends, scientific funding sources, innovative investment models, relevant success stories, factors hindering development of the science sector, potential domestic Armenian customers for scientific results and products, and opportunities for regional scientific collaboration. An Armenian language version of the report is also available.