This appendix provides technical details on the modeling of production function approaches to valuing aquatic ecosystems discussed in Chapter 4.

More formally, if h is the marketed output of an economic activity, then it can be considered a function of a range of inputs:

For example, the ecological service of particular interest could be the role of coastal wetlands, such as marshlands or mangroves, in supporting offshore fisheries through serving as both a spawning ground and a nursery for fry. The area of coastal wetlands S may therefore have a direct influence on the marketed fish catch h, which is independent from the standard inputs of a commercial fishery Ei…Ek.

There are generally two approaches currently in the literature for valuing the welfare contribution of changes in the ecological service S, which are referred to as static and dynamic approaches (Barbier, 2000). In static approaches, the welfare contribution of changes in the environmental input is determined through producer and consumer surplus measures of any corresponding changes in the one-period market equilibrium for the output h. In dynamic approaches, the ecological service is considered to affect an intertemporal, or “bioeconomic,” production relationship. For example, a coastal wetland that serves as breeding and nursery habitat for fisheries could be modeled as part of the growth function of the fish stock, and any welfare impacts of a change in this

habitat support function can be determined in terms of changes in the long-run equilibrium conditions of the fishery or in the harvesting path to this equilibrium.

To illustrate a static model, the wetland habitat-fishery linkage analysis pioneered by Ellis and Fisher (1987) and Freeman (1991) is used below. Assume that in Equation (1) there is only one conventional input or that all inputs can be aggregated into one unit (e.g., fishing “effort,” denoted as E). The commercial fishery will seek to minimize the total costs of fishing C:

where w is the unit cost of effort.

The fishery will choose the total level of effort E that will minimize costs in Equation (2) subject to the harvesting relationship in Equation (1). This will lead to an optimal effort level E*, which is a function of the harvest h per unit cost w and the area of coastal wetlands that support the fishery S (i.e., E* = E[h,w,S ]). Substituting this relationship into Equation (2) yields the optimal cost function of the fishery:

The change in costs as harvest changes is the standard marginal cost, or supply, curve of the fishery. It has the normal upward-sloping properties for any marketed supply; that is, the fishery faces increasing marginal costs as it supplies more harvested output to the market. However, as shown in Figure 4-1, an increase in wetland area leads to a downward shift of the supply curve. As a result, the marginal cost of supplying a given level of harvest will fall. More wetland habitat increases the abundance of fish and therefore lowers the cost of catch. Also illustrated in Figure 4-1 is that a new market equilibrium and price P of fish will occur, where price equals the new marginal cost (i.e., P = ∂C/∂h). The welfare gains from an increase in the habitat-fishery ecological service that occurs as an increase in S can be measured by the increase in consumer and producer surplus in the market for fish.

Unfortunately, many fisheries are not managed optimally so that all fishermen can agree to maximize joint profits, or equivalently minimize joint profits. Most fisheries have the characteristics of open access. That is, any profits in the fishery will attract new entrants until all the profits disappear. Thus, in an open-access fishery, the market equilibrium for catch occurs where the total revenue of the fishery just equals cost (i.e., Ph = C). Combining the latter equilibrium

where c is the average cost of the fishery. The average costs of supplying more fish to the market are also increasing, and as shown in Figure 4-2, an increase in the wetland habitat will also lower these average costs. However, welfare gains from an increase in this ecological service are now measured by the change in consumer surplus only. Since there are no profits in an open-access fishery, there is no producer surplus gain from the improved ecological service.

A dynamic approach adapts bioeconomic fishery models to account for the role of a coastal habitat in terms of supporting the fishery, usually by assuming that the effect of changes in habitat area is on the carrying capacity of the fish stock and thus indirectly on production. Defining Xt as the stock of fish measured in biomass units, any net change in growth of this stock over time can be represented as

Thus, net expansion in the fish stock occurs as a result of biological growth in the current period F(Xt, St), net of any harvesting h(Xt, Et), which is a function of the stock as well as fishing effort Et . The influence of wetland habitat area St as a breeding ground and nursery habitat on growth of the fish stock is assumed to be positive, ∂F/∂S > 0, because an increase in mangrove area will mean more carrying capacity for the fishery and thus greater biological growth.

To simplify this analysis, it will be restricted to the open-access case. The standard assumption for an open-access fishery is that the effort in the next period will adjust in response to real profits made in the current period (Clark, 1976). Letting p(h) represent landed fish price per unit harvested, w the unit cost of effort, and Φ > 0 the adjustment coefficient, the fishing effort adjustment equation is

In the long run, the fishery is assumed to be in equilibrium, and both the fish stock and the effort are constant: that is, Xt+1 = Xt = XA and Et+1 = Et = EA. In Equation (5), this implies that any harvesting h(XA, EA) just offsets biological

growth F(XA, S). Also, in Equation (6), all of the profits in the fishery are dissipated in the long run, that is, p(hA)hA = wEA. The latter expression can be rearranged to solve for the steady-state fish stock XA in terms of the equilibrium price pA, effort EA, and cost w (i.e., XA = X[PA, EA, w]). Substituting for XA in the equilibrium condition for Equation (5) yields the long-run inverse supply curve of the fishery:

For an open-access fishery, this equilibrium supply curve is backward-bending (Clark, 1976). However, since coastal wetland habitat is an argument in the growth function of the fishery, the effect of an increase in wetland area will be to shift the long-run supply curve of the fishery downward and thus raise harvest levels. This effect is shown in Figure 4-3, in the case of a loss of wetland area. Welfare losses can be measured by the fall in consumer surplus, which will be greater if the demand curve is more inelastic. 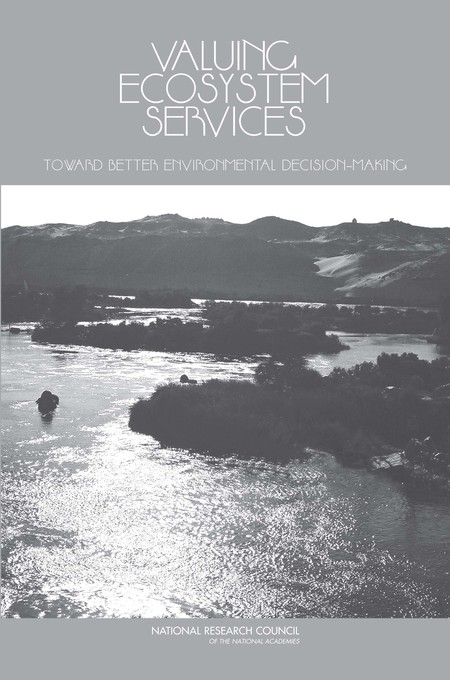 Nutrient recycling, habitat for plants and animals, flood control, and water supply are among the many beneficial services provided by aquatic ecosystems. In making decisions about human activities, such as draining a wetland for a housing development, it is essential to consider both the value of the development and the value of the ecosystem services that could be lost. Despite a growing recognition of the importance of ecosystem services, their value is often overlooked in environmental decision-making. This report identifies methods for assigning economic value to ecosystem services—even intangible ones—and calls for greater collaboration between ecologists and economists in such efforts.