Contaminants in the Subsurface: Source Zone Assessment and Remediation (2005)

Get This Book
Visit NAP.edu/10766 to get more information about this book, to buy it in print, or to download it as a free PDF.
Page i Share Cite
Suggested Citation:"Front Matter." National Research Council. 2005. Contaminants in the Subsurface: Source Zone Assessment and Remediation. Washington, DC: The National Academies Press. doi: 10.17226/11146.
×

CONTAMINANTS IN THE SUBSURFACE

Committee on Source Removal of Contaminants in the Subsurface

This study was supported by Contract Number DACA31-02-2-0001 between the National Academy of Sciences and the U.S. Department of the Army. Any opinions, findings, conclusions, or recommendations expressed in this publication are those of the author(s) and do not necessarily reflect the views of the organizations or agencies that provided support for the project.

COMMITTEE ON SOURCE REMOVAL OF CONTAMINANTS IN THE SUBSURFACE

WATER SCIENCE AND TECHNOLOGY BOARD

Resources for the Future, Washington, D.C.

Remediation of contaminated groundwater sites has been the subject of thousands of research studies (bench experiments) and both pilot and full-scale field projects over the past two decades, consuming billions of dollars; however, the effectiveness of such efforts is largely unknown. A landmark 1994 National Research Council (NRC) study, Alternatives for Ground Water Cleanup, reviewed data on the performance of remediation projects available at that time and stated, “As a result of these studies, there is almost universal concern among groups with diverse interests in groundwater contamination…that the nation may be wasting large amounts of money on ineffective remediation efforts.”

A number of more recent studies by the NRC and government agencies have concluded that while various technologies have been demonstrated to be effective at removing contaminant mass from the subsurface under certain conditions, their performance is so site specific that it is difficult to make meaningful generalizations. It has also been concluded that restoration to drinking water standards is unlikely to be achieved at complex sites in a reasonable period of time (e.g., 100 years), particularly when there is a source zone (a highly contaminated area that is defined in Chapter 1) present. Hence, it is currently difficult to determine when and if remediation of source zones is appropriate.

The Army, like other branches of the military and many private industrial operations, has a large number of complex sites at which there is reason to expect that source zones are present. In view of the high cost of remediation of such sites (the Army’s remaining liability alone is estimated at almost $4 billion), the question of what source zone remediation can accomplish and whether it is appropriate for individual sites is critical.

This report, the result of a study undertaken at the request of the Army, develops a logical basis on which to evaluate source zone remediation on a site-specific basis. It puts the technical questions of technology selection and probable performance in the context of site characteristics, remediation objectives, and metrics. This structure reflects the fact that whether a remediation project “works” or not is a function of the objectives of the project, the technology selected, and the site characteristics.

The report discusses how the diverse aspects of stakeholder and regulatory concerns, site hydrogeology, technology selection, and performance monitoring can be incorporated in the decision-making process, and thus is intended to inform decision makers within the Army, the rest of the military, and many other government agencies and the private sector about potential options for their sites contaminated with dense nonaqueous phase liquids (DNAPLs) and chemical explosives. The necessity of using a formal decision-making process derives from the influence of site-specific parameters on remediation performance, the public’s desire for aggressive remediation, the high cost of remediation, and the implausibility of complete restoration in most cases, as emphasized in earlier studies.

This report has been reviewed by individuals chosen for their diverse perspectives and technical expertise, in accordance with the procedures approved by the NRC’s Report Review Committee. The purpose of this independent review is to provide candid and critical comments that will assist the authors and the NRC

in making the published report as sound as possible and to ensure that the report meets institutional standards of objectivity, evidence, and responsiveness to the study charge. The reviews and draft manuscripts remain confidential to protect the integrity of the deliberative process. We thank the following individuals for their participation in the review of this report: Elizabeth Anderson, Sciences International, Inc.; John Hopkins, Los Alamos National Laboratory; Michael Kavanaugh, Malcolm Pirnie, Inc.; Douglas Mackay, UC Davis; Jeffrey Marquesee, SERDP/ESTCP Program Office; Richard Martel, Université du Québec; Suresh Rao, Purdue University; William Walsh, Pepper Hamilton LLP; and Charles Werth, University of Illinois. Although the reviewers listed above have provided many constructive comments and suggestions, they were not asked to endorse the conclusions or recommendations, nor did they see the final draft of the report before its release. The review of this report was overseen by Randall Charbeneau, University of Texas. Appointed by the NRC, he was responsible for making certain that an independent examination of this report was carried out in accordance with institutional procedures and that all review comments were carefully considered. Responsibility for the final content of this report rests entirely with the authoring committee.

Next: Executive Summary »
Contaminants in the Subsurface: Source Zone Assessment and Remediation Get This Book
× 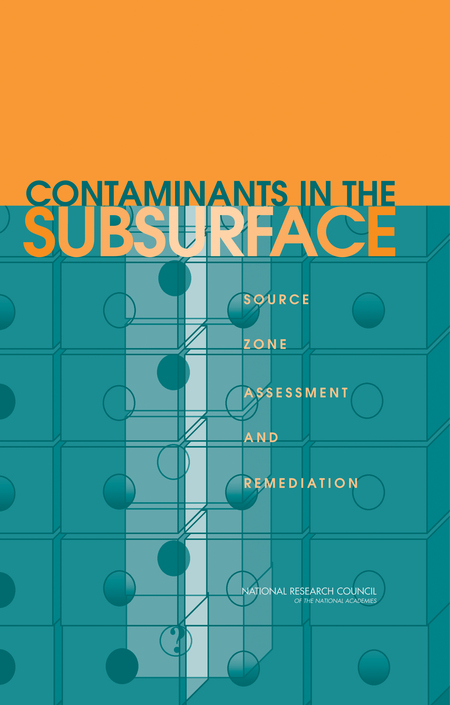