Get This Book
Visit NAP.edu/10766 to get more information about this book, to buy it in print, or to download it as a free PDF.
Page i Share Cite
Suggested Citation:"Front Matter." National Research Council. 2005. Marine Mammal Populations and Ocean Noise: Determining When Noise Causes Biologically Significant Effects. Washington, DC: The National Academies Press. doi: 10.17226/11147.
×

This study was supported by Grant No. N00014-03-1-0886 between the National Academy of Sciences and the National Oceanographic Partnership Program with support from the National Oceanic and Atmospheric Administration, Office of Naval Research, National Science Foundation, and the Minerals Management Service. Any opinions, findings, conclusions, or recommendations expressed in this publication are those of the author(s) and do not necessarily reflect the views of the organizations or agencies that provided support for the project.

The most basic goal of the Marine Mammal Protection Act (MMPA) (16 U.S.C. 1361) is to maintain marine mammals as a “significant functioning element in the ecosystem of which they are a part.” The MMPA translates that ecosystem goal to the population level by aiming to ensure that marine mammal stocks do not fall below or are restored to their optimal sustainable population sizes. Although the main goals of the MMPA are defined at the ecosystem and population levels, its primary focus of regulation is at the level of the individual. When the MMPA was enacted, marine mammal populations were threatened by hunting and by deaths resulting

from becoming entangled in nets or otherwise killed in fisheries. The primary regulatory mechanism in the MMPA was a prohibition of the taking of marine mammals; where “take” means to harass, hunt, capture, or kill or attempt to harass, hunt, capture, or kill any marine mammal. The prohibition of taking has reduced the death and injury of marine mammals enough that today many important threats involve habitat degradation and the cumulative effects of harassment. Although harassment is included as a prohibited taking in the MMPA, this prohibition has proved ill suited for protecting marine mammal habitat and regulating cumulative effects.

One approach for protecting marine mammals might be to monitor their populations and initiate protective measures for populations in decline. However, we cannot estimate trends precisely for most marine mammal populations, and by the time a decline is detected, it may be too late. In addition, we also need methods to determine which human activities or natural phenomena are causing population declines or inhibiting population recovery. Many effects of human activities on individual marine mammals occur on a time scale of seconds to years, effects on populations on a scale of years to generations, and effects on ecosystems on a scale of generations to centuries. This report focuses on changes at the population level, but what can be observed are the much faster changes in the behavior and physiology of individuals. The basic goal of this report is to explore the scientific challenge of using short-term observations at the level of individuals to predict effects on populations. Such a predictive model would serve two functions: identifying when the cumulative sum of human effects poses a risk to a population and identifying the activities that pose the greatest risk.

What little we know about behavioral responses of marine mammals to anthropogenic noise highlights the importance of context, including the demographic status of the animals receiving the sound; the characteristics, location, and movement of the sound source; and the location of the animals. The history of the animals is also important: prior exposure to the sound could have resulted in habituation or sensitization. Context includes population status and ecosystem changes; responses that would be insignificant in a population near its carrying capacity can become significant in populations that are depleted or that are encountering multiple stressors, such as El Niño.

Our glimpses into the lives of marine mammals are so short that it is difficult to determine whether the small part of a behavioral reaction we usually can observe is biologically significant. In contrast with Supreme

Court Justice Potter Stewart’s statement with respect to pornography, “I know it when I see it” (Jacobellis v. Ohio, 378 U.S. 184, 197 [1964]), the problem in determining the biological significance of marine mammal responses is that often we do not know them when we see them. Marine mammals are so hard to observe that we may never see serious problems without studies that are targeted to understand their normal behavior and physiology in the wild. A basic tenet of responsible management and conservation is the need to balance the risks posed by overregulation and those posed by underregulation; the latter carry more weight in conditions of greater uncertainty. The depth of our uncertainty in these issues can make it difficult to calibrate the proper extent of precaution.

A reader who expects this volume to provide a “Eureka” moment of insight into the biological significance of marine mammal responses to noise will be disappointed. That should not come as a surprise. Biological significance has not been well defined in many animal groups that are much more amenable to observation than marine mammals and on which much more data are available. The last few decades have seen a rapid increase in studies of the responses of marine mammals to noise, and there is growing evidence that some sounds play a role in lethal strandings of deep-diving beaked whales, but there is not one case in which data can be integrated into models to demonstrate that noise is causing adverse affects on a marine mammal population. In the case of strandings, the primary data gaps are in our ignorance of the population size and status of beaked whales, and our uncertainty about the number of animals killed or injured. For most other noise effects, the primary source of uncertainty stems from our difficulty in determining the effects of behavioral or physiological changes on an individual animal’s ability to survive, grow, and reproduce.

This report contains a conceptual model designed to serve as a roadmap for developing a predictive model that will relate behavioral responses caused by anthropogenic sound to biologically significant, population-level consequences. It identifies the extent of current knowledge and data gaps in each component of the proposed conceptual model to show where research is most needed. In addition to pointing toward a decade-long research agenda for the predictive model, the report suggests management alternatives for the short term and the intermediate term. It also recommends changes in the regulatory structure to include effects of sound on marine mammals within the broader management structure now used exclusively for fisheries. The goal is a common metric for the impact of all human activities on marine mammals and consistent regulation of that impact.

Although a model for predicting the biological significance of different effects cannot be created today, this report offers an approach that can be implemented now to identify, within specified limits, when the responses of marine mammals to anthropogenic noise do not rise to the level of biological significance. The first step in dealing with an apparently intractable problem is to bound it, and this report describes a method for doing that.

This report was greatly enhanced by the participants in the workshop held as part of the study. The committee would first like to acknowledge the efforts of those who gave presentations at meetings and thereby helped to set the stage for fruitful discussions in the closed sessions that followed:

This report has been reviewed in draft form by persons chosen for their diverse perspectives and technical expertise, in accordance with procedures approved by the National Research Council’s Report Review Committee. The purpose of this independent review is to provide candid and critical comments that will assist the institution in making its published report as sound as possible and to ensure that the report meets institutional standards of objectivity, evidence, and responsiveness to the study charge. The review comments and draft manuscript remain confidential to protect the integrity of the deliberative process. We wish to thank the following for their participation in their review of this report:

Although the reviewers listed above have provided many constructive comments and suggestions, they were not asked to endorse the conclusions or recommendations, nor did they see the final draft of the report before its release. The review of this report was overseen by John Dowling, Harvard University, and Andrew Solow, Woods Hole Oceanographic Institution, appointed by the National Research Council, who were responsible for making certain that an independent examination of the report was carried out in accordance with institutional procedures and that all review comments were carefully considered. Responsibility for the final content of the report rests entirely with the committee and the institution. 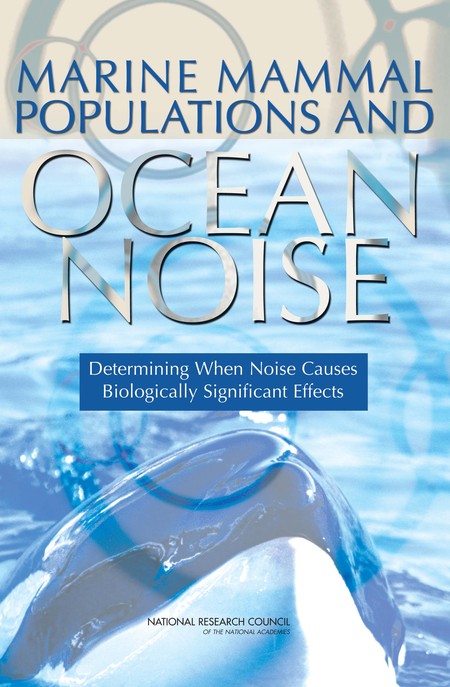 Attention has been drawn to the subject of how ocean noise affects marine mammals by a series of marine mammal strandings, lawsuits, and legislative hearings, and most recently, the report from the U.S. Commission on Ocean Policy. One way to assess the impact of ocean noise is to consider whether it causes changes in animal behavior that are "biologically significant," that is, those that affect an animal's ability to grow, survive, and reproduce. This report offers a conceptual model designed to clarify which marine mammal behaviors are biologically significant for conservation purposes. The report is intended to help scientists and policymakers interpret provisions of the federal Marine Mammal Protection Act.