Getting Up to Speed: The Future of Supercomputing (2005)

Get This Book
Visit NAP.edu/10766 to get more information about this book, to buy it in print, or to download it as a free PDF.
Page i Share Cite
Suggested Citation:"Front Matter." National Research Council. 2005. Getting Up to Speed: The Future of Supercomputing. Washington, DC: The National Academies Press. doi: 10.17226/11148.
×

GETTING UP TO SPEED THE FUTURE OF SUPERCOMPUTING

Committee on the Future of Supercomputing

Computer Science and Telecommunications Board

Support for this project was provided by the Department of Energy under Sponsor Award No. DE-AT01-03NA00106. Any opinions, findings, conclusions, or recommendations expressed in this publication are those of the authors and do not necessarily reflect the views of the organizations that provided support for the project.

Cover images (clockwise from top right, front to back)

3. Large-eddy simulation of a Rayleigh-Taylor instability run on the Lawrence Livermore National Laboratory MCR Linux cluster in July 2003. The relative abundance of the heavier elements in our universe is largely determined by fluid instabilities and turbulent mixing inside violently exploding stars.

4. Three-dimensional model of the structure of a ras protein. Human Genome Program, U.S. Department of Energy, Office of Science.

COMMITTEE ON THE FUTURE OF SUPERCOMPUTING

University of Illinois at Urbana-Champaign,

PHIL HILLIARD, Research Associate (through May 2004)

COMPUTER SCIENCE AND TELECOMMUNICATIONS BOARD

High-performance computing is important insolving complex problems in areas from climate and biology to national security. Several factors have led to the recent reexamination of the rationale for federal investment in research and development in support of high-performance computing, including (1) continuing changes in the various component technologies and their markets, (2) the evolution of the computing market, particularly the high-end supercomputing segment, (3) experience with several systems using the clustered processor architecture, and (4) the evolution of the problems, many of them mission-driven, for which supercomputers are used.

The Department of Energy’s (DOE’s) Office of Science expressed an interest in sponsoring a study by the Computer Science and Telecommunications Board (CSTB) of the National Research Council (NRC) that would assess the state of U.S. supercomputing capabilities and relevant research and development. Spurred by the development of the Japanese vector-based Earth Simulator supercomputer, the Senate’s Energy and Water Development Appropriations Committee directed the Advanced Simulation and Computing (ASC) program of the National Nuclear Security Administration (NNSA) at DOE to commission, in collaboration with DOE’s Office of Science, a study by the NRC. Congress also commissioned a study by the JASONs1 to identify the distinct requirements of the stockpile stewardship program and its relation to the ASC acquisition strategy.

CSTB convened the Committee on the Future of Supercomputing to assess prospects for supercomputing technology research and development in support of U.S. needs, to examine key elements of context—the history of supercomputing, the erosion of research investment, the changing nature of the problems demanding supercomputing, and the needs of government agencies for supercomputing capabilities—and to assess opportunities for progress. The 18 distinguished members of the study committee (see Appendix A for their biographies) were drawn from academia, industry, and government research organizations in the United States. Several committee members have had previous government and/or industry service. Their collective expertise includes software, computer architecture, performance assessment, applications using supercomputing, economics, and policy matters.

The committee did its work through its own expert deliberations and by soliciting input from key officials in its sponsoring agency (DOE) and numerous experts in both the United States and Japan, including government officials, academic researchers, supercomputer manufacturers, software vendors, supercomputer center managers, and application users of supercomputing systems (see Appendix B). In addition to meeting six times, the committee hosted a workshop attended by more than 20 scientists from a broad range of disciplines to explore the supercomputing needs and opportunities of key scientific domains in the coming decade and to discuss the supercomputing technologies that will facilitate supercomputer use in these domains. Many of the workshop participants provided white papers (see Appendix C for a list) expressing their views on computational challenges in supercomputing, which informed both the workshop and this report.

To facilitate communication within the broader community, the committee hosted a town hall meeting at the annual 2003 Supercomputing

Conference in Phoenix, Arizona. In addition, a subset of the committee spent one week in Japan meeting with senior colleagues from the Japanese government, industry, and academia to discuss scientific, technical, and policy issues of mutual interest and to better understand both the similarities and the differences in how the two countries approach supercomputing. They visited several sites in Japan, including the Earth Simulator; the government ministry responsible for funding the Earth Simulator; a university supercomputer center; Japan’s Aerospace Exploration Agency; and an auto manufacturer. On the committee’s behalf, the National Academy of Engineering co-sponsored with the Engineering Academy of Japan a 1-day forum in Tokyo on the future of supercomputing. Twenty-five Japanese supercomputing experts participated in the forum. The sharing of ideas in those meetings provided important perspectives that contributed to the completeness and accuracy of this report. It is the hope of the committee that activities such as the Tokyo forum will lead to future collaboration between Japan and the United States in areas that will advance supercomputing in both countries.

In July 2003, the committee released an interim report2 that provided a high-level description of the state of U.S. supercomputing, the needs of the future, and the factors that contribute to meeting those needs. That report generated a number of comments that helped to guide the committee in its work for this final report. Additional inputs helpful to committee members and staff came from professional conferences, the technical literature, and government reports.

The committee is grateful to the many people who contributed to this complex study and its comprehensive report. First and foremost, the committee thanks the sponsors, DOE’s Office of Science (Fred Johnson and Dan Hitchcock) and DOE’s NNSA (Dimitri Kusnezov, Edgar Lewis, and José Muñoz), not only for their financial support but also for their help in facilitating meetings with people with whom its members wished to speak.

The committee appreciates the thoughtful testimony received from many individuals at its plenary sessions (see Appendix B for a complete list of briefers). The NSA and DOE site visits provided critical input to the committee deliberations. These site visits would not have been possible without the assistance of people at each locale. The committee and staff thank the following people for their help: Gary D. Hughes (NSA), Lynn Kissel (Lawrence Livermore National Laboratory), James S. Peery (Los Alamos National Laboratory),Horst D. Simon (Lawrence Berkeley Na-

Many people were instrumental in making the trip to Japan a success. The committee is extremely grateful to Kenichi Miura (Fujitsu fellow) and Tadashi Watanabe (NEC) for their assistance before and during the trip. The 1-day Japan–U.S. Forum on the Future of Supercomputing would not have been possible without the support of the Engineering Academy of Japan and the National Academy of Engineering. The committee learned a lot from insightful presentations and discussions from all the Japanese forum participants. The committee and staff also thank the individuals at each site who took time to meet with the committee. In particular, they thank Tetsuya Sato at the Earth Simulator Center and Harumasa Miura at the Ministry of Education, Culture, Sports, Science, and Technology. Maki Haraga provided excellent translation services and logistical help for the committee’s entire trip.

The committee was fortunate to receive many thoughtful and perceptive comments from the reviewers as well as from the Monitor and the Coordinator of this report. These comments were instrumental in helping the committee to sharpen and improve its report.

Finally, the committee thanks the various members of the NRC staff who helped to move this report from vision to reality. Cynthia Patterson provided continuing wisdom, guidance, encouragement, and friendship, in concert with her hard work on the report. Margaret Huynh’s skills in organizing the committee’s meetings and supporting its efforts and Phil Hilliard’s research support were key contributions to the work of the committee. Liz Fikre edited the final manuscript for publication. Kevin Hale and Machelle Reynolds successfully facilitated the security clearances and security review necessary to complete this study in a timely manner. Janice Mehler and Liz Panos were very helpful in facilitating and expediting the review process.

Committee on the Future of Supercomputing

This report has been reviewed in draft form by individuals chosen for their diverse perspectives and technical expertise, in accordance with procedures approved by the National Research Council’s (NRC’s) Report Review Committee. The purpose of this independent review is to provide candid and critical comments that will assist the institution in making the published report as sound as possible and to ensure that the report meets institutional standards for objectivity, evidence, and responsiveness to the study charge. The review comments and draft manuscript remain confidential to protect the integrity of the deliberative process. We wish to thank the following individuals for their review of this report:

Although the reviewers listed above have provided many constructive comments and suggestions, they were not asked to endorse the conclusions or recommendations, nor did they see the final draft of the report before its release. The review of this report was overseen by Elsa Garmire of Dartmouth University and Samuel H. Fuller of Analog Devices, Inc. Appointed by the NRC, they were responsible for making certain that an independent examination of this report was carried out in accordance with institutional procedures and that all review comments were carefully considered. Responsibility for the final content of this report rests entirely with the authoring committee and the institution.

Next: Executive Summary »
Getting Up to Speed: The Future of Supercomputing Get This Book
× 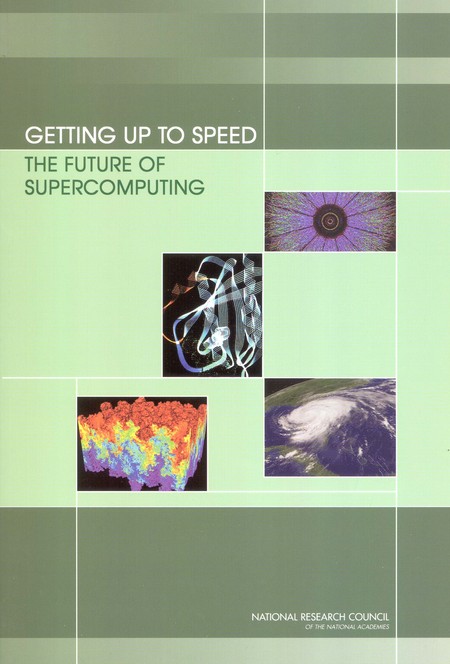 Supercomputers play a significant and growing role in a variety of areas important to the nation. They are used to address challenging science and technology problems. In recent years, however, progress in supercomputing in the United States has slowed. The development of the Earth Simulator supercomputer by Japan that the United States could lose its competitive advantage and, more importantly, the national competence needed to achieve national goals. In the wake of this development, the Department of Energy asked the NRC to assess the state of U.S. supercomputing capabilities and relevant R&D. Subsequently, the Senate directed DOE in S. Rpt. 107-220 to ask the NRC to evaluate the Advanced Simulation and Computing program of the National Nuclear Security Administration at DOE in light of the development of the Earth Simulator. This report provides an assessment of the current status of supercomputing in the United States including a review of current demand and technology, infrastructure and institutions, and international activities. The report also presents a number of recommendations to enable the United States to meet current and future needs for capability supercomputers.