Get This Book
Visit NAP.edu/10766 to get more information about this book, to buy it in print, or to download it as a free PDF.
« Previous: Appendix A Biographical Information
Page 283 Share Cite
Suggested Citation:"Glossary." National Research Council. 2007. Emergency and Continuous Exposure Guidance Levels for Selected Submarine Contaminants: Volume 1. Washington, DC: The National Academies Press. doi: 10.17226/11170.
×

Accommodation: The act or state of adjustment or adaptation.1

ACGIH (American Conference of Governmental Industrial Hygienists): ACGIH is a member-based organization and community of professionals that advances worker health and safety through education and the development and dissemination of scientific and technical knowledge. ACGIH publishes exposure guidance values called Threshold Limit Values (TLVs) and Biological Exposure Indices (BEIs). Exposures at or below TLVs or BEIs do not create an unreasonable risk of disease or injury. TLVs and BEIs are designed for use by industrial hygienists in making decisions regarding safe levels of exposure to various chemical substances and physical agents found in the workplace.2

Adaptation: The acquisition of modifications that fit a plant or animal to life in a new environment or under new conditions.1

Aerosol: A suspension of liquid or solid particles in a gas.5

Alveolar macrophage: A mononuclear phagocytic cell arising from monocytic stem cells in bone marrow whose function is to ingest and digest foreign matter in the alveoli.1

Area under the curve (AUC): A measure of exposure that includes both duration and concentration. It is calculated from the curve that results when the concentrations of the test substance in some biologic tissue, typically blood, are plotted versus the exposure time.

ATSDR (Agency for Toxic Substances and Disease Registry): The ATSDR is an agency of the Department of Health and Human Services that was created by Congress under the Comprehensive Environmental Response, Compensation, and Liability Act of 1980 (CERCLA), commonly known as the Superfund Act. Its mission is to serve the public by using the best science, taking responsive public health actions, and providing trusted health information to prevent harmful exposures and disease related to toxic substances. ATSDR defines minimal risk levels (MRLs).6

AUC: See area under the curve.

CDC (Centers for Disease Control and Prevention): The CDC is an agency of the Department of Health and Human Services. The CDC promotes health and quality of life by preventing and controlling disease, injury, and disability. The National Institute of Occupational Safety and Health (NIOSH) is part of the CDC.7

Chronic obstructive pulmonary disease (COPD): COPD is “a disease characterized by chronic bronchitis or emphysema and airflow obstruction that is generally progressive, maybe accompanied by airway hyperreactivity, and may be partially reversible.”10

Continuous exposure guidance level (CEGL): A CEGL is defined as a ceiling concentration designed to prevent any immediate or delayed adverse health effect or degradation in crew performance resulting from a continuous exposure lasting up to 90 days.

Electrostatic precipitator: A system to clear particles and aerosols from air.12

Emergency exposure guidance level (EEGL): An EEGL is defined as a ceiling concentration that will not cause irreversible harm or prevent performance of essential tasks, such as closing a hatch or using a fire extinguisher, during a rare emergency situation lasting 1-24 hours.

Forced expiratory volume (FEV1). FEV1 is a standard test of lung function. It is the volume of air that can be forcibly exhaled in 1 second following a maximal inspiration.11

Forced vital capacity (FVC): FVC is a standard test of lung function. It is the maximal volume of air that can be exhaled as forcibly and rapidly as possible after a maximal inspiration.11

Fumes: Particulate, smoke-like emanations from the surface of heated metals.6

Gas: One of the three states of matter, characterized by very low density and viscosity (relative to liquids and solids); comparatively great expansion and contraction with changes in pressure and temperature; ability to diffuse readily into other gases; and ability to occupy with almost complete uniformity the whole of any container.6

IARC (International Agency for Research on Cancer): IARC is an agency of the World Health Organization. IARC’s carcinogenicity classifications are as follows:13

Group 3. The agent (mixture, or exposure circumstance) is not classifiable as to carcinogenicity in humans.

Group 4. The agent (mixture, exposure circumstance) is probably not carcinogenic to humans.

Irritant: A toxicant that exerts its deleterious effects by causing inflammation of mucous membranes on contact. Irritants principally act on the respiratory system and can cause death from asphyxiation due to lung edema.14

LC01: Lethal concentration in 1% of the sample population.

LC50: Lethal concentration in 50% of the sample population.

Lowest effect level: The lowest dose or exposure level in a study at which a statistically or biologically significant effect is observed in the exposed population compared with an appropriate unexposed control group.15

Lowest-observed-adverse-effect level (LOAEL): A LOAEL is the “lowest exposure level at which there are statistically or biologically significant increases in frequency or severity of adverse effects between the exposed population and its appropriate control group.”16

Minimal risk level (MRL): ATSDR’s “estimate of daily human exposure to a hazardous substance at or below which that substance is unlikely to pose a measurable risk of harmful (adverse), noncancerous effects. MRLs are calculated for a route of exposure (inhalation or oral) over a specified time period (acute, intermediate, or chronic).”17

No-observed-adverse-effect level (NOAEL): A NOAEL is “an exposure level at which there are no statistically or biologically significant increases in the frequency or severity of adverse effects between the exposed population and its appropriate control; some effects may be produced at this level, but they are not considered as adverse, nor precursors to specific adverse effects. In an experiment with several NOAELs, the regulatory focus is primarily on the highest one leading to the common usage of the term NOAEL as the highest exposure without adverse effect.”17

No-observed-effect level (NOEL): A NOEL is the “greatest concentration or amount of a substance, found by experiment or observation, that causes no alterations of morphology, functional capacity, growth, development, or life span of target organisms distinguishable from those observed in normal (control) organisms of the same species and strain under the same defined conditions of exposure.”19

OSHA (Occupational Safety and Health Administration): OSHA is an agency of the U.S. Department of Labor. It is authorized to set workplace health and safety standards for a wide variety of physical and chemical hazards and occupational situations. OSHA establishes permissible exposure limits (PELs) for a typical 8-hour workday within a 40-hour workweek and short-term exposure limits (STELs) applicable to a 15-min period within a workday.20

Permissible exposure limit (PEL): A PEL is the “maximum amount or concentration of a chemical that a worker may be exposed to under OSHA regulations.”21 According to OSHA regulations, the permissible exposure limit–time-weighted average (PEL-TWA) is a regulatory standard for a particular chemical expressed as “an average value of exposure over the course of an 8 hour work shift.”22

Recommended exposure limit (REL): A REL is “an 8- or 10-h time-weighted average (TWA) or ceiling concentration recommended by NIOSH that is based on an evaluation of the health effects data.”22

Reference concentration (RfC): EPA’s estimate of “air exposure concentration to the human population (including sensitive subgroups) that is likely to be without appreciable risk of deleterious effects during a life-time.”23

Reversible effect: An injury from which a target tissue or organ can recover or regenerate.

Short-term exposure limit (STEL): As defined by ACGIH, a STEL is a “15-minute TWA exposure for a regulated chemical that should not be exceeded at any time during a workday, even if the 8-hour TWA is within the TLV-TWA or PEL-TWA.”22

Spacecraft maximum allowable concentrations (SMACs): SMACs are “concentrations of airborne substances (such as gas, vapor, or aerosol) that will not compromise the performance of specific tasks during emergency conditions. Exposure to 24-h SMACs will not cause serious or permanent effects but may cause reversible effects that do not impair judgment or interfere with proper responses to emergencies such as fires or accidental releases. Long-term SMACs (e.g., 7 day) are intended to avoid adverse health effects (either immediate or delayed) and to avoid degradation in crew performance with continuous exposure in a closed space-station environment. SMACs were developed for astronauts (healthy individuals).”26

Subchronic exposure: An exposure lasting 2-13 weeks or 10% of the test animal life-span.3

Submarine escape action levels (SEALs): At concentrations below a SEAL 1, respiratory and central nervous system function should not be impaired enough to significantly affect the ability to escape or to be rescued, and crew members can remain in the submarine without wearing eye and respiratory protection (EABs) for up to 10 days. At and above SEAL 1, but below SEAL 2, respiratory and central nervous system effects should not be severe enough to hamper ability to escape, and crew members would not be required to wear EABs but would plan to escape so that the last man leaves the submarine within 24 h. At and above a SEAL 2, unprotected exposure to the gas can result in impairment to respiratory and central nervous system function to an extent that the ability to escape would be compromised, and crew members should be required to wear EABs.9

Threshold Limit Value (TLV): A TLV is the “concentration in air of a substance to which it is believed that most workers can be exposed daily without adverse effect (the threshold between safe and dangerous concentrations). These values are established (and revised annually) by the American Conference of Governmental Industrial Hygienists and are time-weighted concentrations for a 7- or 8-hour workday and a 40-hour workweek.”20

Time-weighted average (TWA): Under OSHA regulations, a TWA is the average concentration of a regulated chemical to which a worker may be repeatedly exposed during a conventional 8-h workday and a 40-h workweek without adverse effect.

Uncertainty factor (UF): A UF (e.g., 1, 2, 3, or 10) can be used when deriving human health risk reference values from experimental data to account for inter- or intraspecies differences, database gaps, extrapolations from high to low dose, or other adjustments required. Multiple UFs can be used in a calculation. A UF of 10 is considered to be a health-protective default value to be employed when little is known about a particular source of variability or uncertainty, such as intraspecies differences or lack of information on a relevant health effect. As additional research becomes available, UFs change as indicated by the new information.

Vent fog precipitator: A system used in the submarine engine room to clear the air of oil mists. 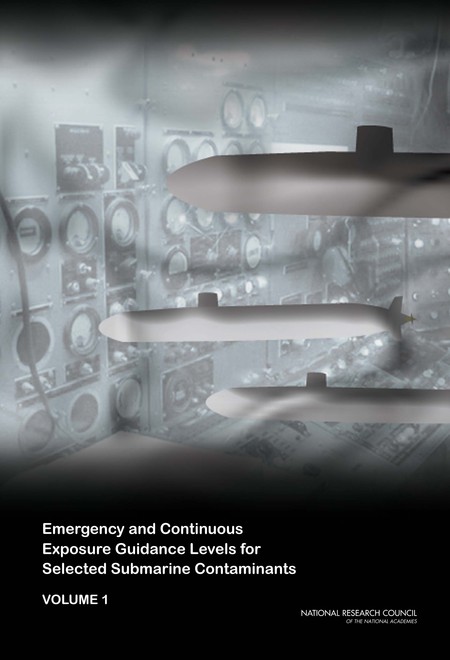 U.S. Navy personnel who work on submarines are in an enclosed and isolated environment for days or weeks at a time when at sea. Unlike a typical work environment, they are potentially exposed to air contaminants 24 hours a day. To protect workers from potential adverse health effects due to those conditions, the U.S. Navy has established exposure guidance levels for a number of contaminants. The Navy asked a subcommittee of the National Research Council (NRC) to review, and develop when necessary, exposure guidance levels for 10 contaminants.

Overall, the subcommittee found the values proposed by the Navy to be suitable for protecting human health. For a few chemicals, the committee proposed levels that were lower than those proposed by the Navy. In conducting its evaluation, the subcommittee found that there is little exposure data available on the submarine environment and echoed a previous recommendation from an earlier NRC report to conduct monitoring that would provide a complete analysis of submarine air and data on exposure of personnel to contaminants.