Get This Book
Visit NAP.edu/10766 to get more information about this book, to buy it in print, or to download it as a free PDF.
« Previous: The Magnetic Sun
Page 16 Share
Suggested Citation:"Earth's Dynamic Magnetic Shield." National Research Council. 2004. Understanding the Sun and Solar System Plasmas: Future Directions in Solar and Space Physics. Washington, DC: The National Academies Press. doi: 10.17226/11188.
×

The solar wind does not impact Earth directly but is deflected—like a stream diverted around a boulder—by our planet’s magnetic field, which forms a tear-drop-shaped cavity in the solar wind flow. This cavity—the magnetosphere—contains highly dilute plasmas whose behavior is controlled by Earth’s magnetic field and its interaction with the solar wind. Its size depends on the velocity and density of the solar wind and on the IMF. The magnetosphere typically extends to around 10 times the radius of Earth in the sunward or “upstream” direction, and hundreds of Earth radii in the direction away from the Sun, or “downstream.” (1 Earth radius = 6,378 kilometers.)

How the magnetosphere responds to the continuous buffeting by the solar wind depends strongly on the direction and strength of the IMF. Put simply, like poles repel and opposites attract. When the magnetic orientation of the IMF is opposite that of Earth’s magnetic field on the sunward face of the magnetosphere, the two magnetic fields slam together and can cancel each other out. This annihilation process is called magnetic reconnection. Reconnection is the primary process by which Earth’s magnetic shield is breached and energy transferred from the solar wind to the magnetosphere. This transfer of energy in turn drives the flow of plasma within the magnetosphere and leads to the buildup of magnetic energy in the magnetotail—the downstream portion of the magnetosphere, which looks a little like the tail of a comet. The energy stored in the tail is then explosively released in events known as magnetospheric substorms. During substorms, the magnetic field lines in the magnetotail behave like elastic bands that are stretched and then abruptly released, snapping back to their original configuration. The reconnection of stretched and stressed magnetic field lines in the tail is an important element of this process. Some of the energy released in substorms drives powerful electrical currents that inject several billion watts of power into the upper atmosphere and produce spectacular displays of the aurora borealis and aurora australis—the northern and southern lights. 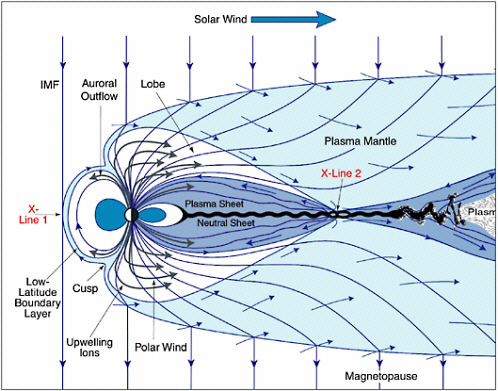 Drawing (not to scale) showing the structure of Earth’s magnetosphere and illustrating the process of reconnection between the interplanetary and geomagnetic fields. Magnetic fields reconnect or annihilate where the fields point in opposite directions, at the sunward boundary of the magnetosphere and downstream of Earth in the magnetotail. At “X-Line 1,” the interplanetary magnetic field (IMF) and the closed geomagnetic field cancel or annihilate, producing open field lines that have one end at Earth and the other in the solar wind. The open field lines are carried by the solar wind downstream of Earth, toward a second reconnection site (X-Line 2) in the magnetotail. The field lines above and below this site have opposite direction and reconnect, producing plasma outflows from the reconnection site both toward and away from Earth.

While the importance of reconnection is widely recognized and its effects well-known, scientists still do not fully understand how oppositely directed magnetic field lines cancel themselves out at reconnection sites. Achieving this understanding requires in situ measurement of charged particles, and of electric and magnetic fields at the reconnection site. Such measurements are challenging, owing to the small size of the sites, and must be made simultaneously from multiple vantage points. The exploration of these localized regions surrounding reconnection sites is one of the principal objectives of the Magnetospheric Multiscale (MMS) mission, a four-spacecraft Solar Terrestrial Probe designed to study microphysical processes in key boundary regions of Earth’s magnetosphere, from the subsolar magnetopause to the high-latitude magnetopause, and from the near-Earth magnetotail to its most remote regions. In addition to reconnection, MMS will study the roles of particle acceleration and turbulence in the transfer of energy within and across magnetospheric boundaries. MMS is the Survey Committee’s highest-priority initiative in the moderate-cost category. 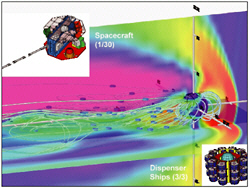 The Magnetospheric Constellation mission’s fleet of microsatellites will provide information about the large-scale structure and dynamics of the magnetosphere by acquiring data at multiple locations simultaneously. 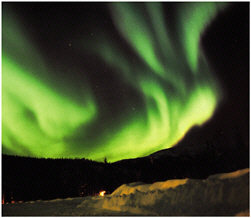 The northern and southern lights are dramatic visible manifestations of disturbances in the invisible plasmas of Earth’s magnetosphere.

The circulation of energy through plasmas occurs throughout the universe, in solar flares, in planetary magnetospheres, and in protostars, as well as in Earth’s magnetosphere. In Earth’s magnetosphere, researchers can measure the flow of energy directly, but the system is so vast and dynamic that localized measurements from individual satellites are of little use in capturing the overall dynamic behavior and structure of the magnetosphere. The Magnetospheric Constellation (MagCon) mission will solve this problem by deploying dozens of small, autonomous microsatellites to perform continuous measurements of the magnetospheric plasma and magnetic fields. These measurements will provide the “pixels” from which the “big picture” of the entire magnetosphere can be composed. Computer modeling and theory will play a critical role in integrating the data pixels into a coherent depiction of magnetospheric dynamics. 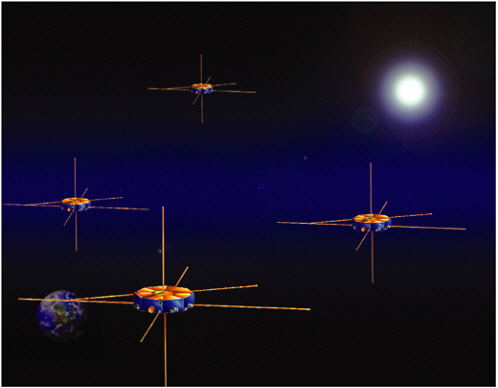 Next: The Threshold of Space: Earth's Upper Atmosphere »
Understanding the Sun and Solar System Plasmas: Future Directions in Solar and Space Physics Get This Book
× 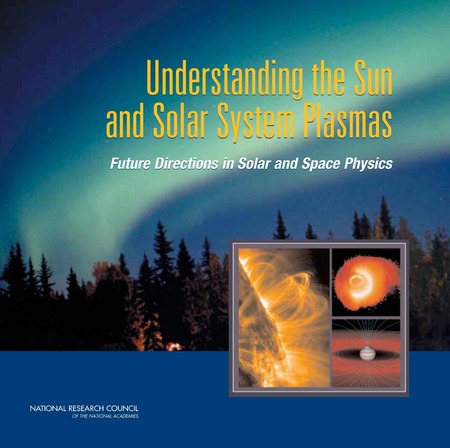