Visit NAP.edu/10766 to get more information about this book, to buy it in print, or to download it as a free PDF.
Page i Share Cite
Suggested Citation:"Front Matter." National Research Council. 2005. Health Implications of Perchlorate Ingestion. Washington, DC: The National Academies Press. doi: 10.17226/11202.
×

THE NATIONAL ACADEMIES PRESS 500 Fifth Street, NW Washington, DC 20001 NOTICE: The project that is the subject of this report was approved by the Governing Board of the National Research Council, whose members are drawn from the councils of the National Academy of Sciences, the National Academy of Engineering, and the Institute of Medicine. The members of the committee responsible for the report were chosen for their special competences and with regard for appropriate balance. This project was supported by Contract 68-C-03-081 between the National Academy of Sciences and the U.S. Environmental Protection Agency, U.S. Department of Defense, U.S. Department of Energy, and National Aeronautics and Space Administration. Any opinions, findings, conclusions, or recommendations expressed in this publication are those of the author(s) and do not necessarily reflect the view of the organizations or agencies that provided support for this project. International Standard Book Number 0-309-09568-9 (Book) International Standard Book Number 0-309-54811-X (PDF) Library of Congress Control Number 2005925051 Additional copies of this report are available from The National Academies Press 500 Fifth Street, NW Box 285 Washington, DC 20055 800-624-6242 202-334-3313 (in the Washington metropolitan area) http://www.nap.edu Copyright 2005 by the National Academy of Sciences. All rights reserved. Printed in the United States of America

OTHER REPORTS OF THE BOARD ON ENVIRONMENTAL STUDIES AND TOXICOLOGY Air Quality Management in the United States (2004) Endangered and Threatened Species of the Platte River (2004) Atlantic Salmon in Maine (2004) Endangered and Threatened Fishes in the Klamath River Basin (2004) Cumulative Environmental Effects of Alaska North Slope Oil and Gas Development (2003) Estimating the Public Health Benefits of Proposed Air Pollution Regulations (2002) Biosolids Applied to Land: Advancing Standards and Practices (2002) The Airliner Cabin Environment and Health of Passengers and Crew (2002) Arsenic in Drinking Water: 2001 Update (2001) Evaluating Vehicle Emissions Inspection and Maintenance Programs (2001) Compensating for Wetland Losses Under the Clean Water Act (2001) A Risk-Management Strategy for PCB-Contaminated Sediments (2001) Acute Exposure Guideline Levels for Selected Airborne Chemicals (4 volumes, 2000- 2004) Toxicological Effects of Methylmercury (2000) Strengthening Science at the U.S. Environmental Protection Agency (2000) Scientific Frontiers in Developmental Toxicology and Risk Assessment (2000) Ecological Indicators for the Nation (2000) Waste Incineration and Public Health (1999) Hormonally Active Agents in the Environment (1999) Research Priorities for Airborne Particulate Matter (4 volumes, 1998-2004) The National Research Councilâs Committee on Toxicology: The First 50 Years (1997) Carcinogens and Anticarcinogens in the Human Diet (1996) Upstream: Salmon and Society in the Pacific Northwest (1996) Science and the Endangered Species Act (1995) Wetlands: Characteristics and Boundaries (1995) Biologic Markers (5 volumes, 1989-1995) Review of EPA's Environmental Monitoring and Assessment Program (3 volumes, 1994- 1995) Science and Judgment in Risk Assessment (1994) Pesticides in the Diets of Infants and Children (1993) Dolphins and the Tuna Industry (1992) Science and the National Parks (1992) Human Exposure Assessment for Airborne Pollutants (1991) Rethinking the Ozone Problem in Urban and Regional Air Pollution (1991) Decline of the Sea Turtles (1990) Copies of these reports may be ordered from the National Academies Press (800) 624-6242 or (202) 334-3313 www.nap.edu vii

Preface In 1985, perchlorate contamination was discovered at Superfund sites in California; however, the extent of perchlorate contamination of water sources nationwide was not revealed until 1997. Today, over 11 million people have perchlorate in their public drinking-water supplies at concentra- tions of 4 ppb (4 :g/L) or higher. Because of the controversy surrounding the concentration at which perchlorate should be regulated, the Department of Defense (DOD), the Department of Energy (DOE), the National Aeronautics and Space Administration (NASA), and the Environmental Protection Agency (EPA) asked the National Research Council to assess the potential adverse health effects of perchlorate ingestion from clinical, toxicologic, medical, and public-health perspectives. In this report, the Committee to Assess the Health Implications of Perchlorate Ingestion reviews the current state of the science regarding potential adverse health effects of perchlorate exposure. Specifically, the committee evaluated human clinical and epidemiologic studies and animal toxicology studies, and determined the relevance of the animal studies for predicting adverse effects in humans, especially sensitive populations. The committee also assessed perchlorate concentrations at which chronic inhibition of iodide uptake and subsequent changes in thyroid hormone production might lead to adverse health effects in humans. As a final task, the committee reviewed and determined whether EPAâs findings in its 2002 draft risk assessment, Perchlorate Environmental Contamination: Toxico- logical Review and Risk Characterization, are consistent with current scientific evidence. Recommendations are provided for scientific research that could reduce uncertainty in the understanding of human health effects associated with low-level perchlorate ingestion. This report has been reviewed in draft form by persons chosen for their diverse perspectives and technical expertise in accordance with procedures ix

x Preface approved by the National Research Councilâs Report Review Committee. The purpose of this independent review is to provide candid and critical comments that will assist the perchlorate committee and the Research Council in making the published report as sound as possible and to ensure that the report meets the Research Councilâs standards of objectivity, evidence, and responsiveness to the study charge. The review comments and draft manuscript remain confidential to protect the integrity of the deliberative process. We wish to thank the following people for their review of this report: Michael Aschner, Vanderbilt University Medical Center; Gerard Burrow, Yale University School of Medicine; George Daston, Proctor and Gamble Company; Kelly Dix, Lovelace Respiratory Research Institute; Ronald Estabrook, The University of Texas Southwest- ern Medical Center; Ellen Gold, University of California, Davis; Philip Landrigan, Mount Sinai School of Medicine; Gilbert Omenn, University of Michigan Medical School; Louise Ryan, Harvard School of Public Health; Rudi Schmid, Retired; Jerrold Ward, National Institutes of Health; and E. Dillwyn Williams, University of Cambridge. Although the reviewers listed above have provided many constructive comments and suggestions, they were not asked to endorse the conclusions or recommendations, nor did they see the final draft of the report before its release. The review of this report was overseen by John C. Bailar and Floyd Bloom. Appointed by the National Research Council, they were responsible for making certain that an independent examination of the report was carried out in accordance with institutional procedures and that all review comments were carefully considered. Responsibility for the final content of the report rests entirely with the committee and the National Research Council. The committee gratefully acknowledges the persons who made presentations at the committeeâs public meetings (see Appendix C) and Raymond York, of Argus Laboratories, for providing the committee with original data from selected animal toxicology studies. The committee also thanks the sponsor representatives who responded to data requests and provided background materials: Lisa Matthews, Annie Jarabek, and William Farland, EPA; Daniel Rogers and Jeff Cornell, DOD; Richard Williams and Richard Wickman, NASA; and Patrice Bubar, Karen Guevara, Blaine Rowley, and Mark Frei, DOE. The committee is especially grateful for the consistently strong and knowledgeable assistance of the National Research Council staff in pre- paring this report, particularly Ellen Mantus, project director, but also James Reisa, director of the Board on Environmental Studies and Toxicology; Roberta Wedge, program director for risk analysis; Mary Fox, program

Preface xi officer, Jennifer Saunders, research associate, Mirsada Karalic-Loncarevic, research associate; Ruth E. Crossgrove, senior editor; Norman Grossblatt, senior editor; Bryan Shipley, research associate; and Robert Policelli and Laura Waters, project assistants. Finally, I thank the members of the committee for their commitment to the breadth and importance of our task and their dedication to deriving conclusions and recommendations based only on the best available sci- entific evidence. Richard B. Johnston, Jr. Chair, Committee to Assess the Health Implications of Perchlorate Ingestion

xvi Contents 1-2. Perchlorate Drinking-Water Concentrations Based on Monitoring Data from Unregulated Contaminant Monitoring Rule as of May 2004, 25 2-1. 24-Hour Thyroid Radioiodide Uptake in Healthy Subjects before, during, and after Oral Administration of Potassium Perchlorate for 14 Days, 64 3-1. Summary of Epidemiologic Studies, 78 4-1. Thyroid Histopathology in Control Dams and Dams Given Four Doses of Perchlorate, 123 4-2. Thyroid Histopathology in Control and Perchlorate-Exposed Fetuses and Pups, 123 4-3. Summary of Morphometric Findings in Rat Pups Exposed to Perchlorate, 128 6-1. Protocol for Controlled Clinical Study, 185 6-2. Three-Month Dose-Range Finding Toxicity Study in Cynomolgus Monkeys, 186 6-3. One-Year Chronic Toxicity Study in Cynomolgus Monkeys, 187 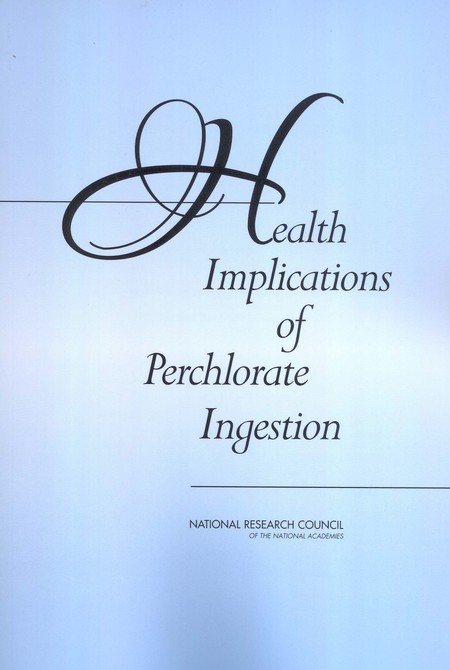 Perchlorate—a powerful oxidant used in solid rocket fuels by the military and aerospace industry—has been detected in public drinking water supplies of over 11 million people at concentrations of at least 4 parts per billion (ppb). High doses of perchlorate can decrease thyroid hormone production by inhibiting the uptake of iodide by the thyroid. Thyroid hormones are critical for normal growth and development of the central nervous system of fetuses and infants. This report evaluates the potential health effects of perchlorate and the scientific underpinnings of the 2002 draft risk assessment issued by the U.S. Environmental Protection Agency (EPA).

The report finds that the body can compensate for iodide deficiency, and that iodide uptake would likely have to be reduced by at least 75% for months or longer for adverse health effects, such as hypothryroidism, to occur. The report recommends using clinical studies of iodide uptake in humans as the basis for determining a reference dose rather than using studies of adverse health effects in rats that serve as EPA’s basis. The report suggests that daily ingestion of 0.0007 milligrams of perchlorate per kilograms of body weight—an amount more than 20 times the reference dose proposed by EPA—should not threaten the health of even the most sensitive populations.