Get This Book
Visit NAP.edu/10766 to get more information about this book, to buy it in print, or to download it as a free PDF.
« Previous: Front Matter
Page 1 Share Cite
Suggested Citation:"Executive Summary." Institute of Medicine. 2005. Vaccine Safety Research, Data Access, and Public Trust. Washington, DC: The National Academies Press. doi: 10.17226/11234.
×

The Vaccine Safety Datalink (VSD) is a large linked database that was created in 1991 to fill a void in the ability of the United States to study vaccine safety issues. The VSD was developed through the collaborative efforts of the National Immunization Program (NIP) at the Centers for Disease Control and Prevention (CDC) and several private managed care organizations (MCOs) (Chen et al., 1997). The VSD is a unique national resource for evaluating vaccine safety. It includes data from administrative records for more than 7 million members of eight MCOs (Davis, 2004). The VSD database links data on patient characteristics, health outcomes (according to data resulting from inpatient, outpatient, and emergency-room records), and vaccination history (vaccine type, date of vaccination, manufacturer, lot number, and injection site) (Davis, 2004). The VSD can be a valuable tool for the retrospective assessment of vaccine safety because the number of people included is large, they generally receive most of their health services at the MCOs, and demographic, health outcome, and vaccination data are maintained electronically.

The opportunities offered by the VSD for thorough investigations of vaccine safety concerns and well-designed, planned, retrospective vaccine studies have led to heightened interest in the results of VSD studies and sometimes in the VSD data themselves. A few researchers interested in particular vaccine safety hypotheses also have shown interest in accessing and analyzing VSD data. The interest in the VSD shown by researchers, advocacy groups, members of Congress, and others has brought in-

creasing attention to its use, its limitations, and the implications of studies that were conducted through the analysis of its data.

Throughout the first decade of the VSD’s existence, researchers from the NIP and the MCOs participating in the VSD collaborated on studies that used VSD data. During that time, there was no way for an independent external researcher who did not pursue a collaborative relationship with a NIP-affiliated or MCO-affiliated researcher to use the VSD. In 2002, after requests by independent external researchers that VSD data be made available, the NIP announced the creation of the VSD data sharing program (CDC, 2004d). The VSD data sharing program guidelines (CDC, 2002, 2003a, 2004a,b,c) have been revised multiple times since the inception of the program.

Concerns about data sharing were stimulated in part by public concern over a study initiated in 1999 using VSD data. In fall 1999, researchers at the NIP began a screening study using VSD data to investigate whether exposure to thimerosal in vaccines (to which it was added as a preservative) was associated with neurodevelopmental disorders (DeStefano, 2004; Verstraeten et al., 2003a). Some members of the general public have criticized the thimerosal screening study for changes in the original study protocol, changes in eligibility criteria, the selective official release of preliminary findings, and the inclusion of vaccine-manufacturer representatives in a meeting intended to provide external expert review of the study (Bernard, 2004).

CHARGE TO THE COMMITTEE

The Institute of Medicine Committee on the Review of the National Immunization Program’s Research Procedures and Data Sharing Program was asked to address the following charge:1

(1a) review the design and the implementation to date of the new Vaccine Safety Datalink Data Sharing Program to assess compliance with the current standards of practice for data sharing in the scientific community and (1b) make recommendations to the National Immunization Program and the National Center for Health Statistics for any needed modifications that would facilitate use, ensure appropriate utilization, and protect confidentiality; and (2a) review the iterative approaches to conducting analysis that are characteristics of studies using the complex, automated

Vaccine Safety Datalink system. Examples of recent studies to be examined are a completed screening study on thimerosal and vaccines (Verstraeten et al.) and cohort studies on asthma; (2b) review whether, when, and how preliminary findings about potential vaccine-related risks obtained from the Vaccine Safety Datalink system should be shared with other scientists, communicated to the public, and used to make policy or recommendations to CDC; and (2c) make recommendations to the National Immunization Program on the release of such preliminary findings in the future.

The charge was expanded to include the National Center for Health Statistics (NCHS) in part 1 because organizational responsibility for the VSD data sharing program was transferred from the NIP to NCHS in March 2004.

Concerns about trust and how the public perceives the reliability of findings based on VSD data have spilled over from the NIP’s analyses to the development and implementation of the VSD data sharing program. Taking steps to improve the independence, transparency, and fairness of VSD procedures while continuing to protect confidentiality will help to

The VSD is a public resource that is designed to inform important public health policy decisions. Though it is a resource supported by public funds, there are restrictions on access because the data are provided by and remain the property of private MCOs. By the very nature of its potential to influence policy, the public demands and deserves access to the data used to influence those decisions and transparency in the processes that permit or restrict access. If the VSD is intended to be used as a foundation of policy decisions, there is a public need to share data fairly and to be as transparent as possible while protecting the confidentiality of individually identifiable information in the VSD. Confidentiality protections must not be jeopardized; a single breach of confidentiality, no matter how minor, could undermine the contractual arrangements between the MCOs and the NIP and lead to the termination of cooperation and the loss of a unique resource of potentially great national value.

The committee determined that it could not adequately address issues of independence, transparency, fairness, and protection of confidentiality without examining how the VSD research process supports or hinders the application of those principles. When concerns arise about the independence and transparency, in particular, of the general VSD research process, those concerns spill over to people’s perception of the independence and transparency of the VSD data sharing program and of the determinations about whether, when, and how to release VSD preliminary findings. To provide the most appropriate and useful recommendations requested in its charge, the committee believed that it had to consider how the VSD research plan, the priority-setting of VSD studies, and the VSD peer-review process affect the VSD data sharing program and the release of preliminary findings.

The committee’s recommendations are related to four main topics: the VSD data sharing program; the release of preliminary findings based on VSD data; independent review of VSD activities; and the applicability of the Shelby Amendment and Information Quality Act to VSD data and VSD preliminary findings.

Reflecting on all the information gathered throughout its study, the committee finds that the VSD data sharing program has three short-term goals:

On the basis of those three goals, the committee developed its recommendations related to the VSD data sharing program in the following framework:

The VSD and the VSD data sharing program have a number of limitations. Because VSD data come from administrative databases of the MCOs, additional data collection (for example, medical-chart reviews) or data cleaning must be done before the automated data are suitable for many specific research studies. For new vaccine safety studies, the VSD data sharing program allows external researchers access only to automated data and only to data from before 2001 (CDC, 2004a). Because the quality of automated data cannot be guaranteed, the inclusion of chart-review-verified data in new vaccine safety studies improves the quality of such studies. Chart-review-verified data can be obtained only by collaborating

All the committee’s recommendations related to the VSD data sharing program can be found in Box ES-1 at the end of this executive summary.

RELEASE OF PRELIMINARY FINDINGS BASED ON VACCINE SAFETY DATALINK DATA

Solely internal peer-review processes may be needed when preliminary findings could have a substantial impact on public health. The need to release preliminary findings rapidly may force a decision to limit peer review to peers inside the federal government, but if so, the internal peer review should be as extensive as possible. In such situations, purely internal review should be followed by external review on an expedited schedule. In the case of the VSD, however, the committee finds that because the data are incorporated into the VSD data files annually rather than continually, there will rarely be situations in which preliminary findings are so urgent that they cannot undergo independent external peer review.

All the committee’s recommendations related to the release of preliminary findings based on VSD data can be found in Box ES-1 at the end of this executive summary.

proposals and of determinations about the release of preliminary findings from VSD analyses. The lack of transparency of some of the processes also affects the trust relationship between the NIP and the general public. To address some of those concerns, the committee recommends that two independent groups be used.

The committee makes other recommendations throughout its report that focus on specific issues related to the VSD data sharing program and the determination of whether, when, and how to release preliminary findings. However, the committee’s recommendations regarding independent oversight of VSD-related activities are the primary means of improving transparency and ensuring fair implementation of processes, practices, and policies related to VSD access, and thereby enhancing public trust in the use of the VSD to answer vaccine safety questions.

The VSD database has many strengths, but it also has limitations. The value of the VSD data sharing program will be enhanced by easy access to

the data, so that a variety of researchers can conduct a range of studies and have their findings reviewed by peers and discussed in ways conducive to the advancement of knowledge about vaccine safety. The VSD is a valuable resource for the nation. Efforts should be made to facilitate access to VSD data and their appropriate utilization, while protecting the confidentiality of information contained therein. Ensuring the independence, transparency, and fairness of VSD research activities is important for ensuring public trust in the VSD as a tool for addressing critical vaccine safety questions. 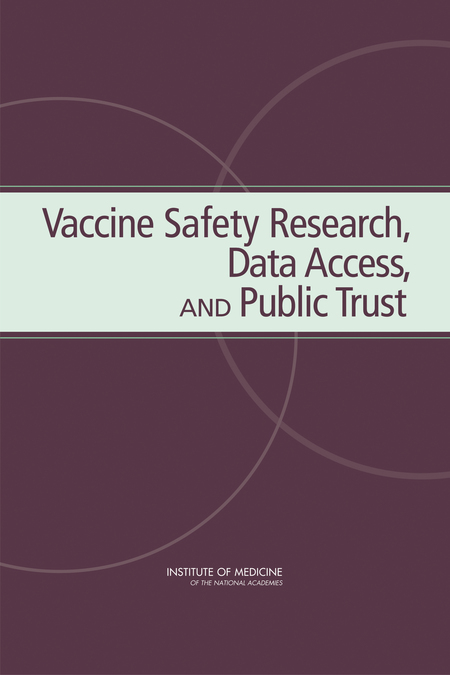 The Vaccine Safety Datalink (VSD) is a large, linked database of patient information that was developed jointly by CDC and several private managed care organizations in 1991. It includes data on vaccination histories, health outcomes, and characteristics of more than 7 million patients of eight participating health organizations. Researchers from CDC and the managed care groups have used VSD information to study whether health problems are associated with vaccinations. The subsequent VSD data sharing program was launched in 2002 to allow independent, external researchers access to information in the database.

In this report, the committee that was asked to review aspects of this program recommends that two new oversight groups are needed to ensure that the policies and procedures of the VSD and its data sharing program are implemented as fairly and openly as possible.