Water Conservation, Reuse, and Recycling: Proceedings of an Iranian-American Workshop (2005)

Get This Book
Visit NAP.edu/10766 to get more information about this book, to buy it in print, or to download it as a free PDF.
« Previous: Agricultural Drought Management in Iran--Sayed-Farhad Mousavi
Page 114 Share Cite
Suggested Citation:"Coping with Drought--John Letey." National Research Council. 2005. Water Conservation, Reuse, and Recycling: Proceedings of an Iranian-American Workshop. Washington, DC: The National Academies Press. doi: 10.17226/11241.
×

Storage enables water saved during wet years to be made available during dry years. Thus, a large storage capacity can moderate the impact of drought. Reservoirs are one commonly recognized form of storage. Groundwater can also be considered to be stored water. In some cases, the full storage capacity for groundwater is not fully exhausted by the natural hydrologic process. Engineering the system to purposely move surface water into subsurface aquifers is a means of increasing storage.

When large amounts of groundwater and other forms of stored water are available, the impacts of drought can be reduced. Nevertheless, under an extended very dry period the normal demand for water cannot be fully accommodated by withdrawing stored water supplies. Therefore, some decrease in demand is required.

The users of water can be broadly categorized into three groups: urban, agricultural, and fish and wildlife. Very efficient water resource management, which is particularly critical during a drought period, depends upon willingness and opportunity for these three user groups to cooperate. Cooperation could entail, among other things, transferring water supplies among user groups. For fish and wildlife, it also might involve having relaxed environmental regulations during dry periods.

Although there are opportunities to decrease demands in all sectors of society, this discussion will only address agriculture. Various options are available for a farmer whose water supplies have been reduced. The options vary depending on whether the farm grows perennial crops, annual crops, or a combination of the two. Annual crops allow the greatest flexibility because they can be selected based on their seasonal water demand. Crops have different seasonal water demands, and those with the least demand can be selected for planting. Another choice is to not plant a crop but leave the land fallow. Depending upon the available water supply, it may be economically beneficial to restrict the acreage planted and irrigate this acreage to achieve high yields rather than to spread the water on the entire farm with yield reductions in all fields.

Some case studies from California on coping with drought will be presented. Each of the case studies involves not only agriculture, but also cooperative arrangements between the agricultural and urban sectors. The vast network of canals in California facilitates the transfer of water between various water users from different locations in the state. Some features of these case studies may not be feasible in other geographic locations that do not have water conveyance systems. In addition, the abundance of both surface and groundwater resources that allow conjunctive use programs may not be present in other places.

California experienced a drought between 1987 and 1992. An emergency state drought water bank was established in 1991 under the direction of the California Department of Water Resources (DWR). DWR offered to purchase water at a price of $125 per acre-foot from any willing seller and then sell water at the price of $175 per acre-foot plus delivery costs. Under this pricing arrangement, 820,000 acre-feet of water were purchased but only 555,000 acre-feet were sold. The excess 265,000 acre-feet were placed in storage for future years. This storage bank was a regulated water bank in which prices would be established by the market. In 1992 DWR operated another water bank under different conditions. To bring buyers and sellers more into balance, DWR purchased water for $50 per acre-foot and sold it for $72 per acre-foot. In addition, DWR only bought water after a purchaser was identified. However, increased precipitation during that year decreased the severity of the problem and largely negated the need for the bank.

Some general results of the bank experience were that about one half of the water that was purchased came from farmers who fallowed their land. Some water came from increasing groundwater use and decreasing surface water use by farmers. In this case, consideration had to be given to the interconnection between surface and groundwater supplies. In some areas increased groundwater pumping lowered the water table creating a hydraulic gradient that drew more water from rivers. In other words, some groundwater use came at the expense of surface water. Waters were transferred both to the urban and agriculture sectors. It was estimated that the urban areas supplied with water had a $91 million benefit. The agricultural areas to which water was transferred received benefits that exceeded losses in the areas that fallowed their land. Crop sales dropped 20 percent in areas that sold water, but it was estimated that the overall third party impacts were not great. However, the third party impacts appeared to be excessively concentrated in certain areas. For example, Yolo County estimated increased unemployment social service costs of $130,000 that they attributed to farm workers who were unemployed because of the fallowed land. However, there was not sufficient evidence to directly link unemployment to fallowed land.

The Arvin-Edison Water Storage District is composed of approximately 132,000 acres of prime agricultural land located southeast of Bakersfield, California. Approximately 100,000 acres are developed as irrigated vineyards, truck crops, potatoes, cotton, citrus, and orchards. The long-term average rainfall in the district is about 8.2 inches per year and occurs largely during winter and spring months. Therefore, agriculture is almost entirely dependent on irrigation. Prior to the transfer of irrigation water to the district from other areas, the absence

of perennial surface streams in the district required that all irrigation water be obtained from groundwater reserves. As a result, considerable groundwater overdraft occurred. The continued lowering of groundwater levels required pumping lifts to exceed 600 feet in many areas of the district. Further, the receding water table, in certain areas, had induced subsurface movement of water with high boron concentrations from the bedrock complex bordering the district to the east into the pumped aquifers underlying the area.

A plan was developed to regulate the erratic water supply to meet an annual irrigation demand schedule. The conceptual plan included a combination of using surface water and groundwater storage. The district has more than one million acre-feet of underground storage capacity to be utilized to regulate the district’s water supply.

A key feature of utilizing the underground storage capacity is the district-operated spreading works. Sycamore Spreading Works comprises a total area of 569 acres and is located on the Sycamore Creek alluvial fan near the middle of the district. The Tejon Spreading Works is located on the Tejon Creek alluvial fan and covers an area of 516 acres. A geological fault line acts as a wall that limits the lateral flow of the aquifer and, therefore, retains the recharged waters within the geographic confines of the district.

One operational difficulty of the Arvin-Edison Water Storage District has been to maintain the spreading basin infiltration rates over prolonged periods of spreading. Methods employed to maintain or restore infiltration rates include (1) periodic drying of the surface, (2) promotion of grass growth on pond surfaces, (3) termination of spreading operations when total suspended solids in the imported water exceeds 25 parts per million (ppm), (4) restriction of vehicular travel within the basins, (5) scarification of surface soils by chiseling or disking, or (6) removal of silt accumulation by mechanical means.

water of unsatisfactory quality. In addition, the build-up of the water table has resulted in reduction in subsurface inflow from neighboring areas and a significant improvement in both groundwater depth and water quality for those irrigators in the district who continue to rely on groundwater.

Because of the success of this project, the district has entered into a 25-year agreement with the Metropolitan Water District of Southern California (MWD) whereby the district will bank approximately 250,000 acre-feet of MWD state water project supply and then return the water to MWD in drought years. In order to accomplish this agreement, new facilities are under construction. These facilities include 500 acres of new spreading ground, 15 groundwater wells, and a 4 1/2-mile bidirectional inertia pipeline connecting the terminus of the district’s south canal with the California Aqueduct. This is an example of a mutual arrangement between the urban and agricultural sectors to stabilize the annual availability of water to offset the impacts of a sustained drought.

The Palo Verde Irrigation District (PVID) is located adjacent to the Colorado River, north of Blythe, California. Both the PVID and MWD have water rights to the Colorado River. Both the PVID Board of Trustees and MWD Board of Directors have approved the principles for a 35-year program that will pay farmers to annually set aside a portion of their land, rotate their crops, and transfer saved water to urban southern California. The approved principles are based on the successful experience of a two-year program between the two districts during the dry years of 1992-1994. The approved principles specify that Palo Verde valley farmers will stop irrigating from 7 to 29 percent of their land in any year at the request of MWD. A range of 25,000 to 111,000 acre-feet per year of water will be made available to urban customers from the reduction in irrigation. The land taken out of production will be maintained and rotated once every one to three years. Thus every farm will continue to irrigate at least 71 percent of its property and none of the farm’s land would be permanently taken out of production. This arrangement is expected to maintain the viability of agriculture and minimize third-party effects.

For each acre set aside, farmers who sign up will receive a one-time payment of $3,170 and then $550 annually beginning in 2002. In addition to payments to individual farmers, MWD has agreed to invest $6 million in local community improvement programs to offset any potential economic impacts from the proposed program.

The case studies presented from California illustrate the benefits of water storage from wet years to partially offset deficiencies during drought years. They also represent cooperative, mutually beneficial arrangements between the urban and agriculture sectors. The conjunctive use of surface and groundwater supplies is well illustrated in the Arvin-Edison water storage program. Although the urban-agricultural water exchange directs water from agriculture to the urban sector, the farmers receive payment for their water to offset some of the losses that naturally occur during drought periods. Several instruments are available to minimize, but not completely eliminate, the economic losses associated with an extended drought period.

Next: The Economics of Agricultural Water Use and the Role of Prices--David Sunding »
Water Conservation, Reuse, and Recycling: Proceedings of an Iranian-American Workshop Get This Book
× 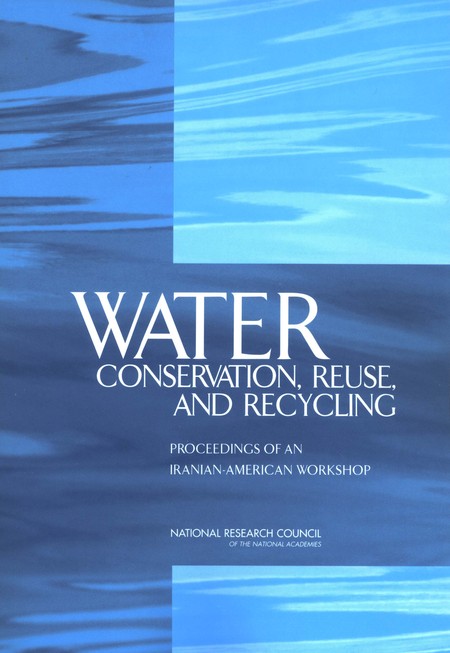 In December 2002, a group of specialists on water resources from the United States and Iran met in Tunis, Tunisia, for an interacademy workshop on water resources management, conservation, and recycling. This was the fourth interacademy workshop on a variety of topics held in 2002, the first year of such workshops. Tunis was selected as the location for the workshop because the Tunisian experience in addressing water conservation issues was of interest to the participants from both the United States and Iran. This report includes the agenda for the workshop, all of the papers that were presented, and the list of site visits.